For my third day in Rome I had a long list of landmarks to see. I began by taking the Metro Line A from Termini Station to the Barberini Station. I easily found my way to the Trevi Fountain which was not crowded. I had precise instructions on how to find the Trevi Fountain in my notes. I then found the Galleria Alberto Sordi but it was not open yet. So I located the Column of Marcus Aurelius next. From there I found the Palazzo Montecitorio, a government building often shown in the Italian news. There was some evidence of that because I saw a RAI van parked there. After that I found the church Santa Maria Maddalena (I told you this would be a long list).

And then I came across the Pantheon. I went inside the Pantheon which is one of the best preserved ancient buildings in Rome. There is free admission because the Pantheon is essentially a church now. Behind the Pantheon is the Piazza della Minerva where the Bernini obelisk on the back of an elephant is located. The church Santa Maria sopra Minerva is also located on this square but I did not enter it on this day. 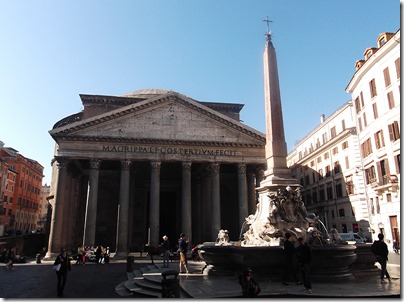 From there I went west to find the Piazza Navona with its three fountains. I did enter the church Sant’Agnese in Agone and saw the shrine for Saint Agnes with her skull. I think that was the first Catholic church I ventured into except for the Pantheon.

North of the Piazza Navona I encountered the museum Palazzo Altemps which I visited. This was one of my more awkward museum visits. I went into the wrong area and went through a scanner which was not meant for museum visitors. The Palazzo Altemps contains mostly sculptures. I saw the Grande Ludovisi Sarcophagus and the Gaul Killing Himself and His Wife. I got yelled at for taking a photo of the Gaul Killing Himself and His Wife but that may have been because it was part of a special exhibit.

After leaving the museum I found the Largo di Torre Argentina, a sunken square with the ruins of four Republican Roman temples. I took lots of photos of those ruins because they are particularly picturesque. The Teatro Argentina is also located on this square so I took a few photos of that since I’m interested in theater. There are many stray cats in the Largo di Torre Argentina and I saw a sign asking you not to feed the cats because they will follow you into traffic. I was very thirsty so I found a small café where I ordered ice cream and bottled water. I took their card so I know it was the Trattoria della Torre Argentina. 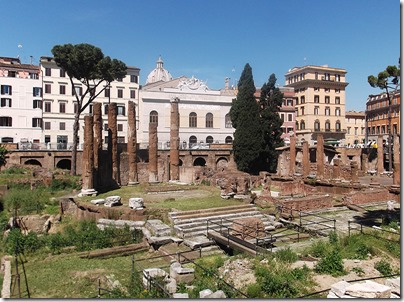 After eating I came across the Il Gesù church which I entered, even though it wasn’t on my list of places to visit. Eventually I found my way to the museum Galleria Doria Pamphilj which was on my list of things to do. This was one of my favorite museums in Rome. I was given an audio guide with my ticket so I used an audio guide for the first time. The audio guide does enhance your visit but it takes more time to get through the museum if you listen to the narration. The Galleria Doria Pamphilj is a palace which now serves as an art gallery since the aristocrats collected so much fine art. It has many furnished period rooms which are extremely elegant. The walls are covered with old paintings making it seem like an eccentric grandparent’s house. The Hall of Mirrors was impressive and the paintings by Caravaggio were special. I really liked the Rest on the Flight to Egypt.

After leaving the Galleria Doria Pamphilj I walked to the Monument of Victor Emmanuel II and saw the Insula Romana, the ruins of an ancient Roman apartment building. Unfortunately the Capitoline Museums were closed. It looked like they were putting out the red carpet for someone but the newspaper reported there was a huge protest which I must have missed. That was not the impression I got. There were official looking cars parked around the Piazza del Campidoglio, lots of police standing around, and some gentlemen in period costume so it looked like there was something going on.

I had to skip the Capitoline Museums so I walked to the Theatre of Marcellus which isn’t far away. The Theatre of Marcellus looks like a smaller version of the Coliseum but you can’t enter it. However there is a pathway through the ruins in the area. I then walked across a bridge to Tiber Island and then into Trastevere. The bridge must have been the Ponte Cestio. This was probably my busiest day in Rome. I can’t believe how much I saw on this day and how far I walked. I saw the Ponte Rotto, the ruins of an ancient bridge in the middle of the Tiber River and I walked across the Tiber Island.

Once in Trastevere I found a restaurant, Taverna Priscinula Pizzeria, where I had the best meal during my trip to Italy. I had the four cheese pizza with truffle sauce. This pizza was unlike any pizza I’ve ever eaten. It was insanely good! The crust was very thin and crispy. I was able to eat a whole pie without feeling full because the crust was that thin. I think it was the truffle sauce that made this pizza so tasty. After eating I walked along Viale di Trastevere and eventually stumbled across Porta Portese. I then walked all the way to the Pyramid of Cestius and Porta San Paolo which was much further than I intended to go. All this walking was killing my feet which had big blisters.

I knew the Protestant Cemetery was in the area so I decided to visit the cemetery even though it was on my itinerary for another day. It was very hard to find the entrance. I should have indicated that in my notes. I walked all the way around the walls of the cemetery until I found the entrance in the back. The main reason for visiting the Protestant Cemetery is to see the graves of John Keats and Percy Bysshe Shelley. I found John Keats’ grave easily enough but I had to buy a guide book at the gift shop to find the grave of Percy Bysshe Shelley. The Protestant Cemetery is a lovely and quiet place even if it is filled with tombstones. I’m not very familiar with the poetry of Keats and Shelley but I’ve read a few of their poems in old Harvard Classics books that the family has owned forever. I was pleased to make this literary pilgrimage. I plan to read biographies of John Keats and Percy Bysshe Shelley. In fact, the biography of Percy Bysshe Shelley has a photo of his grave on the cover just like photo I took of his grave. Keat’s epitaph is very moving, “Here lies One Whose Name was writ in Water” which I interpret as a comment on how impermanent life and fame can be, in contrast to having one’s name writ in stone as the Roman emperors were. 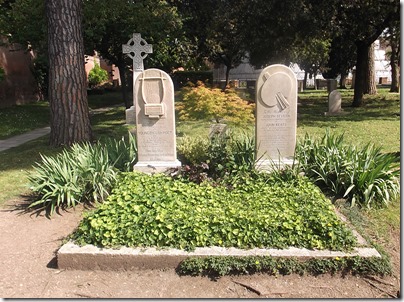 That was finally enough for one day so I took the Metro Line A from Pyramid Station to Termini Station. Ristorante Donati must be closed on Tuesdays so I went to the Ristorante Mino instead. After being seated I saw several groups of tourists being led upstairs. I was wondering if there was something significant upstairs but I guess this restaurant just caters to tour groups. I ordered scampi which didn’t have  much meat and crème brulee with white house wine.