I’ve just returned from the Oktoberfest celebration held in Mifflinburg PA. It was a beautiful day with clear skies and crisp fall weather. The sun was bright and you could get hot in the sun but the air was cool. I’ve bought a few tourist guidebooks to help me explore Pennsylvania but none of them include Mifflinburg. However, Mifflinburg once again struck me as being one of the most charming areas of the state. The town itself has many fine old buildings along the main street with classic storefronts. Along Route 45 you will see many large farms with huge barns and grain silos, surrounded by fields of corn. The Mifflinburg area has authentic Pennsylvanian charm. It is sort of like Lancaster but without the tourists. This town is to the west of Lewisburg, only one hour from Williamsport.

The Oktoberfest event was held in the VFW Fair Grounds to the west of the town on Route 45. It was just a field like where carnivals are sometimes set up. You could say the Oktoberfest was like a small German themed carnival. There were a few food stands, some large beer hall tents, and a few other stands. The cars were parked on the grass.

I bought a 2010 Mifflinburg Oktoberfest Collector Stein and two beer tickets but I did not actually have anything to drink. I was reluctant to drink any alcoholic beverages because I had an hour drive home and did not plan on staying long. I bought enough food to feel full anyways. I had a bratwurst with sauerkraut, some ice cream, a funnel cake, and a Pepsi. 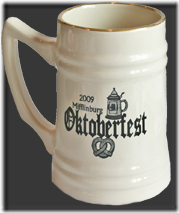 After eating all that food I watched the Black Run Bohemian Dancers perform many traditional German dances in traditional German costumes. I did not see any Amish or Mennonite farmers in the crowd so they either avoid Oktoberfests or there aren’t really that many in the area. Maybe the farms are all dairy farms. When the dancing was done I bought a bag of roasted peanuts and left. There was an old farm behind the field and I could see miles of corn fields and farmland surrounded by mountains. It was very picturesque. On the drive home I saw a farmer’s market, a large garden store with a huge greenhouse, and a farm that seemed to be selling antiques. In other words, this rural area seems to be worth exploring if you are looking for someplace like Lancaster only without the buses of tourists.

This entry was posted in General, German, Travel and tagged Mifflinburg, Oktoberfest, Pennsylvania. Bookmark the permalink.

One Response to Mifflinburg Oktoberfest 2010