Three NYC Museums In One Day

Yesterday I managed to cram three museum visits into a single trip. The main purpose of this trip was to see the Solomon R. Guggenheim Museum so that is the first one I visited. I guess I’m becoming quite the New Yorker because on three occasions I had to give directions to other tourists. First a British man asked me if Metrocards are good for two days. I think they are good for a set number of trips. The Metrocard I bought does not expire until 5/31/2011 so I may use it on my next trip. I was also asked for directions to the Metropolitan Museum of Art and the Guggenheim Museum which was easy because they are both on Fifth Avenue. Also on this trip I never headed off in the wrong direction.

The Guggenheim Museum was running several special exhibitions; Haunted: Contemporary Photography/Video/Performance, Contemplating the Void: Interventions in the Guggenheim Museum, Malevich in Focus: 1912-1922, and Paris and the Avant-Garde: Modern Masters from the Guggenheim Collection. Most of the special exhibits were held in the annex levels so as I walked back down the spiral I had watch for the entrances to various exhibits. I can’t say that I cared much for the artwork shown on the rotunda as most of it was conceptual art based on a clever idea. I used to have more appreciation for the avant-garde but now I don’t consider a visual pun to qualify as great art. I did see some Cindy Sherman film stills, i.e. conceptual portraits. I like her photography because it uses the visual styles of the cinema which to a certain extent defines our contemporary aesthetics. Everyone loves movies so any artwork based on cinematography is sure to please.

Although the the photography, video, and performance exhibit was based around the concept of being haunted by the past, I did not find the selections to be particularly haunting. I definitely feel that artwork should be haunting. It should possess an eerie beauty or be uncanny in the Freudian sense. But nothing in this exhibit could compare to the photography of John Santerineross so I was not impressed. On the Rotuna Level 6 a film was being projected on various screens in such a way that you would walk in the path of the projector and cast a shadow.

“Contemplating the Void: Interventions in the Guggenheim Museum” was an exhibit of artwork based on the Guggenheim Museum’s rotunda and architecture. This was actually very interesting with several examples of how it could be redesigned or decorated. There were visions of tropical forests filling the space, digital matrices creating a futuristic look, the rotunda spiral stretching into infinity, extensions of the museum design into the New York City skyline, etc. You can view this online at: http://web.guggenheim.org/exhibitions/exhibition_pages/void/index.html

I liked the Thannhauser Collection and the Paris and the Avant-Garde: Modern Masters from the Guggenheim Collection exhibits which featured many famous paintings from modern art. I saw paintings by Marc Chagall, Pablo Picasso, Fernand Léger, Joan Miró, and Yves Tanguy. “Paris Though The Window “is one of the more famous paintings in the possession of the Solomon R. Guggenheim Museum. 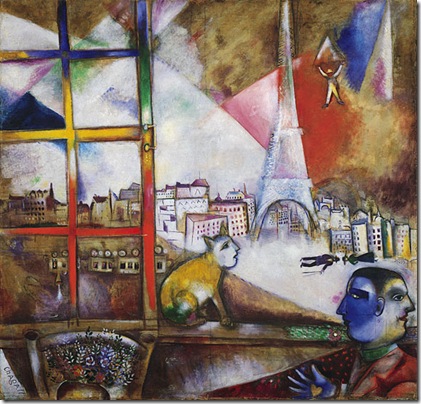 I was thrilled to see”Le Moulin de la Galette” by Picasso because it is used as the cover art on the Vintage edition of “The Sleepwalkers” trilogy by Hermann Broch which I bought at the Neue Galerie on my last NYC trip. I may never actually read that book with its 648 pages. 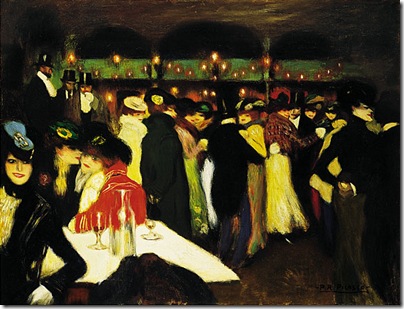 After I left the museum I went to the Guggenheim Museum Café which has a separate entrance on the right of the building. This café is notorious for its tiny servings at an outrageous price and I found this to be true. I sat at the bar and ordered the fromage dish which turned out to be three small pieces of cheese on a plate with a little sauce and three pieces of fruitcake bread. That cost $19.00 and left me still hungry.

I left the Guggenheim Museum around 1:00 PM so I had plenty of time to kill. I went to the Neue Galerie because they were having a special Otto Dix exhibition. He is one of my favorite artists. I’ve owned an art book on Otto Dix for a long time and I have a print of his “Portrait of the Journalist Sylvia von Harden” hanging on the wall of my home office. I did not take many photos on this trip but I did take a photo of the Otto Dix banner hanging outside the Neue Galerie: 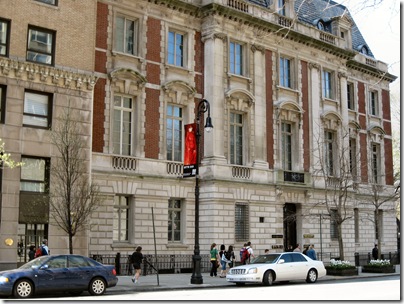 At the Neue Galerie I had to leave my jacket and Guggenheim bag at the coat check. I used the coat check services at all three museums I visited because it was too hot for my jacket and they don’t allow bags. The Neue Galerie had many drawings by Otto Dix in their dark room where you could hardly see anything. In German, that would be called “Das dunkle Zimmer” and a Google search reveals there is a novel by that title. The paintings were upstairs and included some of his most famous works like the “Portrait of the Dancer Anita Berberâ”. This is the painting of the woman in a red dress used on the banner and the cover of the art book I own. The Nazis certainly weren’t fond of Otto Dix because his paintings show the brutal horrors of war and the corruption of society as exemplified by leering whores and their clients in cafés. I saw a few drawings and paintings I’d never seen before, like a drawing of human intestines which was quite gross.

At the Neue Galerie bookstore I bought some novels by Stefan Zweig in German because I’m studying the language and need some German reading material. I also bought the novel “Berlin Alexanderplatz” by Alfred Döblin. I’ll probably read this novel because it is one of the most famous novels about Berlin but it was written before World War II which destroyed most of the city. They had a huge book with photography of Berlin that would have been a better buy but I did not want to lug a heavy book around.

The Neue Galerie is a small museum so I still had a lot of time left before my bus left. My next stop was the Crawford Doyle Booksellers bookstore which is on Madison Avenue. This bookstore is only open from Noon to 5 PM on Saturday. They are famous for catering to the patrons of the nearby museums although many tourists probably don’t know they exist. Inside I found a wide selection of literary books. I saw many novels I wanted and it was hard to make a selection but eventually I settled on “The New Yorkers” by Cathleen Schine. I really did not know what the novel was about when I bought it. According to the back cover blurb, “On a quiet little block near Central Park, five lonely New Yorkers find one another, compelled to meet by their canine companions”  That explains the photo of a dog on the cover.

It was still only 2:00 PM and my bus would not leave until 8:00 PM so I had six hours left. I decided to go to the nearby Metropolitan Museum of Art because you can certainly spend many hours in that huge museum. I have been to this museum once before, several years ago, and planned to devote a day to it on my next trip. I but since I saw so much of it on this trip I’ll probably go to the American Museum of Natural History for my next New York City daycation.

From the Great Hall I made a right turn to enter the Egyptian Art gallery. I especially wanted to see the Egyptian Art because it has been given a lot of mystical significance by the New Age community. I thought I would see if it would make any kind of an impression upon me. In a museum setting, most Egyptian relics don’t stir the imagination but some of the immense sculptures of temple gods could not fail to inspire a certain awe. One impressive exhibit featured models of  Egyptian ships found in a tomb. At first I thought these were museum models of ships but a large photo of the models lying in the tomb showed me that they were created by the ancient Egyptians. Eventually I found the famous Temple of Dendur in the Sackler Wing. This temple is shown in many of the NYC guide books I’ve read so I was eager to see it. 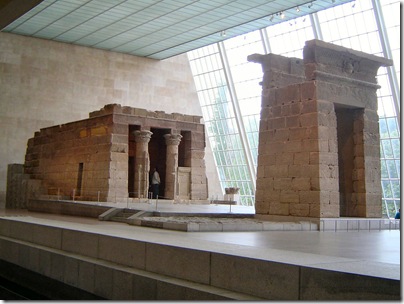 You can walk around the temple and even go inside. On the right of the temple there is a peculiar open box contraption which might be an elevator for reaching the top stones of the temple (for preservation work I imagine). An actual Egyptian temple is quite impressive but it seemed lifeless in this huge gallery. I think it would be far more mysterious and evocative to find such a structure half buried in the desert where it would really seem ancient and forgotten.

Nearby I discovered the American Wing Courtyard where I found many fabulous sculptures. Then I wandered around countless galleries of European paintings without knowing where I was. Eventually I found an information booth with a Museum Plan so I could find something more interesting. I went to the Greek Sculpture Garden because I have many books on ancient Greece. One of the more interesting pieces was the Eleusinian Mysteries relief. I’ve read several books on the Eleusinian Mysteries so I was familiar with this relief. There is a photo of it in “Eleusis: Archetypal Image of Mother and Daughter” by Carl Kerenyi.

I’m not sure why the Metropolitan Museum of Art has this marble relief, since both the book and Wikipedia claim it resides in the National Archaeological Museum of Athens. Maybe it is just a copy?

I also visited the Modern Art gallery because I’m more familiar with modern art than Medieval Art. Some of the artwork I recognized there include: “Portrait of a German Officer” Marsden Hartley, “The Figure 5 in Gold” Charles Demuth, “Ariadne” Giorgio de Chirico, “The Accommodations of Desire” Salvador Dalí­, “Potato” Joan Miró, “Beginning” Max Beckmann, “Self-Portrait” William Orpen, and “Tables for Ladies” Edward Hopper.

But I was especially thrilled to see two works by Gustav Klimt; “Mäda Primavesi” and “Serena Pulitzer Lederer” I bet the Neue Galerie would love to have those for its collection! I also saw two famous Symbolist paintings which I included in my French language notes: “Oedipus and the Sphinx” Gustave Moreau and “Isle Of The Dead” Arnold Böcklin.

Being on my feet all day really wore me out and made my legs sore but I accomplished a lot that day and met my goals for exploring New York City. I think my next trip will be to the American Museum of Natural History and then I plan to explore Greenwich Village. I’m pretty much done with midtown and the museum mile.

This entry was posted in Travel and tagged Guggenheim Museum, Metropolitan Museum of Art, Neue Galerie. Bookmark the permalink.

One Response to Three NYC Museums In One Day