Sorff is a Java application that you can download at http://www.sorff.com/. It is a social networking application for commenting on web sites that you and your friends like to visit. You could think of it as extending a comment system to the entire Internet. Sorff was created by the vlogger Paul Robinette (aka Renetto) who started the Vloggerheads Ning site for vloggers with Tom Guarriello (aka tlg847).

Social Surfing is a good idea that serves a definite need. The Internet is becoming an increasingly social phenomenon. Social news and social bookmarking sites like reddit and Digg are so popular that even Microsoft is planning to invest heavily into social sharing with something called SocialPC. However, one of the more annoying aspects of sharing your surfing finds with your friends is the need to paste a link into some online form. There are toolbars and buttons for sharing videos and content on various social networking sites but Sorff eliminates the need to paste a link. All you need to do is visit a site to be able to comment on it and see the comments left by your friends relating to that web site.

I’ve become quite addicted to the social news site reddit. However it is not the articles and other content that keeps me coming back to the site. It is the comments that I enjoy the most. Redditors frequently make snarky comments and exchange wisecracks in lengthy discussion threads. It is the greatest display of wit on the Internet. So comments can add a lot of value to online content. Often the comments underneath a news story on a blog will be more amusing than the news itself. So Sorff may really take off as the Internet’s most convenient comment system. It also allows for “stealth commenting“ in which you and your friends comment on something without leaving any trace on the site. 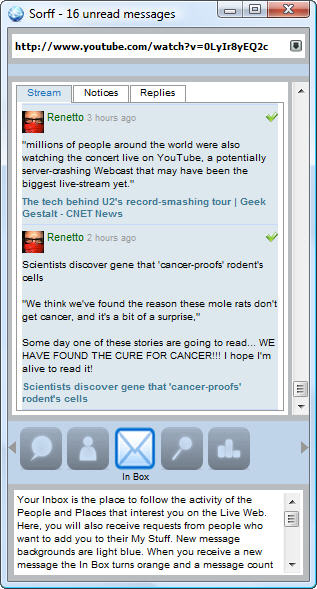 Sorff does not appear to be vulnerable to spammers because none of its activity will be indexed by the search engines. I’m not sure how it will generate any income unless they run ads within the application.

One Response to Sorff – Social Surfing