Today I went to Wegmans and bought some French cheese; Valmont Bleu V’Auvergne, Chimay a la Biere, and Fourme D’Ambert. I also bought a roast beef baguette. It would not normally occur to me to buy gourmet cheeses but I watched a French movie last night and they had a fine cheese with their meal. One of the arguments for foreign travel is to explore new possibilities. Sometimes when I get really bored and listless I try to think of some simple thing that I could do to break up the monotony. I’m fond of the notion that there are many little adventures you could have if only you could think of something to do that you would not normally consider. Buying moldy cheese is certainly out of the ordinary for me!

The movie that inspired my purchase of fromage was Six In Paris, a collection of six short films set in various neighborhoods in Paris. This is an old movie from 1965 so  it won’t be that helpful in giving you a sense of modern Paris. I especially liked Jean Rouch’s “Gare du Nord” in which a young housewife complains about her dreary life and expresses a desire for travel and mystery. While walking to work a man invites her to run away with him. He is the personification of her dreams and offers her everything she talked about earlier. But she refuses him and says it is impossible so he jumps to his death onto some train tracks because he was weary of life and she struck him as being his last hope.

The moral of this film is perhaps a little unfair. After all, a young woman can’t just take off with a stranger to the airport for an unknown destination without getting into unpleasant circumstances. But it did resonate with me because it was a perfect expression of the little death you experience when you deny even the possibility of doing something unlike you and say no to what life has to offer. 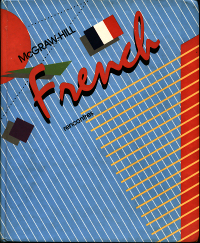 I’m currently reading this high school textbook to learn a little French before my vacation. This textbook was published in 1985 so it is probably similar to the textbook we used when I took French in high school, although I don’t remember exactly what that book looked like. I originally just bought this book for the nostalgia. It has lots of photos of French high school kids in the 1980s so there are photos of Star Wars (Guerres des étoiles) and old video game consoles like Atari, the original Personal Computer, Le Concorde, etc. It might be interesting to buy a more recent French textbook which would cover the euro and the Internet. I have a small collection of French textbooks so I probably have a more recent publication but I prefer this book.

I’ve learned that the French really love graphic novels and comic books which they call bande dessinée. Even though Japanese Manga is quite popular in the United States, French bande dessinée seems to be completely unknown. I found this very intriguing. Maybe there is a business opportunity in introducing Americans to bande dessinée. You could make a fortune translating them and importing them.