This Saturday I finally made a trip to Reading PA. I have been meaning to explore this city for years, but put it off because it is a bit far to drive. Recently I have been doing research for a short vacation in Reading PA. I might spend a few days there like I did in Lancaster.  I decided to just make a sort of preliminary scouting mission by visiting Reading Public Museum on a day trip.

Driving to Reading PA takes almost three hours and requires following a complicated route. My GPS seemed to have its own ideas about the best route so I had to ignore it for most of the trip. The only serious mistake I made was taking the first exit for PA 901 I came across, which had me going west instead of east. On PA 901 I drove through Minersville which looks like it might be an interesting small town to explore. On Pa 183 I drove past the Bern Reformed United Church of Christ which looked like a distinctive landmark. In any event, I will need to study the towns and highways of Berks County because I had no idea where I was most of the time. 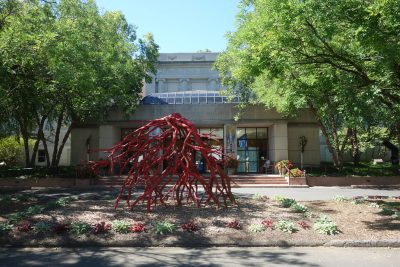 When I  reached Reading Public Museum I had a little trouble finding the parking lot. But I got there a few minutes before the museum opened. I took some photos of the entrance because I was unable to find a decent photo for my notes. I noticed a life sized statue of a painter who seemed to be doing some “en plein air” or outdoor painting of the museum. I have been unable to find any information on this statue. There was some other statues and art work near the building so I took some photos of them, but I did not wander far because the museum would soon be open. 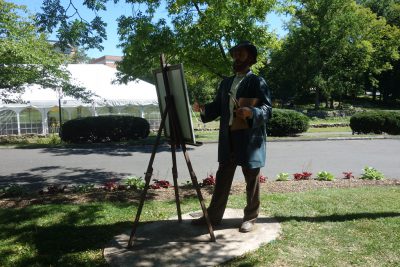 I paid $10 for admission. I had to use the restroom so I did that first. Then I saw an animatronic figure of the museum’s founder explain what he hoped his museum would accomplish but I did not pay any attention. I climbed the stairs to the first floor.

On the first floor I saw an exhibit of artwork by William Baziotes, a modern artist who lived in Reading PA. His work was in the modernist styles popular in the 1940s; Surrealism, Symbolism, Cubism, and Expressionism. I’m familiar with the major works in those styles but you don’t see much of the work by lesser known artists influenced by the greats.  Next I saw an exhibit on North American Indians and then Latin America. These are the some of the permanent galleries. The Animal Habitats galleries were a collection of taxidermy animals, part of the small natural history collection. 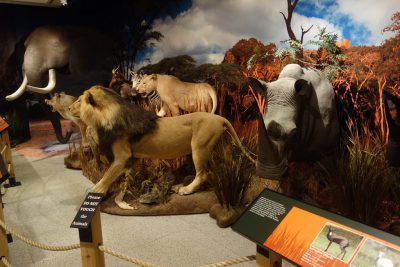 At the opposite wing of the first floor I found the Ancient Civilizations gallery. This was an impressive collection of Egyptian, Roman, and ancient Greek artifacts. They even had an Egyptian mummy,  Nefrina, from the Ptolemaic period. And they had Greek red-figure vase painting, large amphoras. As a reader of Ancient Greek tragedy, I always like to see artifacts from Ancient Greece. And Egyptian artifacts always make me think of the occult since it is so popular among occultist. The Pennsylvania German and Arms and Armor galleries did not interest me as much. 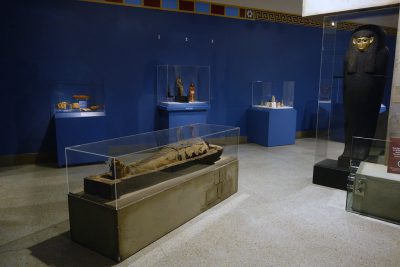 On the second floor, one wing had European and American art. The one piece I especially wanted to see was the statue Girl Drinking From a Shell by Edward Francis McCartan because John Updike describes this sculpture in The Centaur. I bought that book to prepare for my trip to Reading but I have not read it yet. However, I have read many of John Updike’s novels because I used to consider him the chronicler of middle-class life in Pennsylvania. The museum also had two rooms of modern and contemporary art. I know a lot more about modern art than classical art. 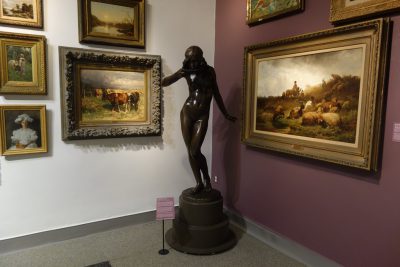 Girl Drinking From a Shell

The other wing of the second floor was taken up by the temporary exhibit, Real Bodies. I did not like this exhibit much because it featured a lot of real, perfectly preserved human bodies and anatomical specimens. I found it to be quite morbid and depressing. I did not take any photos of these body parts because that might be disrespectful or prohibited.

On the ground floor I saw the exhibit The Occult: Demons, Devils, and Witches which mostly consisted of small etchings and drawings under poor lighting conditions.  As usual in a museum you had to exit through the gift shop. I did buy a book “The Reading Public Museum and Art Gallery: Selections from the Permanent Collection” in case I ever want to learn more about the artwork I saw. I have to admit that this is unlikely. I rarely follow up on an art museum visit.

After leaving the museum I took a photo of the Neag Planetarium. Then I explored the park. I’m not sure what this park is called. Google Maps shows it as the Wyomissing Park System but it is also referred to as the Reading Public Museum’s Aboretum. In any event, there were sculptures and statues throughout the grounds of the park which would be highly unusual for a city park. It was a lush and beautiful park. It seemed to be very popular since there were a lot of people about, more than you would find in a state park or a city park. 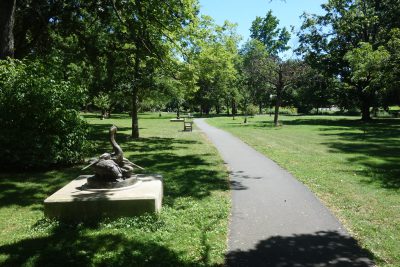 After leaving the museum parking lot my next goal was to photograph some establishments along Penn Avenue in West Reading. I had not finished my research of this major commercial area but I was finding it hard to find any photos online so I figured I would scout out the area myself. I only had to drive a few blocks north to reach Penn Avenue. My goal was to park at the Parking Lot A of the West Reading Center plaza but I round up driving around the Delaney Circle looking for a place to park. By luck I came across the back entrance to Parking Lot A. All the signs indicated that this was parking for customers of the shopping plaza only so just to be safe I went into the nearby Rite Aid and bought a DVD, Star Trek Enterprise: Season One. I like science fiction but I had never seen any episodes of this show.

To my dismay I found some sort of event was taking place and the street was really crowded. This proved to be the West Reading French Fry Fest. I don’t think this was a major event. Maybe Penn Avenue is always that crowded. The police only had one street blocked off for the food vendors. I tried to walk along Penn Avenue taking photos of establishments as best I could. Since I had not completed my research I was not sure what I would find. I did have lunch at Taste of Crepes. I ordered a Bacon crepe and a root beer float. I saw a Latino family in this restaurant which were the only Latinos I saw on this trip. 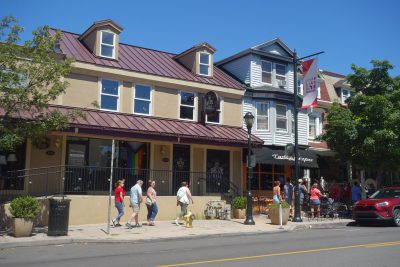 After wandering around a bit more I  finally found the record store, Vertigo Music, where I bought a 45 of Joan Jett’s single Crimson and Clover. I took a chance on a strange LP, Jeff Waynes Musical Version of the War of the Worlds. I thought it was worth a laugh and it was only $6.00. Fortunately it proved to be narrated by Richard Burton so it was something I can appreciate. I popped into Symbiote Collectibles which sells comic books and pop culture collectibles but I did not see anything I wanted. 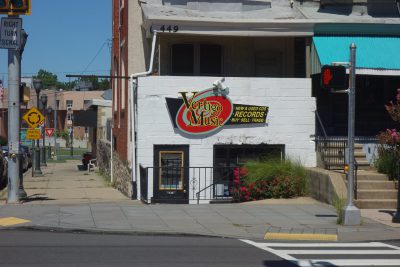 I might have stayed longer to explore Penn Street more thoroughly but I think the root beer float gave me diarrhea because I began to feel an urgent need to find a restroom. Something about walking around in hot weather and having ice cream seems to do that to me. I did not know where to find a public restroom so I decided to proceed to my final destination, Barnes & Noble, which has a restroom.

Unfortunately, I took the wrong exit leaving West Reading and wound up over in downtown Reading. I think I drove over the Bingaman Street Bridge at one point. Eventually I stopped in at the McDonalds on Lancaster Avenue to use their restroom. After that I finally managed to get onto 422 heading in the right direction. I drove to my final destination, the Barnes & Noble book store at the Broadcasting Square Shopping Center. I wanted to visit this book store because I suspected they would have plenty of books in Spanish and I was right. They had three book cases full of books in español just like the Lancaster Barnes & Noble book store did. I bought three books; Illustrated Spanish-English Student Dictionary, El gran Gatsby by Francis Scott Fitzgerald and Fahrenheit 451 by Ray Bradbury. It took me a long time to decide on these books but eventually I had to settle on the classics which I knew. 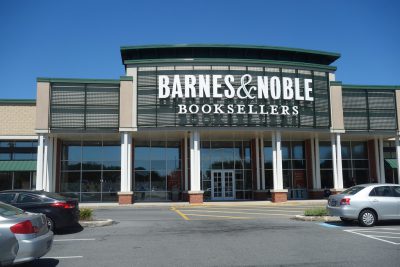 I was finally ready to drive home. I tried to follow my GPS device but I got lost and drove far out of my way. Eventually my GPS device had me going north on Route 61. This took me though some unfamiliar towns like Frackville and Ashland and Pottsville. It was not until I got on North 42 that I encountered any familiar towns. I reached Catawissa and then Buckhorn to finally find US 80 West near Bloomsburg. After that I was home free.

Before going home I stopped at the Lycoming Mall where I spent a lot of time looking for a good book. I eventually settled for a new edition of Snow Crash by Neal Stephenson even though I have already read this novel. I also bought three DVDs; Fun With Dick and Jane, Velvet Goldmine, and RV starring Robin Williams because I’ve been watching lots of YouTube videos on van life.

Overall, this was a successful mission. However, I do need to study the highways and towns in the Reading area in order to avoid getting lost on future trips.