2022 Central Pennsylvania Festival of the Arts

I debated with myself over whether to write a blog post about this trip, but I’ve decided it is worth while to document changes in attending the festival. I also want a record of the artists who caught my attention.

Yesterday I attended the Central Pennsylvania Festival of the Arts which has not been held for two years due to the pandemic. The festival is mostly held outdoors. I was only exposed to other people on the shuttle bus and in a restaurant.

This year they encouraged visitors to park at Penn State’s West Parking Deck on White Course Drive near the IST Building. This is a large parking garage behind the Westgate Building (formerly known as the Information Sciences and Technology Building) on North Atherton Street. There was a lot of construction going on behind the Westgate Building. I took the shuttle bus to get downtown. The shuttle bus was not a city bus. It was a blue Penn State bus which drove through the Penn State campus to reach downtown. Later on I discovered that you can walk through the Westgate Building and use its overpass to cross North Atherton Street to reach the West Parking Deck.

The first thing I did upon being left off downtown was use the restroom at the Schlow Centre Region Library and pick up an official program guide. I then checked out the nearby BookFest but there was nothing interesting there except for a lot of children’s books. I had a list of three artists I wanted to check out so I found their booths and bought a print from each of them.

The first artist I sought out was Bryan Yung. I like his watercolors of Chinese houses. I bought a print for $55 in cash. I had bought one of his prints during a previous arts festival. 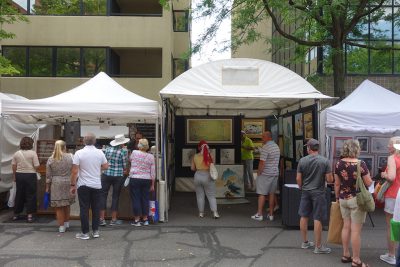 The second artist I sought out was Z. L. Feng. His watercolors are similar to Bryan Yung’s but he tends to paint trees with bare branches and bright blotches for leaves. I think I paid $30 for one of his prints.  I had bought one of his prints during a previous arts festival. 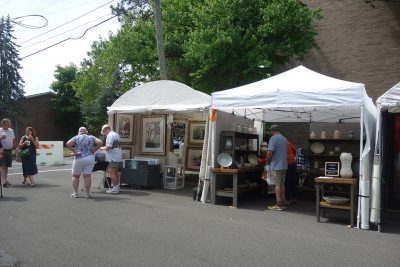 The third artist I sought out was Ellie Moniz. Her watercolors are almost like photos and her themes are Philadelphia. I bought her print of Chinatown, 10th and Arch for $20.00. 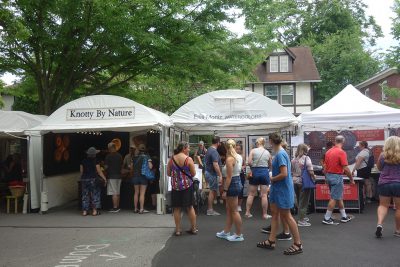 I had lunch at Cozy Thai Bistro because I noticed it was open but not too busy. I ordered the Pad Thai with chicken, soup, and a bottle of Pepsi. They did not have waiters until later so I got an order number on a table flag. They brought out my food in a plastic bag even though I was eating in. I was unable to finish all of the Pad Thai. 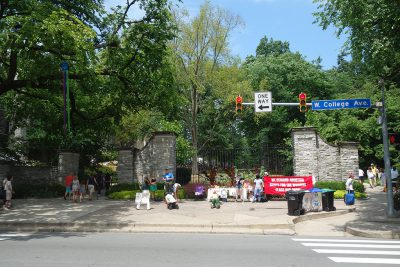 When I got back downtown I headed for Webster’s Bookstore Cafe whee I bought three books. I hunted all over for their foreign langauges book shelves and eventually found a shelf full of French books. I had to look around the corner at the other side of the book shelf for the Spanish books. The word “Teatro” leaped out at me and I bought the book “Teatro II: O destino morreu de repente” by Alves Redol. Unfortunately this book proved to be in Portuguese. I also bought the plays “Serious Money” by Caryl Churchill and “Life X 3” by Yasmina Reza. I don’t think I needed the “Serious Money” play but this was a student edition. I still have not read this play.

After that I dutifully checked out all the artist booths in the town and on the campus. I think I managed to see them all. I was almost out of money so I collected business cards instead of buying any more prints. I got the following business cards; Eli Helman, Kristin Z. Moger, Ashley Suader Miller. William Lewis, J. Bird Cremeans, Robert C. Flowers Jr, Joe Martino and Kyle A. Wilson.

As I mentioned, after checking out the booths on Burrowes Road I noticed that I was close to the Information Sciences and Technology Building so I might as well walk to the parking garage instead of walking all the way back downtown and waiting for the shuttle bus. I discovered that you can walk up the ramp of the Westgate Building and cross North Atherton Street using its overhead walkway. Other the other side of the building I had to walk past a construction site to reach the West Parking Deck. There seemed to be a lot of construction going on in State College. I noticed an immense block of buildings being built as I drove into the city.

This art festival was very inspiring. I’m still doing creative coding using Processing but I have become less active at it. I did order a book on forms because I think I can create some of the forms in Processing. I am also reading the book “Coding Art”.

On the way home I stopped at the Mexican restaurant Rey Azteca in Mill Hall. I ordered three tacos which came in soft shells stuffed with beef. I did not like these very much.