Having spent two days in downtown Lancaster my plan for the third day of my vacation was to drive to Lititz. This made me a little anxious because I had to leave the parking garage and find my way north. Fortunately I did this without making any mistakes. Exiting the parking garage was a delicate process of driving clear up to the top deck and following the exit signs back down to the ground deck where the exit is located off Chestnut Street. I used my parking ticket to open the gate.

My GPS device guided me through the one way streets until I got to PA-501 at which point it was a straight shoot north to go to Lititz. Along the way I passed the Lancaster Airport which just looked like a huge field. Unfortunately this day was even drearier than the day before which prevented me from getting any good photos. Also my right foot was really hurting me by this time so I was feeling slightly miserable.

I parked at Lititz Springs Park which is very convenient if you get there early enough. I did see it fill up later on in the day. The Lititz Springs Park is a pleasant little park although it was a very wet and muggy day. I saw lots of ducks swimming in the small canal. The first thing I photographed was the Lititz Wall of Remembrance and then the William B. Oehme Gazebo. I then crossed North Broad Street and walked north to find the Toy Soldier Restaurant & Pub. I noticed a Mexican restaurant Chilangos Authentic Mexican Restaurante which I took as further evidence that Latinos were making inroads into Lancaster County. I think there are very few Latinos in Williamsport.

After locating and walking the length of East Main Street I eventually had breakfast at the Cafe Arabella because it was open. I had a blueberry bagel and a large Cafe au Lait. I sat outside the Zest! store and kept on eye on Aaron’s Books across the street which opens at 10:00 a.m. As soon as it was open I went there and bought two books: “Rabbits” by Terry Miles and “Show & Tell: Writers on Writing” published by the University of North Carolina Wilmington. I went back to the car to place this purchase in the back seat. 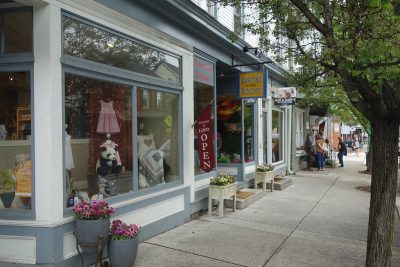 After this I must have gone to the Wilbur Chocolate Retail Store since my receipt shows the time 10:33 a.m. I bought some chocolate covered marshmallows, some chocolates with sea salt, and a bag of chocolate drops. I went back to the car to place this purchase in the back seat.

Next I went to the Julius Sturgis Pretzel Bakery where I bought Spicy Honey Mustard for dipping pretzels, a bag of Horse and Buggy pretzels, and a teddy bear with a “Pretzel Lover” scarf. All this only came to $21.23 which was quite reasonable. I did not do the tour because you have to make a reservation online. My receipt shows that I was there at 11:04 a.m. I went back to the car to place this purchase in the back seat. 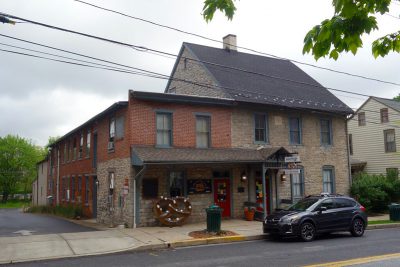 After that I went to Purple Robin Reserve were I bought a giclée print by artist Margaret Thorn Mack & Manco, Ocean City, NJ 2009. This was a bit expensive at $45.00 but I thought it was a great piece of art work to buy on vacation because it really captured the vacation spirit, although I have never been to Ocean City NJ. This of course had to be taken back to the car which was painful with my bad foot. According to my receipt I made this purchase at 11:52 p.m.

I’m pretty sure I had lunch at Chilangos Authentic Mexican Restaurante around noon. I had been keeping my eye on this place to see when it would open. It did not appear to be open until after 12:00 p.m. I was shown to a table on the second floor. I ordered the Enchiladas Rojas o Verdes, 4 chicken enchiladas with green or red sauce, served with lettuce, cheese and sour cream. I had the green sauce. I think it came to $15.09 so I paid that exact amount in cash but left two dollars on the table as a tip. I probably should have eaten at the more iconic Bulls Head Public House but since I was studying Spanish I was more interested in Mexican cuisine. The best thing about Mexican food is the sour cream. 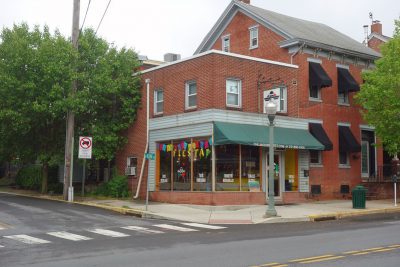 After lunch I went to Isabella’s Ice Cream Parlor for desert. I got an ice cream cone with two or three scoops of ice cream which was really too much. I ate it in a hurry because the ice cream was melting. I was pretty much done with Lititz at this point but before I left I walked down South Broad Street and found the Lititz Music Co. store where I bought two CDs; Best of the Eurythmics and the Evita soundtrack. 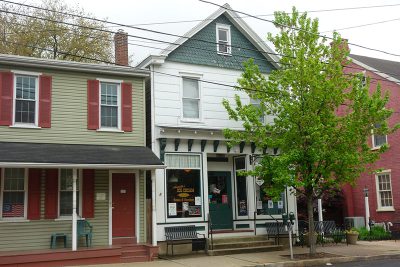 Instead of driving directly back to the hotel I decided to visit the Barnes and Noble bookstore in the Red Rose Commons shopping mall. I entered the address 1700 Fruitville Pike into my GPS device. I stopped at a Sheetz on Lititz Pike to fill up my gas tank at 1:45 p.m. I managed to drive to the book store without making any driving mistakes. I’m glad I made this detour because I discovered that this store has two entire book cases of books in Spanish. I bought three books in Spanish; Ficciones by Jorge Luis Borges, James Y El Melocoton Gigante by Roald Dahl, and El Laberinto Del Fauno by Guillermo Del Toro, Cornelia Funke. Only the Roald Dahl book is something I could read given my limited vocabulary and even then I would need to Google Translate every page. 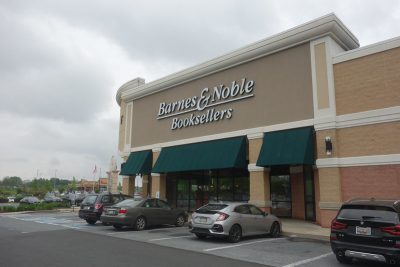 Once back at my hotel I spent some time relaxing before heading out for some final activities. First I went to the CVS Pharmacy to make an ATM withdrawal since I had spent a lot of cash in Lititz. I found a Star Wars Solo Blu-ray which I decided to buy since I saw that film on my trip to Boston. My receipt shows that I was there at 4:04 p.m. Next I went to Zoetropolis which I finally found open. I had some deviled eggs with fish roe, an unusual twist on this classic Pennsylvania Dutch dish. Finally I went to Madcap and Company on North Queen Street where I bought a Edgar Allen Poe bookmark.

That was the end of my Lancaster vacation. I had planned to stick around the city on Sunday after checking out of my hotel but my feet were killing me and I did not feel like it. I got up very early and left as soon as possible. I did have some problems with my parking garage ticket. I had to go back to the lobby to get a hotel guest entry/exit ticket so I could get the gate to lift. My GPS device guided me perfectly on the drive home. I stopped at Burger King in Lewisburg for breakfast at 8:00 a.m. and used their restroom. On the log drive home I listened to my Spanish music CDs.

I think my trip went almost perfectly but I was still a bit depressed by the bad weather and my slight injuries. The only real problems were being given two sandwiches, the problem with my hotel key card, and the parking ticket not being accepted when I left. What went well was I drove everywhere without making a single driving mistake. Making a side trip to Lititz is something to be proud of since I don’t usually use my car to get around once I arrive at a city. I had planned this trip way back in 2019 before the pandemic so it was great to finally put these plans into effect.