My objective on the second day of my vacation was to take some photos of establishments and landmarks which I forgot on the first day and to visit some museums and other establishments. Unfortunately it was a very cloudy and dreary day so the light was not good for taking photos.

While I was in the Penn Square area, I located several places I had forgotten to photograph including; the Tellus360 Irish Pub, Pubforge, the Lancaster County Convention Center, the Southern Market Lancaster brick building, Fig Industries, La Cocina Restaurant, and the Demuth Musuem. 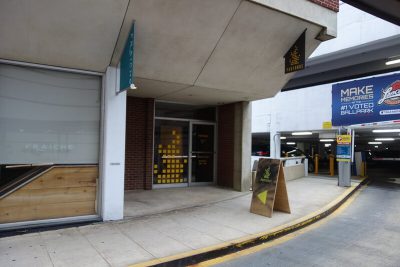 After that I walked all the way to the Lancaster Cemetery via Duke Street. Walking though the wet grass got my shoes wet and probably caused the large blister I finally got on my right foot. But I did find the grave of Augusta Bitner. This grave features a life sized statue of the Virgin Mary which is said to be haunted. Finding the grave was a little difficult until I noticed the buildings in the background of the photo in my notes. I was then able to look around and saw the houses which must form the backdrop to her grave, one of which had a pointed tower. 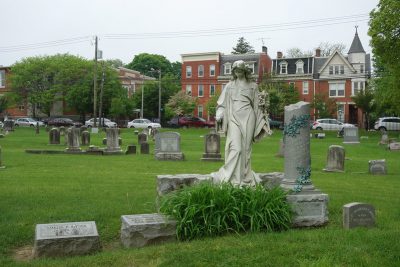 Leaving the cemetery I walked west and it started to rain although just some light showers. I immediately headed back to the hotel to get my umbrella. Once I had my umbrella my objective was to take photos of the places on my list. One of these establishments was Maison restaurant on North Prince Street but this restaurant proved to be permanently closed. Still I took some photos of where it used to be. Next I located Flora’s on North Mulberry Street. This restaurant specializes in Latin American fusion cuisine. Unfortunately this restaurant was closed because the owner’s were on vacation. Nearby was Rachel’s Café & Creperie so I stopped in there for breakfast. I ordered the Rodeo crepe, a glass of orange juice and a coffee. The Rodeo crepe was filled with bacon and eggs and made for a large breakfast. The glass of orange juice was large and the cup of coffee did not come with any milk or cream. Rachel’s Café & Creperie was in a different location on my previous trip to Lancaster in 2010. It was great to finally give this place a try. 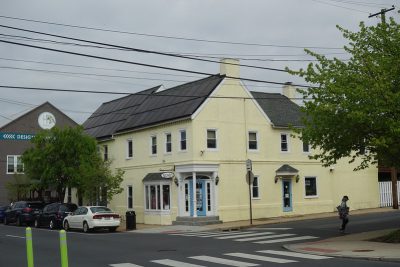 After breakfast I found the Shreiner-Concord Cemetery nearby where Thaddeus Stevens’ tomb is located. This small cemetery is surrounded by residential houses so was kind of like a small park. This cemetery is located behind the Fulton Elementary School on West Orange Street. 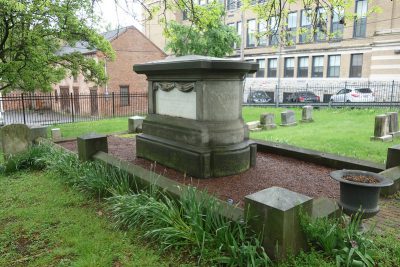 Next I think I visited the Lancaster Museum of Art at around 10:00 a.m. I must have gone along East Orange Street because I took a photo of the YWCA on the way. At the Lancaster Museum of Art I saw the exhibit of work by Mark Wagner “Art Made From Money”. Lancaster-based artist Mark Wagner shares his thought-provoking and satirical artwork made entirely from deconstructed U.S. dollars to explore the intersection of wealth, power, value, and American identity. This special exhibition features over 50 meticulously constructed pieces and takes a special look into the artist’s creative process. This artist must have been made of money because his art work sure was! All of his art work is made from real money as destroying money is not illegal. I was tempted to buy a catalog but it was $15.00 for just a thin booklet. I’m not made of money! I had trouble getting the door open to leave but the lady in the museum managed to get it open for me. 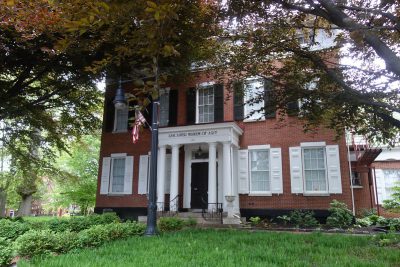 After leaving the Lancaster Museum of Art I think I went to its sister museum the Demuth Museum. I had visited this museum on my first trip to Lancaster but that was over ten years ago so things would have changed. Instead of going through the arch to the garden in the back to enter the museum you can now enter through the front door. I watched a short film about Charles Demuth’s life and artistic impact. Then I viewed the art work downstairs before climbing the steep set of stairs to the second floor which only had a few display cases of artifacts like the artist’s hat. The final exhibit room was dark but the lights came on when I entered. The exhibition I saw was called “Between Two Worlds” and featured the paintings of artist Helen Berggruen. The second floor art work seemed to be a response to Helen Berggruen’s work by Elizabethtown College Faculty. Only Jeff Bye’s wide painting of the interior of the Parkway Theater in Baltimore MD was interesting. 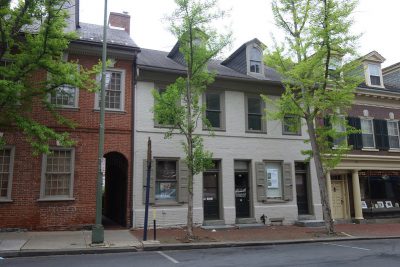 I don’t remember the exact sequence of events but I did go to Read Rose Books where I bought the hard cover novel “Whitethorn Woods” by Maeve Binchy. I did not particularly want this book but I felt obligated to buy something. I am familiar with this popular Irish novelist from my research for my trip to Dublin. I also went to Winding Way Books which was not exactly where I thought it would be. You enter the front door next to Mr. Suit Records and then climb a steep set of stairs to the second floor to find Winding Way Books down a hall way. I bought two books I found in the Theater section; “In the Boom Boom Room” by David Rabe, “From Option To Open” by Donald Farber. After that I went into a few of the art galleries on the nearby Gallery Row and bought a card at the Freiman Stoltzfus Gallery.

I do know the exact time I went to the CVS Pharmacy on West Lemon Street to use the ATM. It was 1:55 p.m. I also bought some things I thought I would need; Compeed Blister cushions, a travel size of Dove Shampoo for Men, a Dove Moist Bar of soap, and Tylenol Arthritis capsules.

For dinner I made an online reservation at Citronnelle, a fancy and expensive French restaurant on West Orange Street. This restaurant was not even in my notes but I saw it on Google Maps. I rested in my hotel room for over an hour before going to the restaurant because my feet were killing me. When I arrived right on time at the restaurant I found the door was locked. I was going to walk away but fortunately I noticed a door bell so I rang that and the waiter instantly opened the door. He knew exactly who I was going to be because I was the only diner at that early hour, 5:30 p.m. The restaurant seemed very fussy and everyone had to wear face masks except for the diners. They made me move even though the restaurant was empty. I ordered the Creamy Crab Croquettes, the Dark Chocolate Soufflé, and a cappuccino. I probably should have ordered a second course but I was not too hungry. While I waited for the crab croquettes I was given two small squares of heavily spiced bread to eat. The Creamy Crab Croquettes turned out to be very mushy and cold but I think they probably were meant to be like that. The Dark Chocolate Soufflé came with some crème brûlée to pour into the cake. The entire meal cost me $55.44 so it was as expensive as a New York City restaurant. I did not mind splurging on my first vacation in almost two years. 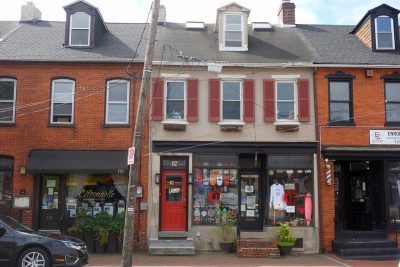 After dinner I walked to Penn Square before realizing I had forgotten my umbrella at Citronnelle. I had to walk back to fetch it. Then I walked back to Penn Square  and entered the Annie Bailey’s Irish Public House. I wanted to have a pint at Tellus360 but they seemed to be doing an event. Annie Bailey’s Irish Public House proved to be a traditional Irish pub and not the dive bar I was expected. I sat at the bar and had a Magners Irish Cider, a bottle of the Pear Cider. This is my favorite Irish drink although some Guinness would have been more appropriate. I’m not very familiar with bar etiquette so I just left a dollar tip plainly visible on the bar. I drank that bottle of cider within minutes and returned to my hotel room. 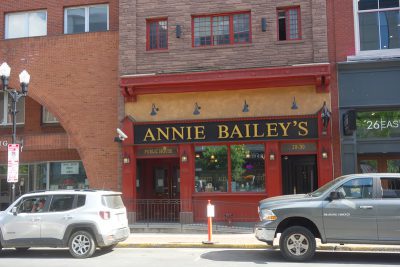 Although the miserable weather made this a bad day for taking photos, I had managed to visit two museums, two cemeteries, and ate at three establishments I wanted to check out.