Now that most pandemic restrictions have been lifted I can continue to visit Pennsylvania’s cities and towns instead of state parks. Until international travel resumes this will have to do. On Saturday, July 31, 2021 I decided to visit Bellefonte in Centre County. I have only been to Bellefonte once before in 2015, on July 18, 2015. Back then I was using a Fujifilm FinePix JX400 digital camera so my photos were not very good.

After reaching Bellefonte I parked in front of Talleyrand Park. However, I did not feel comfortable parking there because there was a two hour limit and I was uncertain about which parking meter pertained to my parking space. So later on I parked in a small parking lot on the south end of Talleyrand Park off South Water Street. At first I was going to park in the Subway parking lot because it was closed, but then I moved my car to be even safer. 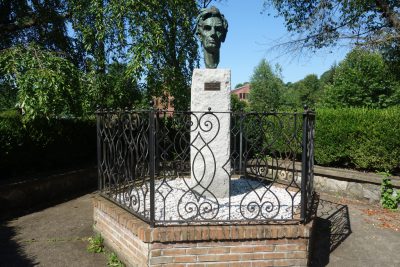 So my first step was to walk through the Talleyrand Park. I crossed a bridge over Spring Creek and found the George Grey Barnard Sculpture Garden with its Lincoln bust. There were a lot of ducks and geese in the park because people could buy feed to give to them. I found the Bellefonte Historical Railroad car which I might have missed on my previous trip because I have no photos of it from then. Or maybe it is new since 2015. After walking around the park I climbed High Street to the Centre County Courthouse. There were a few vegetable stands there as part of a small farmer’s market. I also saw many people creating chalk drawings on the sidewalks. Later on I came across a group of people judging the chalk drawings. I took lots of photos of the north side of High Street because the light was best on that side on the street. Eventually I turned left to go up North Allegheny Street. I took photos of the Bellefonte Art Museum, the Centre County Library, and various Victorian mansions or large houses until I found the Reynolds Mansion. Along the way I saw the Hastings Mansion at the corner of North Allegheny and Lamb Streets. This impressive building was owned by Governor Hastings in the 1890s. I then returned back downtown and walked back to Talleyrand Park to move my car. 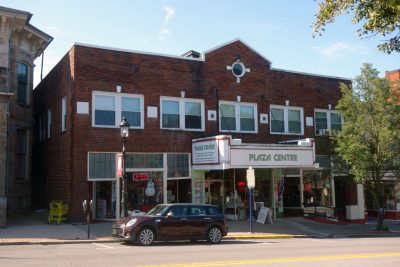 Once my car was safely parked I spent more time in Talleyrand Park. The Train Station Office of the Bellefonte Intervalley Area Chamber was open by then so I picked up a few brochures. I walked back through the park to put the brochures in my car. Then I headed for Plaza Centre Antiques. I bought three DVDs at this antique mall; The Love Guru, Appaloosa, and Basic Instinct.  DVDs are becoming antiques as you can’t find them anywhere except for Walmart, Target, or antique stores. I also bought a heavy textbook, History of the Theatre, sixth edition, ISBN: 9780205128686. It was in pretty good condition and a bargain at $5.00. The floors creaked loudly in this store and the merchandise was yard sale quality. I returned to my car with these purchases because the book made the bag quite heavy. 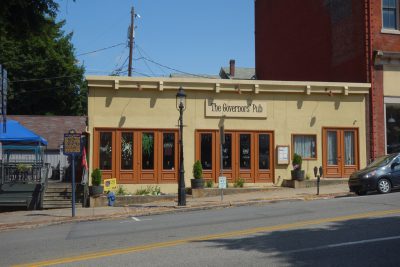 My next goal was to eat lunch. I had lunch at the Governors’ Pub just like on my previous trip to Bellefonte. In fact, I had printed my old itinerary and did the exact same things except for going to Penns Cave. I ordered the Fish and Chips at the Governors’ Pub with a root beer for the drink. Halfway through eating I used the restroom just to make sure I would not need to find a bathroom later. 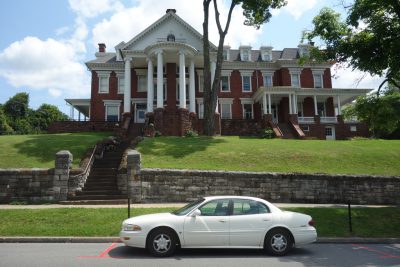 After lunch I walked back to the Centre County Courthouse which was now cleared of tents. I walked up North Allegheny Street again. I took photos of the post office and the Centre County Library. I entered the Bellefonte Art Museum but I found the exhibits so uninteresting that I did not leave any money as a tip. At this point the lowest bill I had was a ten dollar bill and I considered that a too generous tip for their crappy exhibits, most of which were children’s art work. I walked back to the Reynolds Mansion and then far west on West Linn Street to take photos of other Victorian mansions. Upon returning to North Allegheny Street, I walked uphill to as far as Curtain Street. And then after walking back down to Linn Street I walked east on East Linn Street as far as The Queen, a Victorian bed and breakfast. Lunch was beginning to ferment in my stomach so I did not feel like exploring too far. 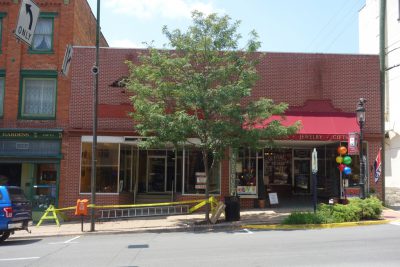 After returning to the center of town, which is the Centre County Courthouse square, I walked down South Allegheny Street to take photos of establishments along this street. I saw the Victorian House Antiques store which stuck out because of its eBay sign. This was the only establishment I entered. It proved to be a more upscale antiques store with some high quality items. For example, I saw a small bar of gold for $89 but it was only the size of a chicklet. I also saw a nice collection of rings which might contain some hidden gems. These items interested me because I have begun to buy some precious metals. I might also  buy some “material wealth” to build up a treasure chest. But I did not buy anything at the Victorian House Antiques store. Upon returning to the Centre County Courthouse square, I climbed up a steep hill to reach the Union Cemetery. The view from the Union Cemetery was spectacular but the grave sites were a little depressing. 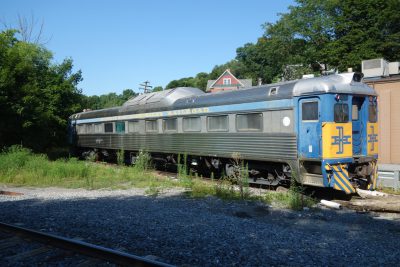 By this time, my bowels were cramping up so I walked all the way back down to Talleyrand Park. I went into the CSV store to buy a copy of the Centre Daily Times. This was on my old itinerary so I decided to do that on this trip too. I paid $1.50 for one of the thinnest newspapers I have ever seen. There were only 20 pages in two sections! Fortunately it occurred to me that the Train Station Office of the Bellefonte Intervalley Area Chamber might have a restroom like the Jim Thorpe trains station has a restroom for tourists. They did have a restroom even though it was extremely small. That brought me a lot of relief! 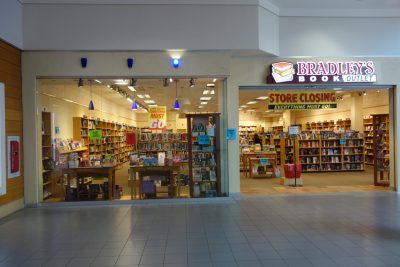 My final goal was to drive along Route 150 to the Nittany Mall. I wanted to shop at the Bradley’s Book Outlet and the Barnes & Noble book store. I managed to find my way to the Nittany Mall. I turned right onto Shiloh Road and then left onto East College Avenue to arrive at the entrance of the mall. This mall is really dying. I took several photos inside but most of the stores were gone. Bradley’s Book Outlet was still open but their sign said they were going out of business. I didn’t like their selection of books so I eventually had to settle for The Complete Idiot’s Guide To Screenwriting: Third Edition. This book came with a CD that includes sample screenplays. Although I am planning to write a screenplay I have not begun it yet. Maybe this book will inspire me to get started. 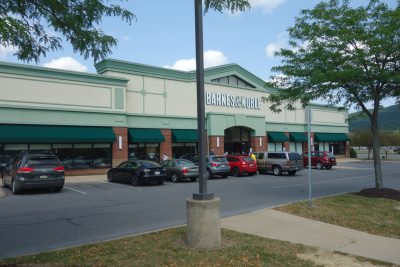 I then drove to the Barnes & Noble book store which is not attached to the Nittany Mall. I had to get back onto Route 150 to reach the Barnes & Noble book store. I went to the Science and Business sections where I really splurged. I bought five books for a total of $115. I bought: The Undoing Project by Michael Lewis, Possible Minds: 25 Ways of Looking at AI edited by John Brockman, The Age of Cryptocurrency by Paul Vigna and Michael J. Casey, T-Minus AI by Michael Kanaan, and Stock Investing for Dummies by Paul Mladjenovic. The reason I bought so many books is that I saw many books that I do not see at the Books-A-Million store in the Lycoming Mall.