I have not been blogging about my travels. Although I was forced to stop making trips during the pandemic, I did continue to visit state parks. I visited a record number of state parks last year including most of those within driving distance. But there is not much to say about a trip to a start park other than to mention the hiking trails I found.

Yesterday I made my first trip to Jim Thorpe PA since the pandemic. It has been two years since I’ve been to Jim Thorpe. Not much has changed there. They did change the parking situation. They are now using Flowbird parking meters. These parking meters require you to enter your license plate number, which is something I don’t have written down anywhere. I will need to create a card for my wallet with some information that I always need on me, like my employee number and license plate number. Parking for the day is now $12.00. I don’t know how they are enforcing the parking. I placed my ticket on my  dashboard but only after I had been in town for a few hours.

The first establishment I visited was Sellers Books. I spent quite some time searching for a good book and eventually settled on an Eyewitness Travel Guide for Dublin (ISBN:9870789441782) for which I paid $7.61. This was a great find because there aren’t many travel guides specifically for Dublin and I did not have this one. I’m still planning a trip to Dublin but I probably won’t go until 2022. Next I went to Soundcheck Records where I bought a Joan Jet & The Blackhearts Greatest Hits CD for $10.98. This was the only establishment that was still taking any COVID-19 precautions. I had to use their hand sanitizer because “everyone is touching things”. At the Mauch Chunk 5 & 10 I bought a memo book and some pens so I could write down my license plate number. The memo book will go in my travel bag in case I need to write something down in the future. 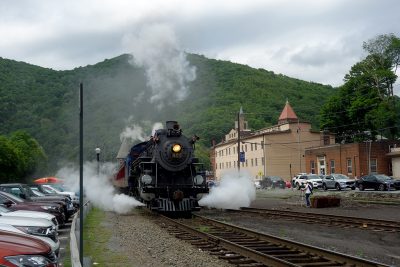 After using the restroom at the train station I dropped off my purchases at the car. It was a long walk to my car because the parking lot was full. I had to park near to the bridge to East Jim Thorpe. Then I purchased a ticket for the Lehigh Gorge Scenic Railway. I paid $17.00 for a seat on a standard coach. The train was pulled by a genuine steam engine. The ride lasted 70 minutes and stopped at Old Penn Haven before turning back. 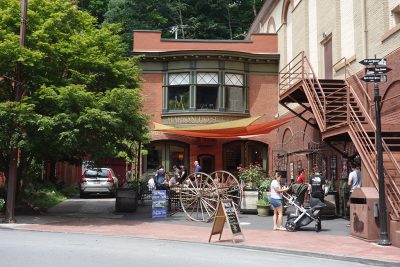 Once I got off the train I walked back to my car and placed my parking ticket on my dashboard. Then I went back into town to look for a place to eat. I was planning to eat at Tony Stella’s Encore with its Absinthe Bar but this was one of the few establishments that seems to be permanently closed. Instead I ate at the Marion Hose Bar on West Broadway. I sat at the bar and ordered a Big Dog with French fries and a lemon bubble soda which came in a bottle. Surprisingly, the best part of this meal was the ketchup. This ketchup was absolutely delicious. I ate all my fries and asked for more ketchup to do so. 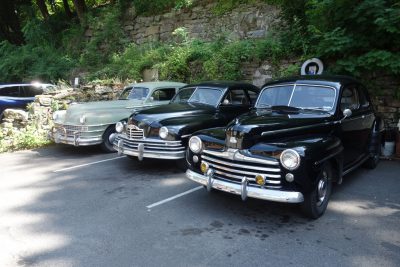 After eating I did a little more shopping before going home. I saw some antique cars on Race Street. I was going to look for some used books at Serendipity on Race Street but it looks like they have closed permanently. So that was the second casualty of the pandemic. I did enter the Douglas House Marketplace from its Race Street entrance. After heading downstairs I found the Bee Stung shop where I bought an Alice In Wonderland necklace with a key. It was elegant and whimsical notion. I also went though the Emporium of Curious Goods store but did not find anything I wanted to buy.

I stopped in at the Lycoming Mall before going home. I was worried that Books-A-Million might be closed since I got there after 5:00 p.m. but they seemed to have extended their hours. I bought 3 Blu-ray DVDs; Couples Retreat, Get Hard, and Hall Pass (all comedies). I also bought a hardcover science book Fossil Men: The Quest for the Oldest Skeleton and the Origins of Humankind by Kermit Pattison. I have been buying more and more science books because my study of artificial intelligence has exposed me to more hard science and the mathematics behind research.