By Friday, September 27, 2019, I had gone through everything on my itinerary so I had to plan a day from scratch. I decided to visit some more minor museums on the Upper East Side, but further north on Fifth Avenue. For breakfast I repeated my routine and ate at Pret a Manger where I had a cup of coffee, a parfait berry yogurt, a mozzarella and tomato croissant, and a small bottle of orange juice. I also went to Duane Reade again and withdrew another $80.00 at 8:33 a.m.

I walked to the 42nd Street Station where I took the S line shuttle to Grand Central. I transferred to the 6 line and went uptown to 103rd Street Station. This subway station is in Spanish Harlem. I walked west and had enter a tunnel through the Metro-North viaduct to reach 5th Avenue. The museums did not open until 10:00 a.m. and I got there at 9:22 a.m. so I had time to explore the northern end of Central Park. I saw the lovely Conservatory Garden with its Burnett Fountain and Untermyer Fountain. I walked around the Harlem Meer and saw the Huddlestone Arch. That part of Central Park was like being in the woods. It even had a waterfall, a creek, and a pond. New Yorkers might appreciate that bit of nature but it was nothing unusual to me.

I paid $20.o0 admission to the Museum of the City of New York at 10:23 a.m. I saw exhibits on activists, the labor movement, American Indians, and special exhibits entitled: the Voice of the Village, Pride Photographs of Stonewall and Beyond, Cycling in the City, New York at its Core, Timescapes film, and the Stettheimer Dollhouse. Overall the exhibits were heavily weighted towards the Left and would probably infuriate a conservative. I liked the Timescapes film and wasted about a half hour watching the entire thing. 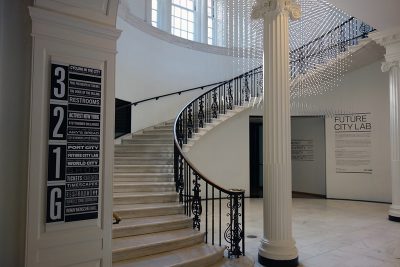 Museum of the City of New York

Next I went to El Museo del Barrio right next door. Admission to this museum was only $9.00. The front of the building was covered with scaffolding which made it difficult to determine if I had the right place. This museum was devoted to Latino art. There are few Latinos in Central Pennsylvania so I don’t have any prejudices against them. Most of the time I won’t even register that somebody is Latino. I wonder if that is even a legitimate race since many people in South America are of European descent. I’m a bit interested in  South American culture. Buenos Aires, Argentina’s cosmopolitan capital city, has caught my fancy because it is said to be the Paris of South America, heavily influenced by European culture. I have not really looked into the matter, but I think the Left perpetuates stereotypes about immigrants and conceals the cosmopolitan nature of South American culture. I’m sure Buenos Aires is a modern city with software companies and an extensive theater community that we know nothing about. The largest exhibit at El Museo del Barrio seemed to be just an extensive series of panels with photographs about the history of the museum, but there was some art work as well. Most of the art work was political in nature. 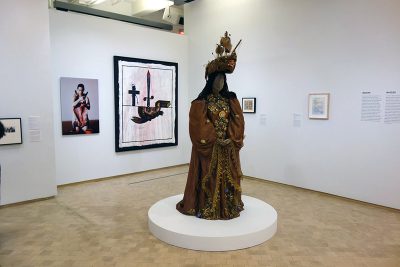 After seeing just those two museums on the Upper East Side I went back to my hotel and had lunch at Pret a Manger. I was probably going there too often and wasting the opportunity to try new restaurants, but I was tired of paying too much for a meal. I had a Ham & Cheese Baguette, a Sunshine Bowl (which I did not like), and can of coke. 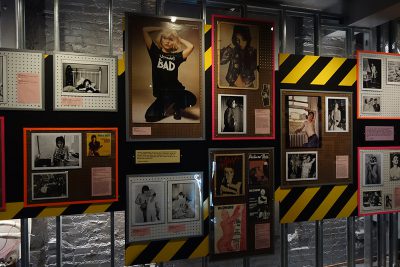 I walked to the Museum of Modern Art but it was closed until October. I had to make do with photographing a few pieces of public art in the area. So instead of seeing modern art I went to the Museum of Sex. This proved to be a good move because one of their special exhibits was on punk rock; Punk Lust: Raw Provocation 1971-1985. This was the second museum exhibit on punk rock I’ve seen in New York City and much of the material I saw was familiar to me from my own collection of punk rock memorabilia. It is sad when your youth becomes fodder for the history museums. But I wasn’t expecting this so I was glad I happened to visit the museum. Another exhibit was showing graphic vintage stag films which was a bit awkward to watch. I’ve joked that the Museum of Sex should add some interactive exhibits and was amused to find that they’ve actually done that! I saw a vibrating bull ride for the ladies and a glory hole game which probably used dildos. Needless to say I didn’t want to play! I also saw a 7 minute film on erotic carnivals which ended with a walk-in kaleidoscope that was pretty psychedelic. I left the Museum of Sex around 4:00 p.m. and returned to my hotel. When I got to Times Square I noticed that they had unveiled a new temporary bronze statue, Rumors of War by artist Kehinde Wiley. 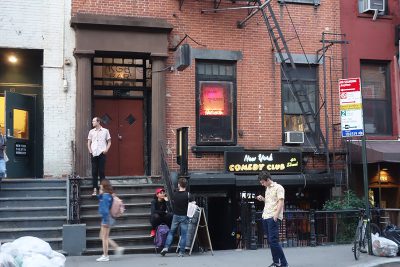 That evening I had planned to attend a literary event being held at an East Village bar I’ve been meaning to visit, KGB Bar. However, there was a mix up and I went to the wrong floor. Instead of the NYU Emerging Writers reading I saw a variety show “Roommates” in the Red Room. I probably should have gone back down to the other bar for the reading but there were no seats available there so I decided to see the variety show instead. There was a two drink minimum so I had a can of IPA (Indian Pale Ale) and a glass of chardonnay. The variety show featured some singing and comedy acts on the subject of apartment roommates. One of the comedians mentioned the old goth band Coil which caught my attention. I thought this was pretty interesting example of New York City nightlife even though it wasn’t what I set out to see. It was probably more interesting than the literary reading. I was slightly inebriated when I left the bar but I did take the time to take some great night shots of the East Village. Previously I had taken some photos in the evening which turned out well.