On the fourth day of my vacation in New York City, September 24, 2019, I began my practice of having breakfast at the Pret a Manger near my hotel. I liked eating there because it was affordable and convenient. You don’t have to wait for your sandwich to be made. You just grab whatever you want and then pay for it, cafeteria style. I got a cup of coffee, a yogurt, and a small bottle of orange juice. They just give you a cup for the coffee and you pour it yourself at the coffee station.

My goal for this day was to visit some minor museums on the Upper East Side. I walked to the 42nd Street Station and took the shuttle to Grand Central. Then I took the 6 train uptown to 96th Street Station. I didn’t have any photos of this station’s exits so I took a few photos myself. It is surprising how poorly documented some aspects of New York City are but I’m taking care of that. I followed my detailed trip directions to prevent getting lost on the Upper East Side. From the 96th Street Station I walked west along East 96th Street between Food Universe and Pure and Natural which took me past a church, St. Francis de Sales Roman Catholic Church. I turned left onto Madison Avenue between Jerome Florists and Starbucks. I walked past the red brick Madison Avenue Armory and saw its stone plaque with the squadron’s cry “Boutez en avant!”, “Press forward!”. I found the Corner Bookstore on the corner of Madison Avenue and East 93rd Street but it was closed. It would not open until 10:00 a.m. and I was there at 8:06 a.m. I did not return after visiting the museums because I had other book stores to visit and did not want to buy more books than I could fit in my luggage.

I followed my directions perfectly but arrived at Cooper-Hewitt by 8:10 a.m. so I went to Central Park to wait.  I saw a few memorial plaques there. I eventually got tired of waiting around and strolled down 5th Avenue to photograph the Guggenheim Museum, Neue Galerie, and the Metropolitan Museum of Art. I found the Group of Bears sculpture and took photos of that. I searched for Cleopatra’s Needle and eventually found it but I really need better directions to locate it. You would think you could see the obelisk rising above the trees but the trees are actually taller. Cleopatra’s Needle is between the King Jagiello Monument and the Alexander Hamilton Monument. I took some great photos of Belvedere Castle which is also in this section of Central Park. That killed enough time for me to return to the Cooper-Hewitt, National Design Museum shortly before it opened. The entrance is on East 91st Street and I found a group of people waiting for it to open. A guard unlocked the front door. 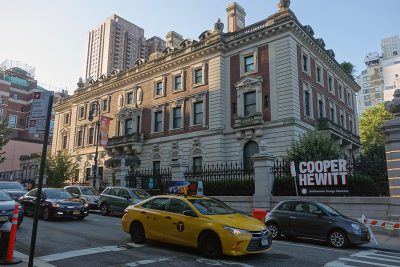 The Cooper-Hewitt had a strange innovation. They gave you an electronic pen which you used to tag the exhibits you found interesting. One end of the pen could be used on light tables to interact with a digital display. These were like giant tablets laid flat. Your ticket has a code for retrieving your visit. This eliminates the need to take a lot of photos to record what you saw. For example, I can determine that I saw the following at the museum during my visit; the Curiosity Cloud, a cloud of large light bulbs each containing an insect which fluttered within the bulb as you approached, a soft robotic grip glove, Visualizing the Cosmic Web which used a computer graphics technique for visualizing connections that I know how to create in JavaScript, a video of self-organizing robot pucks, a photograph of a jeweled mask, and a drawing for a design for a musaphonic clock. Not everything I tagged has been digitized yet. I remember I also saw a demonstration of facial recognition technology and how unreliable it can be. Overall I found the Cooper-Hewitt Design Museum an odd mix of exhibits which did not seem related to design. I’m not sure if I saw any of their permanent collection since everything appeared to be a special exhibit. This museum would definitely not be on my list for a first trip to New York City but if you’ve seen everything else in the city it is definitely worth some time. 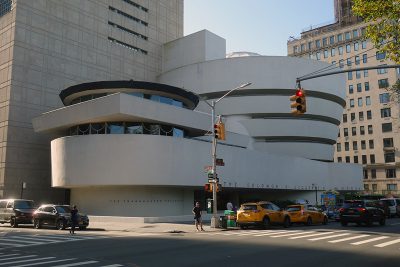 Next I went to the Guggenheim Museum just because it was nearby. I have been to the Guggenheim Museum a couple of times before but it is a major museum for modern art. I also have the bad habit of failing to return to museums to see their special exhibits, assuming that once I’ve seen their permanent collection there is no reason to go back there. The Guggenheim Museum had the following special exhibits; Artistic License: Six Takes on the Guggenheim Collection, Implicit Tensions: Mapplethorpe Now, the Hugo Boss Prize 2018: Simone Leigh, Loophole of Retreat, and Basquiat’s “Defacement”: The Untold Story. This exhibit examines Jean-Michel Basquiat’s exploration of black identity and his protest against police brutality after the death of artist Michael Stewart. There was a limit on the number of people allowed in the Jean-Michel Basquiat gallery so I had to wait in line. I was in the Guggenheim Museum until Noon. I walked up the spiral to the top floor and took photos of the skylight and looking down at the floor below. I even checked out the gift shop but I did not buy anything. 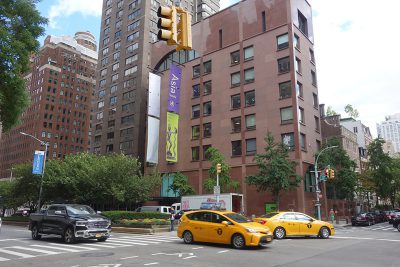 After seeing modern art at the Guggenheim Museum I walked to the 86th Street Station and took a downtown 6 train to the 68th Street – Hunter College Station. I found the Shakespeare & Co. book store where I bought a copy of Lear: The Great Image of Authority by Harold Bloom. They had a small selection of drama books so this seemed to be the most appropriate choice. Then I wandered several blocks all around Hunter College trying to find their Sylvia and Danny Kaye Playhouse. Eventually I figured out that it was boarded up for renovations so I had seen it but not recognized it. I then made my way to Asia Society, another minor museum which I had never bothered to visit on my time crunched day trips. There was not much to see at Asia Society and they appeared to be hosting foreign dignitaries for something going on at the United Nations. But I saw the exhibit Xiaoze Xie: Objects of Evidence. This exhibit was about banned books in Chinese so I was unfamiliar with them but it was interesting to see foreign books. The other exhibit was on Lakshmi, a Hindu goddess. I saw some interesting artwork representing the goddess including collages by the Brazilian artist, Roberto Custodio. 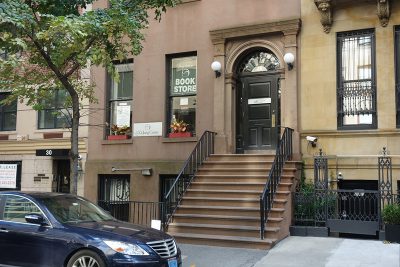 That completed my itinerary for exploring the Upper East Side so I returned to my hotel around 2:00 p.m. This left me with several hours to kill so I proceeded to do things on the next day’s itinerary. I felt like doing more shopping so I walked to the C.G. Jung Institute of New York. I wanted to take a photo of this establishment because I’ve read a lot of Jungian psychology. Unfortunately, modern psychology has all but abandoned the concept of the psyche or the unconscious mind and no longer considers it a factor worth considering. Jung is dismissed as an antiquated mystic. However many creative people are still into Jungian psychology because anyone who has confronted the depths of their being is obliged to take the psyche seriously. The C.G. Jung Institute of New York isn’t really open to the public but they do have a book store where you can buy books on Jungian psychology. I bought Jung in the 21st Century Volume One: Evolution and Archetype by John Ryan Haule and Jung in the 21st Century Volume Two: Synchronicity and Science by John Ryan Haule. These books were on my shopping list because they are an attempt to relate Jungian psychology to contemporary thinking. I paid almost a hundred dollars for these two books and they added a lot of weight to my luggage. Still they could very well prove to be the most significant find of my trip.

I walked past the New York Public Library but found its lion statues where covered in scaffolding boxes. When I got back to my hotel I tried the hotel cafe. I noticed they had an ATM but it probably would have charged me for withdrawals. I bought a can of coke and an ice cream popsicle which was charged to my room. I decided not to use the hotel cafe since it did not accept cash. 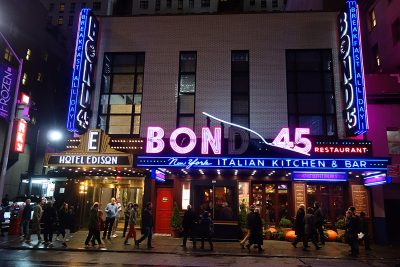 I had dinner at Bond 45. This turned out to be the most expensive meal of the entire trip. I ordered a Crab Cobb salad expecting it to be mostly seafood but it was an actual salad so I only picked out the crab, the cheese, the olives, and the eggs. I also had a glass of Prosecco, a coffee and tiramisu. 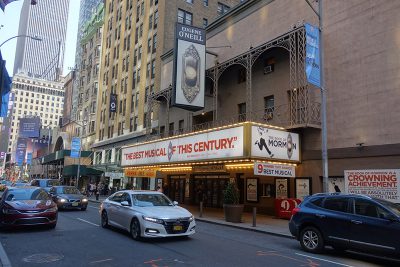 That evening was my first theater show on this trip. I was eager to spend an evening at the theater even though I made this trip to do other things in the evenings to experience a variety of night life. I saw the musical The Book of Mormon at the Eugene O’Neill Theatre. This was the very first Broadway musical I’ve seen since I prefer straight plays. I choose this show because I wanted to see inside the Eugene O’Neill Theatre and they could be doing this show for years and years. The Book of Mormon was a comical show. It was a bit juvenile and not very witty. I didn’t think any of the songs were memorable. Still it was extravagant and featured a good amount of dancing and inspirational songs. The show made fun of a major religion but was unable to completely dismiss the utility of religion for dealing with life’s challenges. It is a bit surprising that the subject matter was not more controversial since it made fun of Aids in Africa, but I suppose it is seen as being critical of well-intentioned missionary work that does not accomplish anything.