The second day of my vacation in New York City began with breakfast at Bond 45, an expensive restaurant just down the street from my hotel. This was a Sunday, September 22, 2019. I had a gooey cheese omelet and coffee which came to $28.00 plus tip. Needless to say I only ate breakfast there once! My goal for this day was to visit the Financial District to see the Museum of the American Indian, a minor museum which I’ve never seen before. I walked to the vast 42nd Street Times Square station and took the S train shuttle to Grand Central where I transferred to a 4 train to head downtown to the Bowling Green station. This requires walking for blocks underground clear across the 42nd Street Times Square and then clear across the Grand Central station so I’m not sure it really saves you from as much walking as going directly to the 51st Street Station.

I exited the Bowling Green Station from the headhouse in Battery Park and proceeded to photograph monuments in Battery Park like the East Coast Memorial and the Netherland Monument. I also found a few monuments I was not looking for like the American Merchant Mariners’ Memorial, the Korean War Memorial, the Giovanni da Verrazzano Sculpture, and the Immigrants Sculpture by Luis Sanguino. I found the Castle Clinton National Monument and walked inside to see where you buy tickets for the ferry to visit the Statue of Liberty and Ellis Island. I saw the Brooklyn Battery Tunnel Portal Building which is used as the fictitious headquarters of the Men in Black. 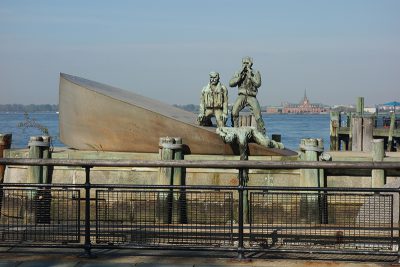 At 10:00 a.m. I was ready to see the Museum of the American Indian, also known as the George Gustav Heye Center, which opens at 10:00 a.m. Technically this is just an branch of the Museum of the American Indian which is based in Washington DC. This museum is housed in the Alexander Hamilton U.S. Custom House, a Beaux Arts-style building. I had to go through a metal detector to enter the building since it is also home to the United States Bankruptcy Court for the Southern District of New York. I had trouble finding the rotunda because it is located on the second floor. The rotunda features murals by Reginald Marsh which I photographed. Around the rotunda where black and white photographs by Ara Güler. Ara Güler was an Armenian-Turkish photojournalist. So why were his photos on display at the Museum of the American Indian? It appears there was an Intercultural Conversation on Ara Güler, an expert panel discussing the work, life, and legacy of the world-renowned Turkish photographer, held on September 24th at the Museum of the American Indian. The panel coincided with the opening of a new exhibit at the Alexander Hamilton Custom House, running from September 23rd through October 4th. 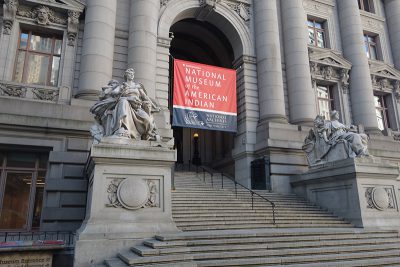 Museum of the American Indian

The American Indian exhibits were behind the rotunda. I saw lots of pottery, baskets, and buckskin clothing. The only thing that really interested me was a display case devoted to the Peyote Way. I used the restroom and then went to the gift shop where I bought a medium sized dream catcher, a Shaman’s Way CD,  and a book The Wind Is My Mother: The Life and Teachings of a Native American Shaman by Bear Heart with Molly Larkin. I did not intend to buy anything at this museum store but I could not resist anything related to shamanism.

After leaving the museum I quickly found the Charging Bull statue which was surrounded by a crowd of tourists as usual. However, I did manage to take one decent photo during a break in the crowd. Next I located the 3-Legged Dog performance space but it was missing all its signage so I’m sure if it still exists. I took the 1 train Uptown to 50th Street Station and returned to my hotel to drop off my purchases. 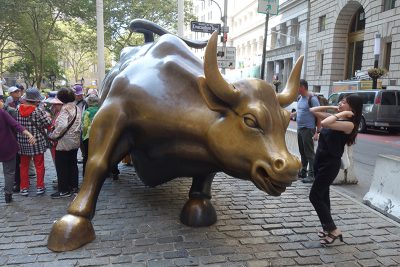 There was a Broadway Flea Market going on down a few streets so I found the Dramatists Guild table and bought a copy of Out Of The Water by Brooke Berman for $1.00. The flea market was very crowded or I would have spent more time looking for rare theater merchandise.

I made a special trip to a New Age book store, Quest Bookshop, which is associated with the Theosophical Society. The book store is located near the Lipstick Building and I’m rarely that far east in MidTown Manhattan which is why I’ve never visited this book store before. Unfortunately they had a poor selection of books on shamanism so after much deliberation I had to settle for the book Natural Prayers by Chet Raymo, which appears to be a book on nature mysticism. There was nothing else to see or do in that neighborhood so I returned to my hotel and had lunch at Carve: Unique Sandwiches. I had a mini sandwich Tuna Salad with Dill, with tomatoes, lettuce and mayo. And I drank a coke which I ate at the counter. After dropping off my book at the hotel I took an R train downtown to the 28th Street Station and photographed the Little Church Around the Corner. This church has some associations with the theater and actors. I located the Museum of Sex afterwards and found Madison Square Park where I managed to take another R train Uptown to the 50th Street Station. I went to a Duane Reade where I bought a bottle of Starbucks coffee and a small bottle of lotion. For dinner I went to Pret A Manger where I ate a Basil Chicken sandwich with Avocado, an apple parfait, and a can of coke. 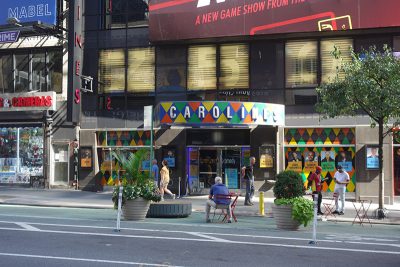 That evening was the first night life activity I had scheduled. I saw a comedy show at Carolines on Broadway, Natalie Friedman: First Impressions. I had never heard of this comedian before. Apparently she is famous for doing impressions of celebrities like Kim Kardashian. But I have gone without cable television for so long that I barely know who Kim Kardashian is. I only had a print out so an hour before the show I went downstairs and was given a piece of paper which serves as the real ticket. However, I did not want to wait for an hour at the bar so I walked around Times Square for awhile. When I returned to the comedy club they seated everyone numbered 1 through 20 first. I had number 22 so I had to wait a bit longer. The first group may have been let in early for a meet and greet with Natalie Friedman before the show. I did see her come in.

There were three comedians before the main act; Tyler Fischer, Jim Mendrinos, and Meme Simpson. Frankly I thought they were all better than Natalie Friedman. There was a two drink minimum so I ordered two cocktails; a Mai Tai and something with blackberries. These drinks must have contained very little liquor since they had no noticeable effect on me. After the show we were given lottery tickets so I thought there was going to be a raffle but these were just meant to show that we had met the two drink minimum. You had to present this raffle ticket as you were leaving.