I finally decided to spend an entire week in New York City for my vacation. The main purpose of this trip was to check out the night life, since all of my day trips end at 8:00 p.m. I have been prevented from doing anything in the evenings. I also thought it was about time to give New York City an entire week like the other cities I have visited. I actually spent eight days in New York City because I did not return home until Sunday morning. This did not give me a day to recover, but I didn’t really need that.

I booked a round trip to New York City with Fullington Trailways because Susquehanna Trailways no longer handles regular service to New York City. Their routes have been taken over by Fullington Trailways. I still parked at the Church Street Transportation Center and got on the bus there. I was carrying my Skyway carry-on bag with my laptop in the bottom and my favorite Protege luggage. I considered taking my largest piece of luggage so I could bring a lot of books home, but I didn’t want to drag a huge bag along the streets of New York City. The plan was to walk from the Port Authority Bus Terminal to my hotel and thereby avoid having to get a taxi. The bus ride to New York City took five hours with one transfer to another bus in Lehighton. 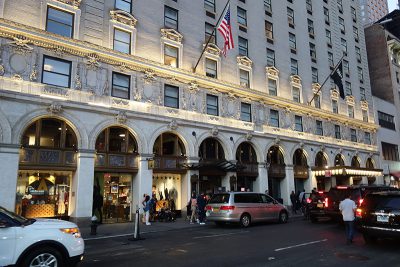 I arrived in New York City around Noon and used the restroom at the Port Authority Bus Terminal because I was not sure if my hotel room would be ready. I hauled my luggage four blocks north to West 46 Street. I was staying at the Paramount Hotel on West 46 Street, right in the heart of the Theater District. I had considered staying at Yotel but their rates were not competitive. Fortunately my room was ready. My room number was 1839 so it was on the 18th floor of the 19 floors. I got two room keys which were like credit cards. You could only operate the elevator with a room key and you only had access to certain floors. Getting the card reader to give you the green light proved to be a little tricky at times. My room turned out to be pretty small and cramped but I hardly spent any time there since I treated each day as a precious day trip and kept busy walking around the city. 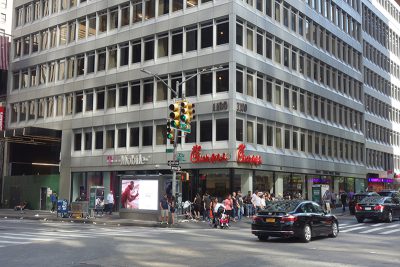 I was hungry after that long bus trip so I went to a Chick-fil-A on 6th Avenue for lunch. This fast food restaurant chain is not in my area so this was a new experience for me. I ordered a chicken sandwich and a coke. There were almost no tables so I had to stand at a counter to eat. After that I took lots of photos of establishments on West 46th Street because this was to be my base of operations. I also took photos of the theaters with advertising for the plays and musicals I was going to see. On West 46th Street I took photos of Brasserie Athénée, the Richard Rodgers Theatre which was showing the musical Hamilton, the Church of Scientology of New York, and Havana Central Times Square. I also took a lot of photos of establishments on West 42nd Street because I had discovered that I’ve never taken good photos of Ripley’s Believe It or Not! or Madame Tussauds New York. Although I’ve never been interested in the more tacky tourist attractions, I did buy a ticket for Ripley’s Believe It or Not online. This museum is like the last remnant of the dime museums, freak shows with bizarre attractions like flea circuses. In fact, Ripley’s Believe It or Not! also calls itself an odditorium since it features oddities. I didn’t see any actual freaks, just mannequins representing freaks of yesterday. All in all, Ripley’s Believe It or Not! wasn’t as bad as I expected, even though it was tacky. I saw some shrunken heads and a headless chicken. 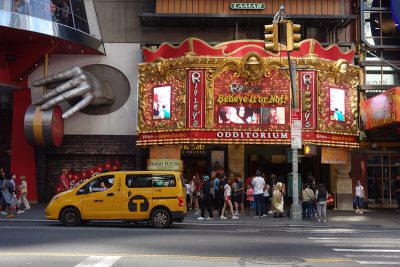 Ripley’s Believe It or Not!

I made sure to photograph the Eugene O’Neill Theatre, the Hayes Theater, Studio 54, and Carolines on Broadway because I was going to see shows there. I stopped in at One Schubert Alley and bought a lyrics book for The Book of Mormon since I was going to see that musical. Eventually I walked all the way uptown to West 57th Street and located the Art Students League of New York and Alwyn Court but they were covered in sidewalk sheds. I bought a 7 day Metrocard at the 57th Street Station for the F and M trains. It was difficult to tell which stairs to take because the signage did not indicate uptown or downtown, only the final station. I think I took an F train down to Bryant Park since I have a lot of photos of the park.

At some point I wandered east on West 50th Street to reach 6th Avenue and took photos of Radio City Music Hall and Fox News Corporation.

At 6:00 p.m. I had dinner at Brasserie Athénée which was near my hotel. I had the French Cut Chicken Breast wild mushrooms lemon jus and Trio Sherbert for desert. After dinner I wandered around Times Square a bit to see it at night. I didn’t have any plans that evening because I expected it to take longer to get settled in at the hotel.

This entry was posted in New York City, Theater, Travel and tagged Brasserie Athénée, Chick-fil-A, Ripley's Believe It or Not!. Bookmark the permalink.