Last night I saw a performance of Hamlet at the Trinity Episcopal Church. The play was put on by Studio 570, a local theater company which does not have a permanent venue or theater. The play was performed in the chancel, the space around the altar, while the audience sat in pews in the nave, the central part of the church. I had to look up church architecture to get that right! The problem with this was the acoustics. I could barely hear the dialogue. It was not too much of a problem since I’m very familiar with this play and its  dialogue.

The production was part professional and part amateurish. For example, the ghost of King Hamlet was just some scarves held aloft on a stick in front of an actor wearing a hoodie. I thought that was pretty lame. I think the play was meant to be set in a specific time period since many of the actors wore tuxedos and used guns for swords. The actor playing Claudius looked rather dashing and regal. Although the production failed to convey the full potential of Shakespeare’s masterpiece, it was an ambitious attempt and managed to present a curious spectacle due to the venue. 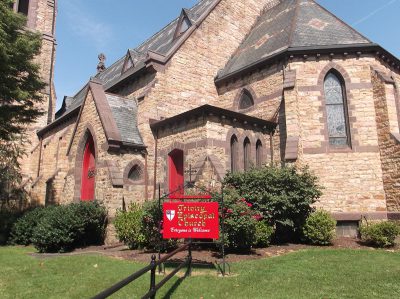 This opportunity to see Hamlet came at a fortuitous time because my interest in Shakespeare has grown acute. I am currently reading the book The Shakespeare Wars: Clashing Scholars, Public Fiascos, Palace Coups by Ron Rosenbaum and I’ve been buying a lot of DVDs. That very night I received a box set BBC Shakespeare Tragedies DVD Giftbox from Amazon. The reason for my renewed interest in Shakespeare is my recent insight that those who worship Shakespeare would likely be my natural allies. By this I mean that these are the sensitive souls who worship genius. In order to worship genius you must have great faith in human potential. As Hamlet puts it “What a piece of work is a man! How noble in reason? How infinite in faculty, in form, and moving how express and admirable? In action, how like an angel? In apprehension, how like a god?” To have the apprehension of a god you need to be inspired. I like to quote these lines from the Wikipedia article on artistic inspiration: “In Greek thought, inspiration meant that the poet or artist would go into ecstasy or furor poeticus, the divine frenzy or poetic madness. He or she would be transported beyond his own mind and given the gods’ or goddesses own thoughts to embody. ” The genuinely inspired poet is not giving voice to his thoughts. He is giving voice to the thoughts of the gods. Shakespeare was undoubtedly familiar with the divine frenzy of poetic madness which is why Hamlet has an antic disposition.

There is a phenomenon known as Bardolatry which is the excessive worship of William Shakespeare. Harold Bloom is famous for worshiping Shakespeare as if the poet/playwright were literally a god. I’ve recently read Harold Bloom’s book Hamlet: Poem Unlimited and picked out these lines:

Page 84
There’s a divinity that shapes our ends,
Rough-hew them how we will –

The divinity may be one’s own lost godhead, fallen into the world of love and sleep, and manifested now as one’s genius, hewing finer than one’s will can.

Page 88
I belatedly agree with Dame Frances Yates that the Shakespearean Theater of the World has subtle links to visionaries like Giordano Bruno and Robert Fludd.

Page 90
We do not (and need not) know Shakespeare’s prime malaise, but we know Hamlet’s: to be a mortal god in an immortal play.

Page 96
The Dionysian is a very old kind of man: an ecstatic.

Apotheosis is an extraordinary challenge even to Shakespeare’s powers of representation: how can you dramatize the exaltation of a human being to a seeming transcendence?

Page 98
Contending with unknown powers within his own self, the prince seems to struggle also with the spirit of evil in heavenly places.

I am convinced that Harold Bloom knows something of the divine frenzy of poetic madness and he was able to detect it in Shakespeare’s work. Note that he clearly related Shakespeare’s genius to the god Dionysus, the ancient Greek god of wine, ecstasy, and theater.

Shakespeare is often championed by reactionaries who wish to enshrine him as the exemplar of Western Civilization. I’m not interested in aligning myself with reactionaries, just those with a strong belief in the genius of the playwright.

So what is the divine frenzy of poetic madness in terms that modern man can accept? We cannot accept that the inspired poet is embodying the thoughts of the gods. Many people believe that the inspired poet has exceptional access to his unconscious mind and is simply giving voice to the depths of the human spirit. The original religious concept of genius was that it was a personal spirit guiding your destiny. In other words, genius is the personification of the unconscious mind which is your deep spirit guiding you through life. This makes perfect sense yet I am surprised how scholars struggle to explain human nature without using the concept of the unconscious mind. For example, Ron Rosenbaum attempts to account for the infinity of Shakespeare’s imagination without invoking the hidden depths of the unconscious mind which could easily account for that:

“Again, when Peter Brook says we are very close to the mystery of Hamlet, a mystery that has confounded four centuries of investigation, conjecture and debate by poets, madmen and lovers, attention must be paid. It seems that what he’s saying is that the mystery, the secret of Hamlet is the mystery, the tragedy, of bottomless consciousness. Of what it is to walk around with that kind of awareness. The same burden of awareness Brook suggested Shakespeare walked around with. And so what Brook is suggesting is that, in this aspect at least, Hamlet is the closest thing to a portrait of Shakespeare’s mind. When you think about it, the other characters in Shakespeare who suggest self-portrait, a portrait of Shakespeare the writer – Mercutio, Falstaff, and Bottom – each to a different degree, in a different mode, are burdened by knowing too much. Bottom having just had his dream of bottomlessness. Mercutio, someone for whom language itself is a dizzying spiral into which he almost disappears. Falstaff plumbing the bottomless depths of his own lies.”

The bottomless consciousness and awareness of knowing too much could easily be accounted for by exceptional access to the unconscious mind. Yet Ron Rosenbaum  apparently has never heard of the concept so he is completely mystified. It is shocking how many contemporary intellectuals are refusing to incorporate the theory of the unconscious mind into their thinking. They are left pondering mysteries that have been illuminated and they fail to make connections that would lead to real insights.