I visited the Arboretum at Penn State on July 27, 2019. Also known as the H.O. Smith Botanic Gardens, this is the only botanic garden in the region. I enjoyed the Lewis Ginter Botanical Garden in Richmond Virginia so it was great to find something comparable closer to home.

Before I went to the Arboretum at Penn State, I stopped off at the Centre County and Penn State Visitor Center. This had been on my itinerary for previous trips but I did not realize how close it was to the Beaver Stadium. As it turned out, finding the visitor center’s parking lot was not easy since another building and its parking lot are easily mistaken for the visitor center. I used the restroom at the visitor center. This would be convenient on future trips to the Central Pennsylvania Festival of the Arts. I checked out their gift shop but I did not see the book I was looking for, This Is Penn State: An Insider’s Guide to the University Park Campus. I picked up a few brochures and maps including a visitor’s guide to Lycoming Country and Lancaster. There was also an exhibit area which seemed geared towards children. 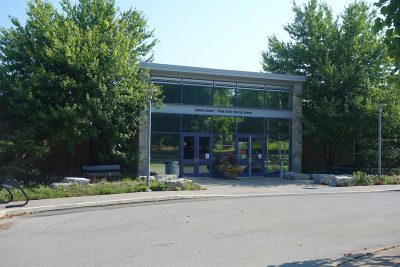 The Arboretum at Penn State was the main goal for this trip and it proved to be a worthwhile experience. This botanic garden is still being expanded but there was enough to see. I saw the Joel N. Myers Sundial, the Glass House, the Lotus Pool, the Margery Enes Smith Soaring Waters Fountain, the Marsh Meadow Boardwalk, and the American Bison Statue. They even had a fake cave in the children’s garden. The parking lot was full but I managed to get a spot. The Arboretum at Penn State is open to the general public and it appears to be quite popular. 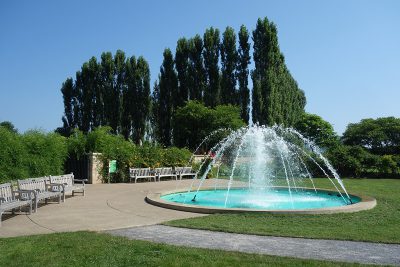 After strolling around the gardens I drove north on North Atherton Street to the Original Waffle Shop. This restaurant was extremely busy and I almost did not find a parking spot. The line to get in was very long but when I indicated that I was alone, I was directed to sit at the counter. I skipped the entire line and found a seat at the counter. I ordered a cup of coffee and a strawberry waffle with whipped cream. I thought it was pretty good but not so spectacular as to warrant such great fame. 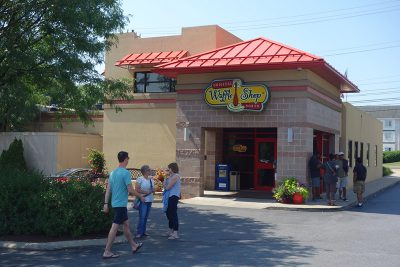 Next I drove further north on North Atherton Street to Colonnade Boulevard where several big box stores are clustered. If downtown State College appears to be small you should realize that there is more retail in the surrounding area. I went to Wegmans because I was curious to see another store. It was just like our store although they did have a large section cleared for remodeling. I only bought instant coffee and some coffee creamers. I forgot to mention that I did buy a cooler at Walmart to keep my beverages cold. I got the idea for this when my Gatorade became boiling hot on my last trip to State College. This is my first road trip using a cooler. I noticed a Targets store in the same shopping complex so I went there and bought two DVDs; Valentine: The Dark Avenger and Upgrade. I watched Valentine: The Dark Avenger when I got home. It is not a very good movie but it was made in Indonesia so it provides a fascinating glimpse of another culture. 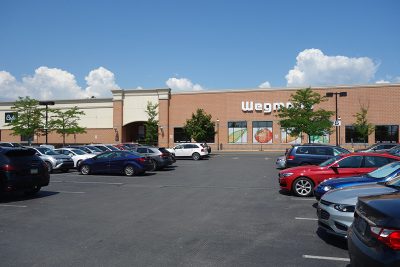 Those four destinations where the main purpose of my trip; Centre County and Penn State Visitor Center, the Arboretum at Penn State, the Original Waffle Shop, and Wegmans. But that would hardly justify the long drive so I also went downtown. I parked at the Beaver Avenue Parking Garage again because it is so convenient. This time it only cost me $1.00 to park there. I did not spend a lot of time downtown because I’ve already explored it pretty thoroughly. But I did want to photograph Happy Valley Launchbox and the Baby’s Burgers and Shakes diner. I found a few other establishments to photograph too like the Music Mart and the distinctive Grace Lutheran Church.

I went into Uncle Eli’s Artist Marketplace and Frame Shop just to look around. They had some interesting merchandise but not as much as you would expect so I could find nothing to buy. Instead I went to Webster’s Bookstore Cafe to make yet another raid on their drama bookshelf. This time I bought two books; Breaking the Silence by Stephen Poliakoff and Shakespeare as a Dramatic Artist by Richard Green Moulton. The Shakespeare as a Dramatic Artist book was not in great shape but it appeared to be readable. I decided to buy it anyway because I’m interested in how to be a good dramatic artist.

After doing that bit of shopping I went home. I could have spent a few more hours downtown but I had already met my objectives and I’d explored the downtown area pretty thoroughly.