On Saturday, July 6, 2019, I explored State College and the Penn State University. I had only been there once before, in 2015 for the Central Pennsylvania Festival of the Arts. That is not an ideal time for visiting the town because the festival tents are everywhere and the town is quite crowded. However, it is the Central PA Theatre and Dance Festival that gave me the impetus to do a more thorough exploration of State College. The new festival has only been held since 2018. It includes a playwriting festival which is of particular interest to me. Part of my mission was to locate the various venues used by this festival.

A major concern for this trip was finding a place to park. I did some research and decided that the Beaver Avenue Parking Garage was a good bet. I had taken a photo of this parking garage on my 2015 trip but neglected to identify the building. I input the address into my GPS device and was navigated there without incident except for a brief detour to the Innovation Park at Penn State. After parking my car, my first objective was to photograph the Fraser Centre which looms right across the street from the Beaver Avenue Parking Garage. The Fraser Centre is a curious example of urban development for a small town in Central Pennsylvania. It is more like the kind of urban development you would find in New York City. This massive structure houses residential condos, a Hyatt hotel, a Target store, a H&M clothing store, and a Federal Taphouse restaurant. 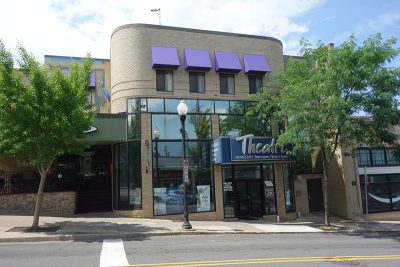 On West Beaver Avenue I walked past the Post Office and the Beaver Avenue Lot. I was originally going to park here, but there are far less spaces in that parking lot. One of the first establishments I photographed was the Penn State Downtown Theatre Center. This building also houses the Woskob Family Gallery. On my 2015 trip there was a festival tent set up in front of the building so I was unable to take a good photo of the place. I think the art gallery is closed on Saturdays so I did not attempt to enter. Next to the Penn State Downtown Theatre Center is an Amazon Hub Locker. This is another curiosity of State College. Why do they need or merit an Amazon Hub Locker? I assume the hub locker stores Amazon packages for customers to pick up instead of having them delivered. Maybe Penn State students are such industrious scholars that they need a special establishment just to handle all the books they order? 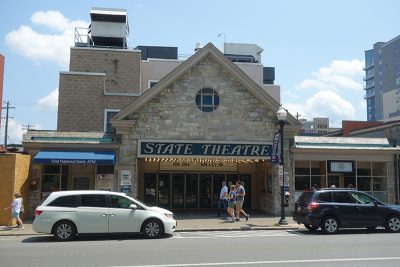 Next I crossed East College Avenue and photographed all the establishments facing Penn State University. East College Avenue separates the university campus from downtown State College. The State Theatre is on East College Avenue along with many restaurants. I needed photos to add these establishments to my custom travel guide. I then wandered onto the Penn State University campus, walking up Pattee Mall. Pattee Mall takes you to the Pattee Library but along the way I saw the Schwab Auditorium which is also used for performances and cultural events. I also saw the Sackett Building and the Carnegie Building. And I checked out the Old Main building but unfortunately its tower was wrapped in scaffolding so I was unable to take a decent photo of the most iconic building on campus. Nearby I saw the Penn State Obelisk, a geologic column of rocks.

Penn State University makes up nearly half the town of State College and many of the major attractions are located on campus. I really like strolling through a college campus since the grounds are so idyllic and the stately buildings represent learning and intellectual achievement. It is especially pleasant to be on a college campus while not having to attend any classes or deliver any lectures. I wandered through the place secure in the knowledge that it has no hold over me.

After reaching Pattee Library I walked around the building to see the Paterno Library. These two libraries are connected together but what there really is to see on the other side was a sign, some very fancy bus stops, and the east entrance. The bus stops were strangely impressive with a long shelter and electronic signs, as if the university had its very own transit system. Past the libraries I found the Pasquerilla Spiritual Center and the Palmer Museum of Art. I decided to visit the Palmer Museum of Art because it is one of the major attractions on campus and it is free to the public. The Palmer Museum of Art has two floors of exhibits. I saw a Cindy Sherman photo. They also had some nice glass pieces and a hallway of engravings. I used the restroom behind the gift shop. I was carrying my umbrella and they made me place that in the coat room. Upon exiting the art museum I found the sculpture garden but it wasn’t that interesting. But I did see a huge blue water tower. I don’t think that was a sculpture since it was massive. Nearby was the Stuckeman Family Building which appeared to be clad in copper which has turned green. Also in that area is the Theatre Building. 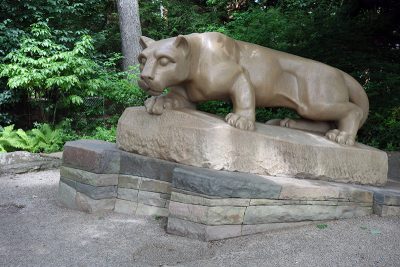 Next I found the the Nittany Lion Inn and behind that the Nittany Lion Shrine. As usual there was a line of people waiting to take photos of the Nittany Lion Shrine. This takes awhile since everybody wants to climb on the lion and have their photo taken. Fortunately there were not too many people, but a few with lots of kids. At this point I was baking in the hot sun and just wanted to return downtown to maybe enter an establishment to cool off. I walked down Burrows Road and saw a few grand fraternity residences and the Westgate Building, formerly the Information Sciences and Technology Building. 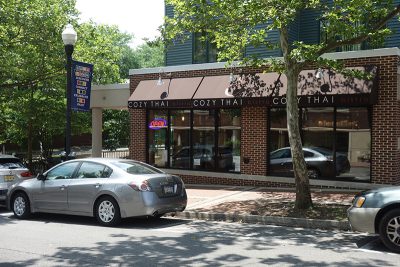 When I reached downtown State College I went to a restaurant on South Allen Street, Cozy Thai Bistro. I ordered the BBQ Chicken Thai Style which proved to be three large pieces of breast meat. I was only able to eat two. This meal also came with a small salad and some fried rice. The small salad had Thai peanut salad dressing on it. I didn’t particularly like that. This meal was reasonably priced and would satisfy any foodie. For Central Pennsylvania this was a mighty fine restaurant. 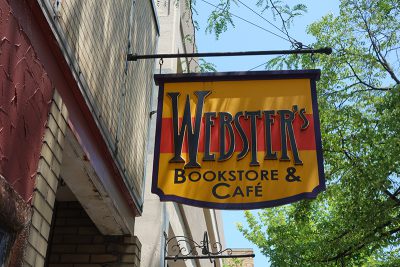 After lunch I was eager to do some shopping. There was only one place I really wanted to visit, Webster’s Bookstore Cafe. The book store’s owner Elaine Meder-Wilgus is a co-founder of the Central PA Theatre & Dance Festival. That may explain why the book shelf devoted to theater, plays, and drama was so well stocked. I splurged and bought four books; The Big Secret Live “I am Shakespeare” Webcam Daytime Chat-Room Show by Mark Rylane, Bond Plays 2: Lear, etc by Edward Bond, Andromache by Jean Racine (translated by Richard Wilbur), and The Stuff of Dreams: Behind the Scenes of an American Community Theater by Leah Hager Cohen. Mark Rylane portrayed James Halliday in the movie Ready Player One. The book I bought appears to have been autographed by him so that was an added bonus.

I returned to the Beaver Avenue Parking Garage to drop off my purchase and left my umbrella there too, which turned out to be a mistake. The sun finally came out and offered an opportunity to take more photos in better light so I retraced my steps along East College Avenue and even walked up Pattee Mall again. This time I did manage to photograph the Old Main Sundial and the Old Main Bell. When I reached the rear of the Pattee Library it began to sprinkle but the rain was pretty light. Eventually I located the Pavilion Theatre and even came across the Eisenhower Auditorium which I had totally forgotten about. When I got back to East College Avenue I was far to the east and a little lost. But I saw the McLanahan’s Penn State Room and the Waffle Shop. I also found the Inspiration Mural which is another thing I forgot to look for. I entered a store, the Family Clothesline, which sells a ton of Penn State merchandise. However, the only thing I found worth buying was a small sock monkey wearing a Penn State shirt. The cashier must have been a student because she had a lot of trouble ringing up the sale. By the time she managed that it had started to pour outside the store so I was stuck there for around fifteen minutes. They did sell some umbrellas but they were way overpriced. This was when I regretted not having my umbrella on me. When the rain finally let up I walked as fast as I could back to the Beaver Avenue Parking Garage, although I did stop to take several photos long the way. Just before I reached the Beaver Avenue Parking Garage it started to pour again so I got a little wet. It only cost me $6.00 to park there for six hours.

On the drive home I encountered some horrible weather. The rain was coming down so hard that I could not see the road. Visibility was reduced to zero and driving was nerve wracking. At one point I pulled off the road but I really should have done that sooner and waited longer. I was not pleased by the hazardous driving conditions which kind of ruined the whole day and made me regret going out. But overall my mission was a huge success. I took lots of photos and improved my knowledge of State College immensely. This weekend I will probably return for the Central Pennsylvania Festival of the Arts. I will probably also submit some plays to the Central PA Theatre and Dance Festival playwriting competition next year.