On June 22, 2019 I visited my favorite small town in Pennsylvania, Jim Thorpe. My last trip to Jim Thorpe was on September 16, 2017 and a few things had changed since then. It now costs $10.00 to park at the train station parking lot. The first thing I did was buy a ticket for the Lehigh Gorge Scenic Railway. I paid $19.00 for an open air car on the forested route to Old Penn Haven. This trip takes 70 minutes and began at 11:00 a.m. But I had about a half hour before that to kill so I walked up Broadway to take some photos.

When the train returned to Jim Thorpe I discovered that Blue Mountain Sports had gone out of business. It looks like their storefront is going to be the location for a new restaurant. My first shopping destination was Sellers Used Books where I bought the book The Evolution of Desire: Strategies of Human Mating by David M. Buss. This is an important work of evolutionary psychology which is hated by the lunatic fringe of the Far Left, the gender crackpots. I want to read this book so I’ll have more ammunition to use against their lunacy. Next I went to Soundcheck Records where I bought Annie Lennox’s 1992 solo début album, Diva, on CD. I listened to this CD on the long drive home but I did not care for it. After that I browsed the goods at the Emporium of Curious Goods. This store has a lot of New Age merchandise but the only thing that caught my eye was an expensive Art Deco statuette. I bought a Celtic Cross bookmark instead of that. I had lunch at Bear Appetit Cafe. I ordered a beef brisket sandwich which was more like pulled pork with shredded beef. It came with some tasty fries and a glass of Pepsi. While I was eating I could see a wedding party on the balcony of the Inn at Jim Thorpe. 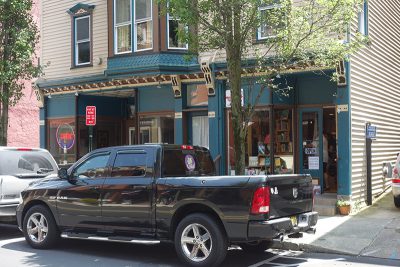 I returned to my car to drop off my purchases and then went to Woods Ice Cream where I bought a vanilla cone for desert. I ordered the medium size cone but this turned out to be a lot of ice cream. All this ice cream on top of the beef brisket sandwich was too much for my stomach and I experienced some painful twisting in my guts later on. After that treat I walked up Broadway to the bookstore Trappe Alley Limited. I always thought this was an antique store but actually it is more of an used bookstore. They have an excellent selection of theater books with an unusual number on acting. I bought the book The Technique of Acting by Stella Adler because I had recently read her biography. I’m also reading her books on script analysis which are very impressive. Stella Adler was clearly a genius who knew her own worth and would not let anyone belittle her. 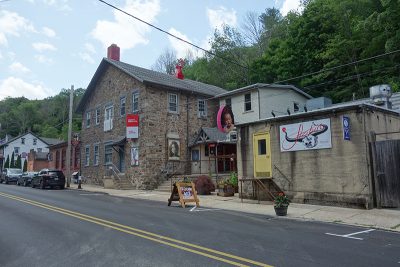 I walked far up West Broadway after buying that book, far into the west end of Jim Thorpe which is more residential. I discovered two new artist studios; Studio YNW Yvonne Wright and the Stabin Museum which is devoted to the works of Victor Stabin. The Stabin Museum appears to have been in Jim Thorpe for a long time but I never really checked it out. I explored the Stabin Museum and saw a lot of fantastic art work but the place was completely deserted. I also popped into Studio YNW.

Before leaving Jim Thorpe I climbed the hill to take photos of the Asa Packer Mansion, the Harry Packer Mansion, and Kemmerer Park. On the way home I stopped in at the Lycoming Mall. A large carnival was being set up in the parking lot. At Books-A-Million I bought a DVD, The Kid Stays in the Picture, a 2002 film version of the autobiography by film producer Robert Evans, and a book Elon Musk: Tesla, SpaceX, and the Quest for a Fantastic Future by Ashlee Vance. I also renewed my Books-A-Million club card.