On the fifth day of my vacation, my sister had to volunteer at the Lewis Ginter Botanical Garden so we went there. While my sister did her volunteer work I strolled around the gardens. First I explored the conservatory which has a tropical orchid wing, a palm house, and a cacti and succulent collection in its West Wing. The conservatory also had live butterflies in another wing. I had to be let into and out of that room to prevent the butterflies from escaping. After leaving the conservatory I did not get far before it began to rain. It was only a light drizzle which lasted for fifteen minutes but I waited it out in the Robertson Pavilion. Next to the Robertson Pavilion was a kaleidoscope sculpture by Matthew Leavall. I did not know that you could turn its wheel until June mentioned it later. I found the nearby Tea Garden but it was closed so I only went out on its deck. I saw a small creek with a plaque that read “Dot’s Garden”. After going through an area known as the Asian Valley I came across the Bloemendaal House which had a gazebo. It looked like they were setting up for an event, maybe a wedding. Next to the Bloemendaal House is the Children’s Garden where I saw a 100-year-old Mulberry tree that kids can climb on. Near the water play area I found the restrooms and some vending machines. Later on I bought a bottle of Pepsi and a package of cookie snacks from the vending machines and ate on the covered walkway up to the CWDKids Tree House. I explored the tree house which overlooks Lake Sydnor. After walking all around Lake Sydnor I arrived at the Louise Cochrane Rose Garden. I think I had time for another stroll around the entire garden before returning to the conservatory where I immediately found June. June wanted to walk through the grounds before we left so we essentially retraced my steps. This did give me a chance to take lots of photos of Lotus blossoms along Lake Sydnor which I had not given enough of my attention. June pointed out a few other things to me. Before leaving we browsed in the gift shop. I was not going to buy anything there but June left to go change her clothes so I had plenty of time to look around and eventually bought a book, Gilded Age Richmond by Brian Burns. After touring the Maymont Mansion I was a bit more interested in the Gilded Age. 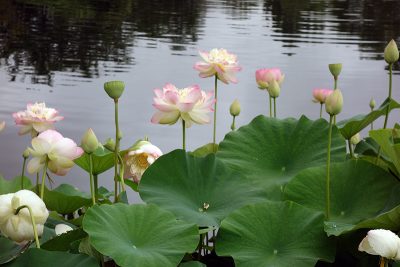 I forgot to mention that June 13th is my sister’s birthday so we finally went somewhere for lunch. We went to Lulabelle’s Cafe in the West End Antique Mall. I ordered Virginia Biscuits which where small buns, not biscuits, containing bacon and cheese spread. It came with a leafy salad and a small bowl of Thai Chicken soup. For dessert I had an ice cream sandwich with peach and cinnamon. I drank two cups of coffee to keep myself awake on this day. It turns out there were more buildings that are part of the West End Antique Mall. We only saw the furniture on our previous visit. The other parts of the antique mall were more of what you would expect in an antique mall, but the merchandise was high end stuff, not much junk. June bought a Murano glass bowl which was a good buy if it is genuine.

After lunch she drove me to Carytown for some shopping. Carytown stretches along West Cary Street and is similar to South Street in Philadelphia. Both streets are packed with boutiques and fine restaurants and serve as bohemian shopping destinations for the big city. First we saw artwork at Chasen Galleries because it was located right behind the parking lot where June lucked out finding a parking spot. We also saw a brightly colored building with a small mural, Ellman’s Dancewear. We went into a big candy store where I searched for a bag of candy to tide me over on the train ride home but I could not find anything suitable. As we were walking down the street, a car knocked over a motorcycle rider and started an argument. I used this opportunity to slip away and crossed the street to enter World of Mirth, a toy store. I was looking for some STEM toys and while they had a few things, there was nothing interesting for a serious maker. Next I went to the Plan 9 Music store where I bought a The Future Sound of London CD, The Isness. I was vaguely familiar with this British electronic music group and took a chance on this album. I listened to this CD on the long car trip home from Harrisburg but I did not care for it. 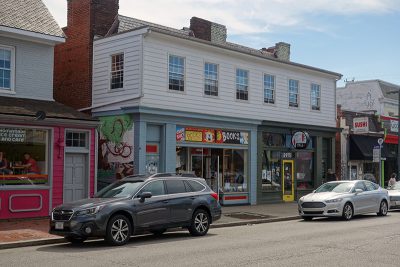 I crossed the street to meet up with June and we walked to the Byrd Theatre. I was eager to take photos of this cinema because the art print I bought as a souvenir featured the Byrd Theatre. Across from the Byrd Theatre was Chop Suey Books where I spent quite a bit of time browsing, trying to find just the right book. June was kind of rushing me so eventually I settled for The Strange Bird by Jeff Vandermeer. But this was a good choice since I am reading his book on creating imaginative fiction, Wonderbook. We had ice cream at Bev’s Homemade Ice Cream. I had coffee ice cream in the hopes that it would keep me awake. June insisted that we go to Tokyo Market, a cool Japanese grocery store, where I bought a bag of Milk Coffee Candy. That was mostly what I ate on the long train ride back to Harrisburg. After that we browsed Bygones Vintage Clothing, Askby, and The Clothes Rack. There were two art galleries I suggested but June determined that it would have been a long walk to find them. 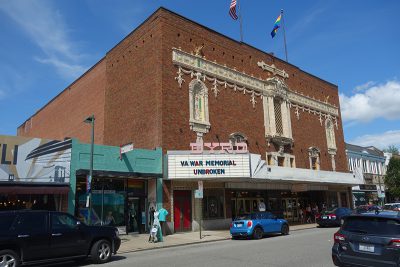 Before 6:00 p.m. we drove to Agecroft Hall. I picked up our “will call” tickets at the box office, which was located in the Agecroft Hall office. Our tickets turned out to be nothing more than the theater program. I treated June to her ticket since it was her birthday and seeing this play was my idea. I think doing something unusual like seeing a play is an excellent and memorable way to celebrate a birthday. We ate on a seat in front of the
sunken garden since you were allowed to picnic on the grounds before the performance. I ate a roll filled with chicken salad and some cheese crackers, plus a small bottle of Sprite. A few people set up their picnic in the sunken garden where they were serenaded and entertained by a roving band of young actors dressed in Shakespearean costumes. I got to hear a brief recitation of some lines from Hamlet. This was neat because I was currently reading John Dover Wilson’s What Happens in Hamlet. June went back to the car and I eventually went back to the box office to use the bathroom. 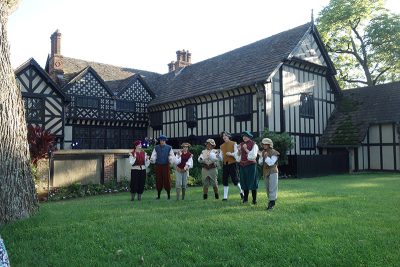 At 7:00 p.m. we took our seats and at 7:30 p.m. the outdoor performance of The Tempest began. The performance was very professional. I especially liked the character of Ariel who wore body paint and moved like a puppet. The actor playing Propsero looked a bit like Pierce Brosnan. It was interesting to see a play performed outdoors in the dark. There was a moon that night which added to the magic. Agecroft Hall was the perfect stage set in which to see a play by Shakespeare. I was worried that I would not be able to follow the story very well but I remembered a movie version of The Tempest. That helped me to anticipate the scenes. Seeing the play was definitely the icing on the cake of my trip to Virginia.