On the fourth day of my vacation, my sister took me to the Agecroft Hall. Agecroft Hall is a Tudor manor in Richmond. It looks like some place Shakespeare would have lived in so it is used for the Richmond Shakespeare Festival. We saw the stage and the seating all set up for the 2019 Richmond Shakespeare Festival. But for this day we were just there to tour the mansion and to see the gardens. First we watched a short film on the history of Agecroft Hall and how its materials were transported from Lancashire, England to Richmond. We were not allowed to take photos in the house which was furnished according to the Tudor period. But we saw beds, tapestries, old books, and portrait paintings. After the tour we went out to the sunken garden and the herb garden. The sky was overcast so I could not take any photos that do justice to the greenery but at least it did not get hot. The stone patio at the back of the house overlooks a field and some woods. It really gave me the impression of a grand estate. A yellow cat began to follow us around, meowing for attention. At the gift shop I bought a pack of cards, Shakespeare’s
Quips, Cusses, and Curses, Library of Congress Knowledge Cards for $10.50. 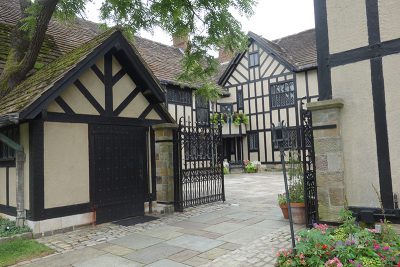 Next door to Agecroft Hall is the Virginia House, another manor house. June opened the front door to make inquiries but they no longer offer public tours. We could only take photos of the exterior.

We then drove to Carytown and stopped in at Montana Gold Bread Company to pick up some rolls and chicken salad with dill. We had a picnic lunch at the William Byrd
Park, near Swan Lake. From there it was short drive to Maymont Park. At Maymont Park we saw the herb garden, a carriage collection, and a water fountain before going on a tour of the Maymont Mansion. 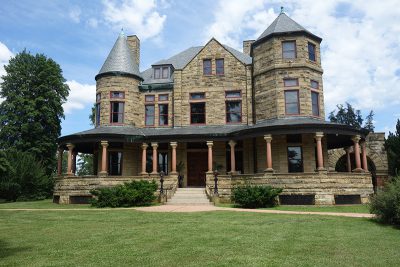 The Maymont Mansion was my favorite house tour of the trip since it was a really grand place. Built during the height of the Gilded Era, the interiors were lavish and impressive. These rooms were designed to convey the wealth of James and Sallie Dooley and they certainly gave that impression. Our tour guide was a retired English teacher, or maybe it was a History teacher, who was really into history. He led us through a parlor, a library, the dining room, a foyer, and upstairs to some bedrooms. One of the bedrooms had a fanciful swan shaped bed. After the tour of the house was over we went through further exhibits in the basement where the servant quarters were located. After that we took pictures of the exterior and the front entrance and even ventured onto the veranda. 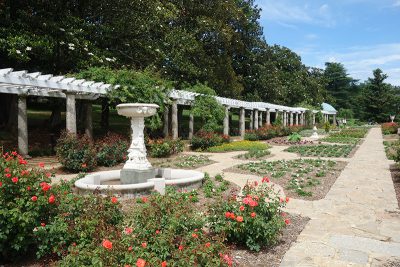 The rest of the day was spent strolling through the Maymont Mansion gardens. We saw the Italian Garden and the Japanese Garden which had a winding watercourse that leads to a waterfall and a large pond. The pond had Koi fish of course. Every Japanese Garden is going to have Koi fish.

We did do as much on this day because touring the grounds of Agecroft Hall and Maymont Park took up most of our time.