On the third day of my vacation, my sister took me to the Virginia Holocaust Museum. I did not include this museum in my notes since I think the Holocaust is too depressing but it was near the Edgar Allan Poe Museum. The Virginia Holocaust Museum is housed in a former tobacco warehouse. Admission was free and there was free parking. As you walked through each room the motion detector would turn on the lights. We saw exhibits on the Kovno Ghetto, the Nuremberg Trials with Nazi war criminal mannequins, displaced person camps, the SS Exodus ship, concentration camps, etc. There was also a synagogue and a Jewish Wall of Fame where I saw a plaque for the playwright Arthur Miller. Outside of the museum there was a cattle car or freight train car from Deutche Reichsbahn which was used to transport victims to the concentration camps. The exhibits were of some slight interest to me because I was currently reading a biography of Stella Adler and she was involved in the effort to smuggle displaced persons to Palestine. 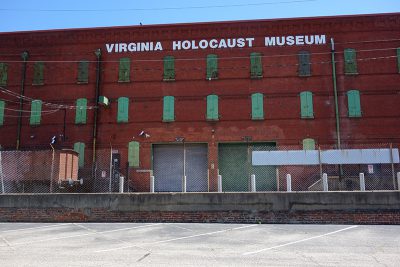 Next we went to the Edgar Allan Poe Museum, something I really wanted to see. I’m not a particularly big fan of Edgar Allan Poe but he really got around the East Coast. I’ve seen his grave in Baltimore, the Edgar Allan Poe National Historical Site in Philadelphia, and a recent statue of Edgar Allan Poe in Boston. We entered the museum through the gift shop. Making visitors enter through the gift shop seems to be a popular strategy for museums. While you are waiting for a tour to start, you are expected to browse the merchandise. Often you have to pay the admission fee in the gift shop as was the case for this museum. There were three separate buildings to enter although I expected everything to be in the Old Stone House. First we went out the back door to the Enchanted Garden, the courtyard which is surrounded by the museum buildings. The Enchanted Garden had a small fountain in its center and a Poe Shrine towards the back. Unfortunately the Poe Shrine was taken over by a tour bus group who appeared to be entertained with a dramatic telling of Poe’s short stories. First we entered a room which appeared to be an exhibit devoted to Poe’s days in Richmond. This room mainly had furniture like his bed, a chair, and a piano. The next room we entered had a more elaborate collection of artifacts and impressive displays like a large Edgar Allan Poe Memorial sculpted by Richard Henry Park. This large sculpture was originally on display at the Metropolitan Museum of Art in New York City. I’m not sure if this was a copy or the original. This room also had an upright coffin which you could stand in to have your picture taken and a seated statue of  Edgar Allan Poe missing its left hand. I also saw Poe’s chair. Up the stairs was the reading room which only had one shelf of books. But there was also a Poe portrait gallery over the stairs and a few movie posters. The film poster for “Der Rabe” puzzled me but this turns out to be German for “The Raven”, the 1963 film starring Vincent Price, Peter Lorre, Boris Karloff, and Jack Nicholson. The final room was devoted to Edgar Allan Poe’s death. I mentioned to my sister that I had visited his grave in Baltimore. I also mentioned that I had read part of a biography on Edgar Allan Poe which I never finished reading. This was the book Edgar A. Poe: Mournful and Never-ending Remembrance by Kenneth Silverman. When we returned to the courtyard we saw two black cats which live at the Edgar Allan Poe Museum. At the gift shop I bought the book Great Horror Stories: Dover Thrift Editions by various authors, a collection of classic horror short stories. 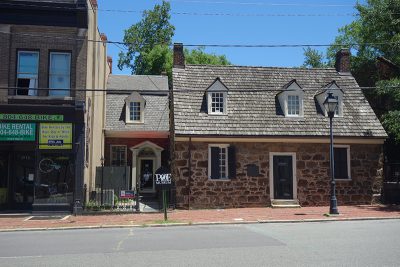 Before leaving the Shockoe Bottom we saw a freight train go by, pulled by a CSX locomotive. The next museum we visited was The Valentine. June had trouble finding a place to park but eventually she found the rear parking lot where a valet parked the car for us. This was another museum with its gift shop at the entrance. Right off the bat we got a
tour of the Wickham House even though there was just the two of us. The Wickham House had an impressive spiral staircase and various furnished rooms to see. We learned about the Valentine Meat Juice which was the basis of the Valentine fortune. I liked the dining room which had old engravings of scenes from William Shakespeare’s plays. A Google search reveals that these are prints from The American Edition of Boydell’s Illustrations of Shakespeare. See Boydell Shakespeare Gallery. We heard the story of how John Wickham defended Vice President Aaron Burr during his trial for treason. This was part of the same story we heard at the Virginia State Capitol. When the tour of the house was over we saw the rest of the museum which featured large display cases full of artifacts of significance to Richmond’s history and culture. There was a Woolworth lunch counter display to represent the Civil Rights Movement. Downstairs we saw lots of black and white photos of Richmond landmarks. They even had a costume department with a woman to explain how they preserve and research costumes, although I did not see that much need for costumes at this small museum. As far as I could see, they only use a few mannequins. 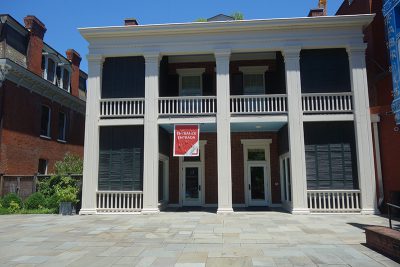 We had lunch in the garden behind the Wickham House. I had a toasted cheese sandwich with a slice of tomato which June said was a Southern touch. I also had French potato salad, and a plastic cup of iced coffee. They gave us wooden utensils and cardboard straws which I did not like. 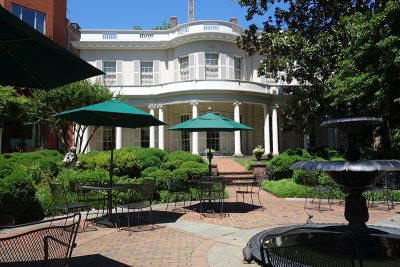 After lunch June drove down to a parking lot next to the James River so we could walk across the suspension footbridge that runs under the Robert E. Lee Bridge to Belle Isle. Belle Isle is used as a city park and it appeared to be quite popular. There were many people sun bathing on the flat rocks in the James River. Other people were walking their dogs or strolling along the trail. I saw many great blue herons in the James River who did not seem too shy of humans. There was a large quarry pond. After walking clear around the island we went back over the suspension footbridge which afforded a great view of the Richmond skyline. Then we walked to yet another footbridge, the T. Tyler Potterfield Memorial Bridge, and crossed the James River to the other side before turning back. Even then we proceeded to walk a little ways along the Riverfront Canal Walk. I saw the Headman Statue on Brown Island. 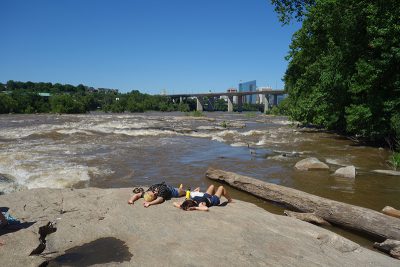 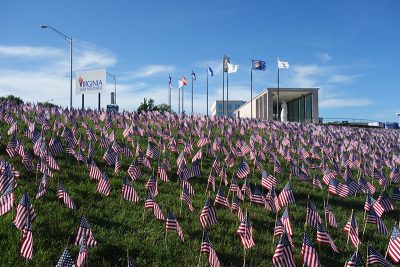