My vacation actually began on Saturday with a drive down to Harrisburg PA to catch an Amtrak train to Richmond. I made it to Harrisburg without incident and managed to get across the bridge, but I did have some trouble navigating the streets to the train station. There was some road work going on which added to the confusion. But eventually I managed to find my way to the Transitpark parking lot. I could not find a way to walk from the parking lot to the train station. You actually have to walk around the block and down a tunnel under the bridge. I tried to check in my baggage but you actually have to handle your own baggage. It has been a long time since I used Amtrak to make day trips to New York City so I was uncertain about many aspects. 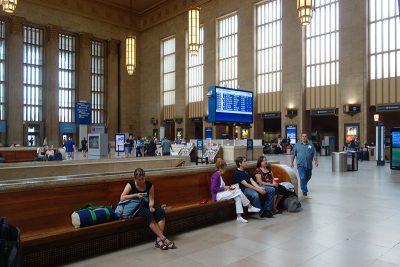 When the train arrived in Philadelphia’s 30th Street Station I had an hour before I had to transfer to the Northeast Regional train. I used the restroom and had lunch at a Pret A Manger because there would be no wait for my food. Pret A Mangers are like cafeterias where you just select packaged sandwiches, cans of soda, and deserts like yogurt parfaits. That is exactly what I got. I took a few photos of the 30th Street Station since it was featured in the recent film Glass. Also, on NYC day trips I don’t think I ever got off the train to see the interior of the train station. After getting settled into a seat on train 195 I was waiting for the train to depart when they announced that everybody had to evacuate the train. At first I thought it was just my car, but everyone had to get off due to a fire scare. After about an hour we were allowed to reboard the train. I sent my sister June some text messages to let her know that I would be delayed.

During the long train ride south I read the book John Dover Wilson’s What Happens in Hamlet. I didn’t even use my smartphone or Kindle because this book kept me entertained for most of the down time on this trip. The train took me through Baltimore, Washington DC, Alexandria Virginia, and Fredericksburg Virginia so theoretically I could visit any of those cities. I saw lots of giant condominium apartment buildings in the vicinity of Alexandria Virginia. June was waiting in the parking lot for me at Staples Mill Road Station and pulled around to the curb to pick me up.

Sunday, the first full day of my vacation, began with a prayer meeting and hymnal singing in June’s living room. Due to my interest in comparative religion, this wasn’t as boring as it would be for a dedicated atheist. I observed everything with a clinical eye and found the short ritual especially interesting. This ritual was the breaking of bread and the drinking of wine which seemed to be based on the Eucharist in the Catholic Church. A ritual is a symbolic action, a gesture that is meant to demonstrate something. Various other aspects of the service seemed to function as an emotional support meeting for the care of the soul with individual testimonials. There were no ecstatic moments during which the Holy Spirit could be said to enter into someone. I would have found that interesting for its shamanic aspects.

After the meeting was over we went to the Virginia Museum of Fine Arts, one of the best experiences of my trip since I love art museums. The Virginia Museum of Fine Arts was large enough to satisfy me with a wide variety of artwork. This was the only day of my trip when rain was a problem so I had to carry both of our umbrellas in my pant pockets.  I saw a Salvador Dali painting. He is one of my favorite artists. I saw some Fabergé eggs which the museum is famous for having. There was a monumental statue of the Roman emperor Septimius Severus. I found Henry Prellwitz’s painting Lotus and Laurel which I had in my notes, a great painting with classical figures. One piece that really caught my eye was an Art Nouveau female portrait bust by Alphonse Mucha, Nature. Alphonse Mucha is the artist who designed the poster of Sarah Bernhardt which is used on the book cover of Madame Sarah by Cornelia Otis Skinner, the book I bought in Eagles Mere. We also marveled at the Mughal Garden Pavilion which I thought was some kind of Islamic arcade. More precisely it is a Persian style of architecture used for the walled enclosures of gardens. 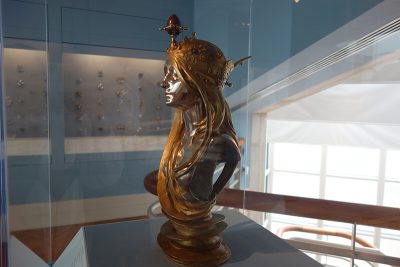 From the windows of Virginia Museum of Fine Arts I saw a small church which appeared to be open to the public. We checked it out and it was the Confederate Memorial Chapel, with a Civil War canon on its grounds.  We went inside and saw its stain glass windows. Also in the vicinity of the Virginia Museum of Fine Arts is the Robinson House, a historic house which is now being used as a visitor’s center with a few small exhibits. We picked up many brochures at the Robinson House and I kept dropping brochures as we visited the Virginia Museum of History and Culture next door. At the Virginia Museum of History and Culture we saw coaches, rifles, an art gallery of paintings, a streetcar, a Conestoga wagon, and Civil War murals. I was amused by an exhibit of old technology and media which included things like an IBM XT, a Windows XP laptop, a Walkman, a Gameboy, a VHS tape, and a Zip Drive. They even had a smartphone on display which isn’t exactly obsolete yet. Some of these history museums are getting way ahead of themselves and display contemporary artifacts as if they were trying to make you feel old. 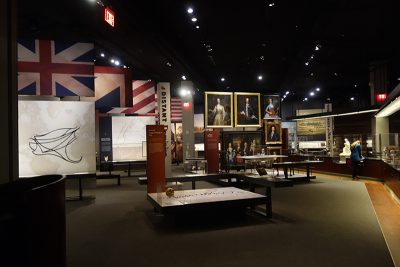 Virginia Museum of History and Culture

Next we drove to the Hollywood Cemetery were June parked by the gates. We walked a little ways along the cemetery roads but it began to rain so we went back to the car and then drove along the cemetery roads. We managed to find the mausoleum of W. W. Pool, aka the Richmond Vampire. We also found the memorial of the Confederate States President, Jefferson Davis. Nearby was a chapel with a great overlook of the Richmond skyline. We also found the mausoleum  of Lewis Ginter which was of interest to June because she volunteers at Lewis Ginter Botanical Garden. Finally we found the President’s Circle after much driving around and saw the graves of James Monroe and John Tyler. We were still in the Hollywood Cemetery after 6:00 p.m. when it closes so a guard chased us out, but he was nice about it and opened the gates to let us out. 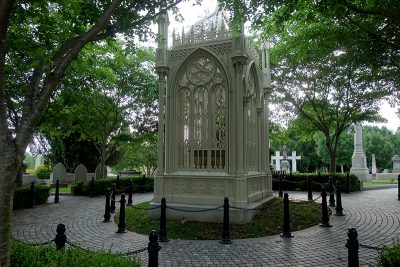