On Monday I started my day with breakfast at Caffé Nero. This became my routine and I almost always ordered the same thing; after grabbing a yogurt parfait I also got a croissant and a medium cup of café au lait. I won’t bother mentioning that again. I did fill up one loyalty card and got one free cup of coffee.

The first thing I did was to go downtown and photograph more theaters. I tried to photograph every theater in Boston’s small theater district but some construction prevented me from getting a good shot of a few theaters. I did notice that a talk by the intellectual Jordan B. Peterson was being advertised so I waited until the sign had cycled back to that ad before taking a photo. Jordan B. Peterson is a Jungian psychologist. I discovered his videos on YouTube before he became embroiled in controversy. I came across the Edgar Allan Poe Statue on Boylston Street which I almost forgot to seek out. I also took a few photos of the Central Burying Ground. 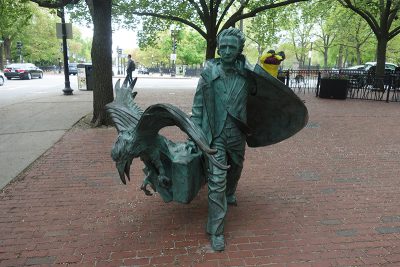 I reached the Brattle Book Shop just after it opened and bought Druids, Dudes and Beauty Queens: The Changing Face of Irish Theatre edited by Dermot Bolger. I took more photos of the Irish Famine Memorial and Commonwealth Books. Next I found the Old State House and walked to City Hall. I went across Congress Street to Faneuil Hall and walked though the Quincy Market. I located Newbury Comics but I had to wait until 10:00 a.m. when they opened.  I bought a graphic novel Doctor Strange: What Is It That Disturbs You, Stephen? which was kind of expensive at $31.86. I’m not into comic books but the Marvel movies are fantastic and Doctor Strange is their most mystical character.

I walked to Government Center T Station and took the Green Line to Park Street where I transferred to the Red Line. I took the Red Line to South Station and then the Silver Line to Courthouse Station. I left purchases at my hotel room because I hate carrying things around all day.

My major goal this day was to visit the Isabella Stewart Gardner Museum. It did not open until 11:00 a.m. To get there I just repeated my trip on the Green Line from yesterday. I have read a lot about the Isabella Stewart Gardner Museum. I even read a book about its famous art heist, The Gardner Heist: The True Story of the World’s Largest Unsolved Art Theft by Ulrich Boser. This museum reminded me of the Fonthill Castle in Doylestown, Pennsylvania. The museum architecture was based on a Venetian palace although this was only really evident in the garden courtyard. Gothic Venetian windows looked out on a lush courtyard filled with palm trees and classical statues. I took photos from every side of the courtyard since it was quite lovely. I  explored the first floor, then the second floor, and finally the third floor. Each room had its walls filled with paintings and there were tables and other furniture covered with various types of art objects and artifacts. It was like going on a tour of a grand but ancient mansion filled with musty relics. Some items were blackened with age so the overall effect was a bit shabby for all of the splendor. 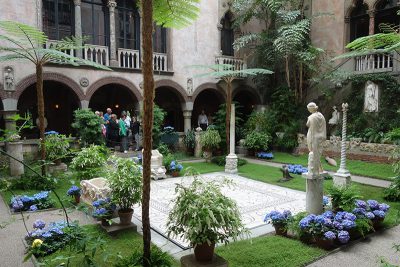 There was only one art gallery not in the palace. I saw the Fra Angelico: Heaven on Earth special exhibit in the Hostetter Gallery. Fra Angelico was an Early Italian Renaissance painter. There would have been a wait to have lunch at the Isabella Stewart Gardner Museum so I skipped it. I also did not find anything interesting the the museum book shop.

I took the Green Line up to Government Center. I had lunch at the bar of the Union Oyster House. I ordered a rum drink, a fish sandwich, and Hot Indian Pudding for $38.92 including tip. Next I walked around Faneuil Hall again and found the Black Rose, an Irish bar, where I ordered a drink, an Irish Apple. Then I came across the Old State House again which I decided to visit. It cost $10.00 for the museum admission and I sat through a short lecture on the Boston Massacre. 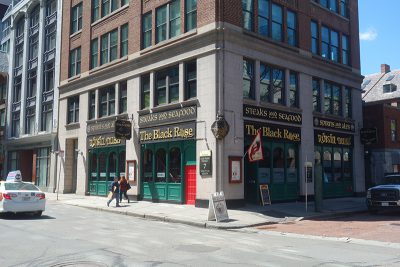 I walked through the Quincy Market again and discovered that Faneuil Hall was closed until June. I walked over the Seaport District Bridge to return to the hotel since it was less bother than using the subway.