Since YOTEL does not offer a complimentary breakfast I walked to a nearby Caffe Nero at 7:30 a.m. and had a Cafe au lait, a yogurt, and a Kouign Amman croissant. They gave me a loyalty card which will come in handy since I will have breakfast there every day for almost two weeks. 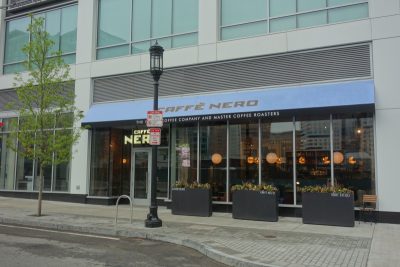 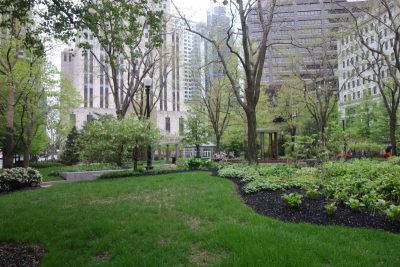 I spent most of the day at the Museum of Fine Arts. To get there I took a Silver Line bus to South Station where I transferred to a Red Line Inbound subway to Park Street. At Park Street I transferred to the Green Line and took the E Branch to the Museum of Fine Arts Station. It was slightly confusing to find the trains for the E Branch. It was located at the far end of the platform. 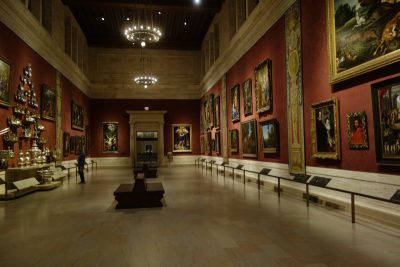 The very first thing I saw at the museum was some musical instruments including a lyre guitar which struck my fancy since the lyre is associated with poets. Next I saw some Egyptian statues before finding the Art of European by crossing the Shapiro Family Courtyard. Among the high lights of the art I saw were works by John Singer Sargent, Jackson Pollock, and the special exhibits; Klimt and Schiele: Drawn, Phantasmagoria, and M. C. Escher: Infinite Dimensions. One of the more clever ideas I saw was a nautilus shell with electronics or something coming out of it. Maybe I could turn that into a craft idea. It must have been the Nautilus Beaker which was engraved and filled with something made of silver.

I had lunch at the New American Café in the glass-enclosed courtyard, aka the Shapiro Family Courtyard. I ordered a cup of coffee and the turkey grilled sandwich which came with potato chips and a dill pickle. Everything was tastier than you would expect. The sandwich was great and very flavorful. The potato chips may have been hand made and even the dill pickle sliver was something special. 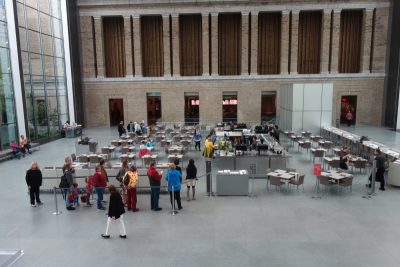 At the museum book store I bought The Art Instinct by Denis Dutton. This book was on my Amazon wish list because it explains how our sense of beauty was shaped by evolution. I’ve been quite impressed by how well evolutionary psychology explains human nature. And I’ve always struggled to understand my own boundless appreciation for art. I was tempted by a DVD, Miss Hokusai, but the museum store was charging twice what it costs on Amazon so I just made a mental note to check it out. 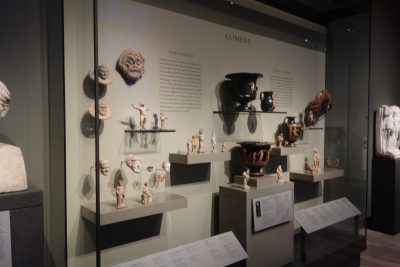 I think I managed to visit every gallery even though I was wandering between floors and collections all day. I almost neglected to visit the third floor which has the fewest galleries, all devoted to modern art. I entered the museum at 10:00 a.m. just as it opened and did not leave until 3:45 p.m. so that was almost five hours.

I took the Green Line back to the Park Street Station. I should mention that the Museum of Fine Arts Station has no fare control or ticket machines so I did need to use my Charlie Ticket 7-Day Pass to board the trolley. The Green Line trains are more like electrified trolley cars than subway trains. 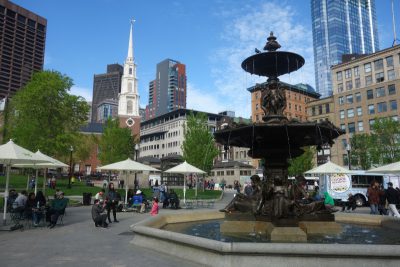 I wandered around Boston Common and took photos of the Massachusetts State House, the Robert Gould Shaw Memorial, and the Boston Athenaeum. I then walked to the Public Garden to find the Make Way for Ducklings statues which had little kids crawling all over them so I could only take one photo. I went to Cheers where I sat at the bar and ordered Boston Clam Chowder and a drink.

I then did a little exploring in Beacon Hill and found Louisburg Square, Acorn Street, and the Sloane Merrill Gallery. There were many professional photographers at Acorn Street taking wedding photos or fashion photos.

I walked up Washington Street and found the Brattle Book Shop but it is not open on Sundays. I entered the Red Line Downtown Crossing station near Primark and returned to the hotel. At 7:45 p.m. I walked around the Seaport District to take some photos of the Boston skyline in the evening. I still encountered a few professional photographers including one who seemed to be taking wedding photos of a well dressed couple.