Today was the first day of my vacation in Boston. I drove down to Philadelphia to catch a flight to Boston since Harrisburg does not offer any direct flights. It was raining most of the day and it was even raining in Boston when I got there. Philadelphia International Airport has changed a bit since I’ve last gone through it. There was some kind of grab-and-go gourmet market which was completely devoid of any staff. You just grabbed an item and paid for it using a self-checkout kiosk which was basically just a large tablet. The passenger waiting areas had also changed with some kind of tablet arcade where passengers could entertain themselves while waiting to board. It was kind of weird since there were customer facing iPads everywhere.

Only water was served on the flight since it was a very short flight. There was no in-flight entertainment unless you downloaded an America Airlines application for your device to stream media. I just read a little bit of a book on my Kindle. When we arrived at Logan International Airport I found my bag in baggage claim right away. It was almost freakish how quickly I found my bag because it was going around the conveyor belt just as I got there. But finding a taxi was not as easy. I had to cross the street and walk along the underpass until I found were the taxi stand was located. It was not exactly curbside and clearly caused a lot of confusion. The cab went through a tunnel, probably the Callahan Tunnel, and brought us into Boston near Haymarket Square. The cab driver crossed the Fort Point Channel over the Congress Street Bridge and seemed to be taking me behind the hotel but eventually he turned right onto Seaport Boulevard and deposited me in front of YOTEL, the pod hotel where I would be staying.

I needed some assistance using the YOTEL kiosk for self check-in. My room was on the tenth floor. It is a very cramped room but it has everything I should need and I won’t be spending much time in it.

Due to the rain in Boston, there wasn’t much I could do on my first day. I checked into my hotel around 3:00 p.m. so there wasn’t many hours left until evening. I did manage to visit a restaurant, the Barking Crab, which was a short walk from my hotel. It was very crowded. I had a traditional lobster roll and some New England Cider which came to $40.00! 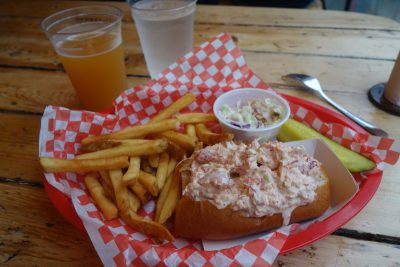 I entered the Courthouse MBTA Staton and bought a 7-Day Link pass CharlieTicket. The ticket machine would not work with my credit cards or debit card. I had to use cash. You do not need to use your ticket to board the bus since the turnstiles serve as fare control. I rode a Silver Line bus to South Station. The bus drove through a tunnel to reach South Station. At South Station I took the Red Line to Downtown Crossing. I found an exit that brought me out on Washington Street where Primark and Roche Bros. is located.

I took some photos of the theaters on Washington Street and found a Bank of America ATM where I withdrew $200. Then I located the Irish Famine Memorial and found Spring Lane where Commonwealth Books is located. I found their shelf of theater books and bought Albert’s Bridge and Other Plays by Tom Stoppard for $25.00. When I left it was raining hard so I found the State Street Station in the Old Massachusetts State House and took the Orange Line to Downtown Crossing where I transferred to the Red Line to South Station and finally the Silver Line SL3 to Courthouse Station. 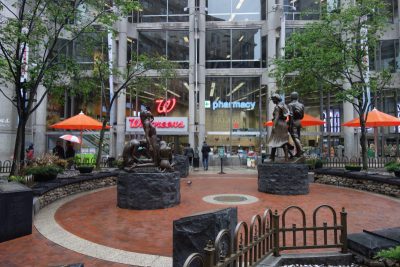 I had wanted to do a lot more on my first day in Boston but the rain put a damper on my plans. Still I managed to get around using public transportation and saw some of the landmark sights. Tomorrow I plan to visit some major art museums which should take most of the day.