On Sunday April 22, 2018 I drive down to Lewisburg to see the Gaspipe One Act Play Festival for 2018. I chose this date to avoid driving home in the dark and to give myself a little time in Lewisburg. Although the shows did not begin until 2:30 p.m. I left at 1:00 p.m. It takes a half hour to drive to Lewisburg so that left with an hour in town before I went to the theater. I parked on a side street to be nearer to the theater and thereby avoided a parking meter. First I went to the Barnes & Noble at Bucknell University Bookstore where I bought a paperback book of The Dispossessed by Ursula K. Le Guin. I was tempted to buy a book of poetry after finding they had an entire shelf devoted to poetry, but I decided to go with a smaller book. After doing that bit of obligatory shopping I went to Vennari’s Pizza on Market Street where I ordered a slice of pizza and a Pepsi. This cost me only $2.50 or so and has become sort of my routine when in Lewisburg to see a play. I took a few photos while I was in town just to make the trip worth my while but I have already documented Lewisburg pretty thoroughly. 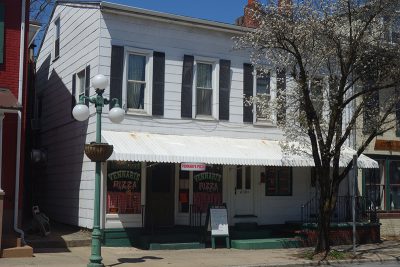 The Gaspipe One Act Play Festival is supposed to feature the work of local playwrights and I even submitted a play to them this year but my play was not accepted. This really disappointed me because I thought it would be a shoe in and serve as the introduction of my work to the local theater community. But I channeled my emotions into more writing. In fact, I spent most of Saturday writing another 15 minute play for a more important playwriting competition. This competition was for a New York City theater company which does plays as audio podcasts. They offer three prizes which are actually a decent amount of money. Wining first prize would probably be a big deal since they are based in New York City and utilize top Broadway talent as voice actors. The play I submitted represents my new effort to charm the audience with whimsy and fantasy and a great metaphor. I wrote it exactly as I conceived it, meaning it turned out just as poetic as I imagined. I am always pleased when I give form to my imagination that faithfully. In many respects I just happened to write something that fit the requirements of the playwriting competition so I think it has a good shot.

There were seven short plays performed for the Gaspipe One Act Play Festival. I was tempted to skip it in a huff but I was curious to see what sort of work they did select. The first play was “Will Work For Food” which featured two homeless men debating the kindness of the public. I thought it was slightly predictable but generally well done. The next play was “The Lesser of Two Evils”. Amusingly, part of the set fell over before the play could begin and the actors had to put things right. It was a large bureau which fell over scattering things on the floor. Naturally the audience found this pretty funny. Unfortunately, the two actresses in this play did not speak loudly enough so I could barely make out what the play was about.

The third play was “Isn’t That Just Like Us?” by Allan Bates. This play was infuriatingly tedious since the concept seemed to be nothing more than the amusing miscommunication between a doddering old couple on what to get out of the refrigerator. This involved frequent trips across the stage, back and forth, back and forth, in a shuffling gait that kept you waiting for the next line of dialogue. The next play was “The King-Anning” which was probably the best play of the lot. It was a charming scene of the King of Saxony flirting with the proprietress of some sort of archeological curio shop. Then there was “Where’s This Train Going” which was another predictable subject, the New York City subway play. Since I visit New York City often and have gotten pretty used to the subway, this play benefited from my pleasant associations with riding the subway. This play had a surprise ending which was effective because the actress was totally believable as an innocent tourist.

The sixth play was “The One” by Laurie Knitter. The scene was a dinner date with a man who disputed basic math, insisting that 2 plus 2 equals 5. I thought this was a good subject since people are getting more and more dogmatic to the point where we can’t even agree on the basic facts of reality. However, this play could have been based on a more serious example than simple addition.

The final play featured the largest cast and seemed to be the major effort of the festival. “The Court of the Chaos Queen” was written and directed by Ben Hartman who also introduced every one of the plays that evening. So this was definitely a local playwright. I couldn’t quite follow the action of the play, but it seemed to be about a group of villains plotting to assist the Chaos Queen in stealing a man away from his girlfriend. I liked the Chaos Queen who was dressed in a cape and what might have been intended as a super hero outfit.

Over all the plays were mostly comedies which seems to be the case in most one act play festivals. This may be due to the fact that it is hard to establish a tragedy in only fifteen pages, while a short comedic scene is certainly possible as a skit. But there did not seem to be any point to any of the plays which I imagine were written to flesh out a good idea. The writers did not seem to have anything to say. I try to always have something important to say because there is nothing worse than producing something which you grow cool to. Once you become indifferent you no longer care what happens to what you have written. The danger in writing something that does has something to say is that you will be more disappointed when it is rejected. 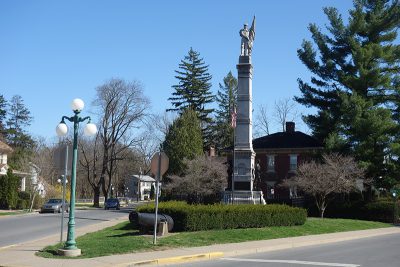 Before I left Lewisburg I located a Civil War obelisk and took a few photos of it. This was the last landmark in Lewisburg which I had yet to see. It wasn’t much to look at but I did spend a lot of time looking at Civil War monuments in Gettysburg so it reminded me of that. Before going home I stopped in at Burger King and ordered a Whopper and a milk shake as a reward for doing my cultural duty.

This Saturday I will be going on a bus trip to New York City to see Matthew Broderick in The Seafarer by Conor McPherson, at the Irish Repertory Theatre. Now that is what I am really excited about.

This entry was posted in Pennsylvania, Theater, Writing and tagged Gaspipe One Act Play Festival 2018, Lewisburg. Bookmark the permalink.