My final day in Chicago was mostly spent at the Museum of Science and Industry. This museum is far south of the downtown Loop so I had to use the Metra system to get there, the trains for suburban commuting. I began my day with breakfast at the hotel; omelet and sausage patties, Yogurt, orange juice, banana, and coffee. I tried to eat as much as possible to reduce expenses. On this day I took my umbrella with me because the sky was overcast but in the end I didn’t really need to have it on me.

I walked to the Millennium Station and asked a ticket agent for a ticket to the Museum of Science and Industry, which is in fare zone B. The ticket cost me $4.00. It was easy to find the right track and I was able to just walk right onto the train and find a seat. The conductor came through the train later to punch tickets. I rode the Metra train to the 55th/56th/57th Street Station. From there it was a short walk to the Museum of Science and Industry which had an entrance on the street, far from the imposing building entrance. I went down a spiral staircase to get to the entry hall. Adult admission was $42.00 for the Explorer 2: Museum Entry and two ticketed experiences. This is certainly an expensive museum! I choose the U-505 submarine tour and the Robot Revolution special exhibit. It also cost me $3.00 for a coat check but a least they did not charge me extra for my umbrella. I bought my ticket at 9:50 a.m.

I spent a lot of time in this museum to get my money’s worth. I’ve become slightly more interested in science now that I’m playing around with artificial intelligence, but only the Robot Revolution exhibit ties into that. I had to watch the time to make the U-505 submarine tour and the Robot Revolution exhibit because my ticket was a timed ticket. The U-505 submarine tour was pretty much the first thing I did. This may be the forth submarine I have been in.  I can’t remember if I ever did the submarine in Baltimore’s Inner Harbor. Somebody jokingly asked if I had clearance to photograph the Enigma machine on display and I was tempted to cite my credentials as a computer scientist since Alan Turing, a hero in the computer science field, was responsible for the crypt-analysis that decoded the Enigma machine’s messages. Other exhibits at the museum focused on space exploration, transportation, and the laws of physics. I saw a huge Boeing 727 jumbo jet hanging from the ceiling, a steam locomotive, and a train layout for model trains featuring a huge model of Chicago and its skyscrapers. 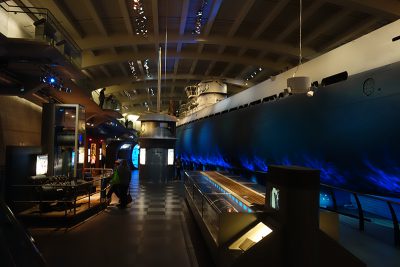 The Fairy Castle dollhouse of the silent-film star Colleen Moore was quite whimsical and noteworthy. I don’t think I had ever heard of her before. This museum was really geared towards school children just like most natural history museums. There were many interactive exhibits which were usually monopolized by children. For example, the “Science Storms” had a water vapor tornado, a tsunami tank, and a Tesla coil. There was also a tube where you could experience high wind and I tried that out. 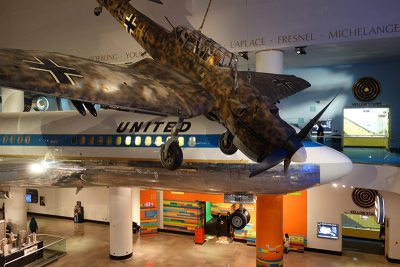 I bought a panini ham and Swiss sandwich and frappuccino at the Museum Cafe at 12:42 p.m. Later on I also bought a Turtle Sundae at Finnigan’s Ice Cream Parlor at 2:08 p.m. 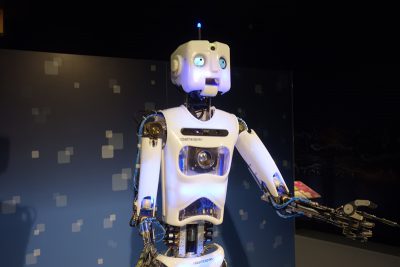 The Robot Revolution exhibit mostly featured drones and toy robots but there was also some drag and drop computer programming to try which I found amusing. I also saw lots of bikes with innovative designs and model ships. There were a few old cars but not many. I finally left the museum around 3:00 p.m. I searched the museum store for something to buy but it was mostly just toys with only a few books on science that might interest me. In the end I walked out without buying anything.

I bought the return Metra ticket One-Way Zone B-A at 3:10 p.m. and was able to board the train immediately. I barely had enough time to even take a photo. I returned to my hotel but found my room had not been cleaned yet so I went back out for a long walk. First I went to a Pret A Manger store and bought a tuna baguette, a Honey Banana Bowl, and a can of coke. Then I walked along the Chicago River and  up the Magnificent Mile shopping corridor, then back down Rush Street. This was a very long walk since this was my farewell to Chicago, the last I would see of the city. I did come across some very high end stores selling luxury goods. I must say that Chicago has an impressive amount of retail in its downtown. There was a lot of places to shop around my hotel and the Magnificent Mile was like a vast shopping mall. I took lots of photos of the Chicago River with the skyscrapers lit for the evening and I took some final photos of the iconic Chicago Theater.

In conclusion my vacation in Chicago was a great cultural experience. I learned a lot more about one of the nation’s great cities which I was surprisingly ignorant about. I’ve heard a lot about Chicago but I never really pictured it or had any idea what was to be found there. It seems a little surprising to me that there can be such a huge city far from the West and East Coasts.

This entry was posted in General, Travel and tagged Museum of Science and Industry, Robot Revolution, U-505 submarine. Bookmark the permalink.