I spent almost an entire day at the Field Museum of Natural History. The Field Museum is one of Chicago’s most famous museums and it is huge. I was planning on also visiting the Adler Planetarium and the Shedd Aquarium but I did not have time for that. I took the Red Line from the Monroe Station down to the Roosevelt Station. From there I walked to the Field Museum of Natural History which is at the lower end of Grant Park. There are many high-rise residential towers overlooking the museum including The Grant. I had to walk around the Christopher Columbus statue in Grant Park to find the underground passage to the Museum Campus.

At the Field Museum I exchanged my computer printout for a real ticket. The first thing I saw was the skeleton of a Tyrannosaurus rex, named Sue. This is one of the most famous fossils in the world. I’d even read a book about it, Tyrannosaurus Sue by Steve Fiffer. I then went through the permanent exhibition, Inside Ancient Egypt, where I saw mummies and walked though an ancient Egyptian tomb. Seeing Egyptian statues always reminds me of various occult appropriations of their culture like tarot cards and the magic symbols; ankh, scarab beetles, and my favorite the winged sun. 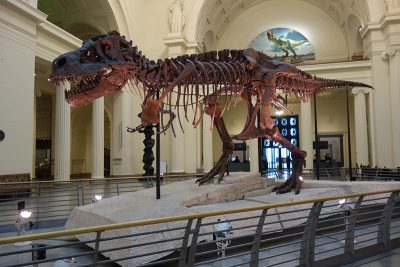 The next permanent exhibition I went through was the Underground Adventure which pretends to shrink you down to the size of a bug so you can go through a burrow in the soil and see giant animatronic insects, spiders, and grubs. I think I had to have my ticket scanned to enter this exhibition. After that I saw endless display cases of stuffed animals and birds. A few of the display cases were elaborate dioramas showing the animals in their natural habitat. I saw the two Tsavo Man-Eaters, lions which were infamous for killing and eating many humans in Kenya. 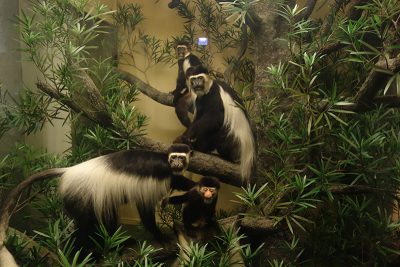 At 11:25 a.m. I ate lunch at the Bistro Cafe. I had an oven grinder, a bag of locally made chips, and an orange juice.

After lunch I saw the Evolving Planet exhibit which included more dinosaur fossils and the Cyrus Tang Hall of China which included a puppet show “Monkey King vs. Mountain of Fire” and a topographical map that light up as video from the area surrounds you on immersive screens. I also saw a special exhibit on specimens. The exhibit on North American Indians included a dancing shaman which I found particularly interesting.

I left the museum around 4:00 p.m. and returned to my hotel. My room had been cleaned but no towels had been left for me. I went to Walgreens at 4:37 p.m. to withdraw an additional $80.00 and then to the Revival Food Hall where I ordered a grilled cheese sandwich at Danke and a biscuit at The Budlong. I also bought a bottle of coke and a can of local root beer.

That evening was the second play I was to see in Chicago. I took the Red Line from Monroe Station towards Howard to the Clark/Division Station. I went off in the wrong direction on Division Street at first. But I still made it early to the theater, A Red Orchid Theatre, which is sort of down at the end of an enclosed alley. I saw Beau O’Reilly, founder of Curious Theatre Branch and local playwright, among the audience. It is an indication of how thorough my research on Chicago theater was when I’m able to recognize somebody in the audience, much less on the stage. The theater itself was squeezed into a very narrow space with the stage crammed to one side. You had to walk across the stage to get to some seats. Every so often there was a rumbling sound and the house lights would dim a little. At first I thought this was part of the show but it happened so randomly in relation to the plot that I suspect it was the L even though there should not have been a station nearby. 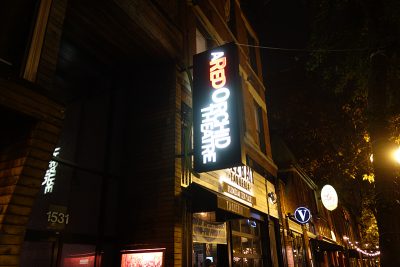 Evening At The Talkhouse by Wallace Shawn was a curious play about thespians living in some dystopian world where people are paid to target other people for money and anyone may be murdered for socially unacceptable behavior. Like a Pinter play, it relied upon implied threat and quiet menace. One of the characters, Nellie, dies at the end. I did not stay for the talk back.

Once back at my hotel I bought a bottle of Brisk Tea from the hotel vending machine but had to pay twice because the first bottle got stuck. This little detail was enough to sour my mood a little.

This entry was posted in General, Travel and tagged A Red Orchid Theatre, Evening At The Talkhous, Field Museum of Natural History, Tyrannosaurus Sue. Bookmark the permalink.