Tuesday marked the point in my vacation where I had definite plans which eliminated the need to find something to do. For breakfast, we were offered turkey sausage and scrambled eggs. I spent most of day at the Art Institute of Chicago. I was there from 10:30 a.m. to 4:00 p.m. Five and a half hours may seem like a lot of time to spend in a museum, but it was a huge museum and I managed to see almost everything there was to see.

I took many photos of the artwork just so I would have a record of what I saw that interested me. I don’t use audio guides and often don’t have any knowledge about what I am looking at. Instead I let the artwork speak for itself and make whatever impression it can upon me. This isn’t a bad strategy when you are making an once-in-a-lifetime visit to a famous art museum. If I lived in Chicago I would probably become a member of the museum and spend more time getting to know the art. Visiting art museums always makes me regret not spending more time exploring the art world. I have not even read the few books on modern art and artists which I have bought.

So based on my photos I can say I saw these highlights. First I found the Modern Art wing where I saw a Cindy Sherman photo. I’ve seen one of her photos in virtually every modern art collection. I also saw a painting by Giorgio de Chirico, one of my favorite artists. I found the Asian Art wing with endless statues of the Buddha. But I was especially pleased to come across some Noh masks from Japanese theater. It is a shame that there isn’t a theater museum anywhere in the world but I guess that is due to the nature of the performing arts which cannot be reduced to its artifacts. I also saw some Roman statues which reminded me of my trip to Rome and some Greek pottery including kraters and amphora. I saw a few society portraits by John Singer Sargent and three of the most famous paintings at the Art Institute of Chicago; Edward Hopper’s Nighthawks, Grant Wood’s American Gothic, and Mary Cassatt’s The Child’s Bath. There was one painting, The Captive Slave by John Philip Simpson, which I recognized because it was used by the Lantern Theater Company in Philadelphia to promote their play Red Velvet. 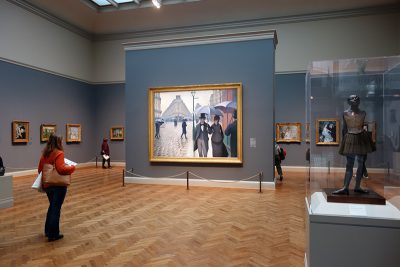 I had lunch at the Museum Cafe where I grabbed a metal bottle of Coke and a wrap.

I saw the special exhibit Soviet Art Put to the Test which was mostly printed materials like posters and magazines. Another special exhibit was Tarsila do Amaral: Inventing Modern Art in Brazil. And I saw two art films although I did not sit through the entire film. One of the films was by British artist Elizabeth Price and featured CGI animation of an assembly line. 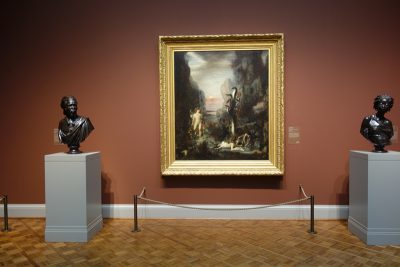 At the museum store I had a hard time finding an interesting book which would not be too large or heavy to take home in my luggage. Eventually I settled for Art Since 1989 by Kelly Grovier, one of the titles in the Thames & Hudson World of Art series which you often find in art museum stores. I will probably never read this book or investigate the artists it covers.

After leaving the museum and returning to my hotel room to drop off my book, I went back to the Revival Food Hall. This time I tried the Budlong stall and ordered spicy chicken and a bottle of coke. The chicken was a bit dry and got caught in my esophagus so badly that I had to go to the restroom and throw up.

That evening was the first play I was to see in Chicago. Although the main focus of my trip was to explore the Chicago theater scene, I only bought tickets to see two plays based on what was playing and the problem of finding my way to the theaters. Two plays in one week seemed plenty. At around 6:15 p.m. that evening I took the Red Line subway in the direction of Howards to the North/Clybourn Station. There is an Apple store near that station which helped me to orient myself. I was pretty early so I walked far up North Halsted Street to a Subway restaurant where I had a cookie. I walked past many other restaurants but none that seemed casual enough to get a quick bite to eat.

That evening I saw the play The Rembrandt by Jessica Dickey. This play was about art and art museums so it fit in with my previous visit to the Art Institute of Chicago. The play was performed at the Steppenwolf Theatre Company, one of the most famous theaters in Chicago. The stage was on the third floor which I reached through an elevator. I was quick to hang up my coat in the coat rack because I was getting quite tired of wearing my coat all day. I also used the restroom just to make sure my bladder was empty for the entire duration of the play which did not have an intermission. 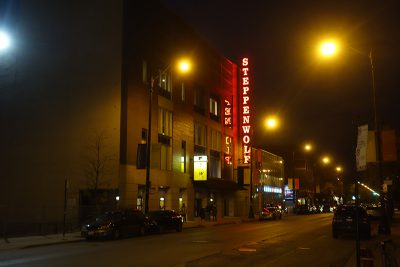 The set design was very elaborate which is something I always appreciate because I like the illusion of another place created on the stage. In this instance it was a museum gallery which wasn’t too exotic since I had been going through galleries all day. The play itself went back in time to the art studio of Rembrandt, the era of Homer which was not represented by its own stage set, and the modern apartment of a dying poet. I stayed for the discussion afterwards which was very insightful. The audience was well educated and understood that the play was about how art made connections between people across time. I also liked the idea that art should not be seen as so lofty that it is something we are not worthy to touch.

This day fulfilled my expectations that a trip to a big city like Chicago should offer better cultural experiences than you are afforded living in a small city out in the middle of nowhere.