On the first weekday of my vacation I still didn’t have anything major planned so I decided to explore the Wicker Park neighborhood. For breakfast I had an omelet and a cheesy muffin. I went to Walgreens at 8:41 a.m. and used their ATM to withdraw $100.00. There was no fee because it was a Cardtronics ATM. I then walked to the Washington Station and took a Blue Line train to the Damen Station. I quickly found the Big Star restaurant and then Wicker Park. Myopic Books opens early in the morning so I was able to go there. I could not find a shelf of books on the theater. The Science Fiction and Biography books were in the basement. I tripped over a mop bucket while browsing the shelves. Eventually I settled for The Cricket Sings by Federico Garcia Lorca because this poet is the focus of the book The Demon and the Angel: Searching for the Source of Artistic Inspiration by Edward Hirsch which I received just before leaving for my vacation. I did not get a bag but I was carrying a plastic bag with me in my coat pocket. 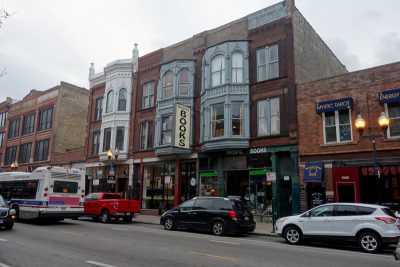 After leaving Myopic Books I continued to walk down North Milwaukee Avenue to check out other establishments. I saw another book store, Volumes Bookcafe, which I entered but their selection was poor so I did not buy anything. Next I came across the Restless Records store which I tried to enter but the door was locked. Restless Records did not open until 10:00 a.m. and I was a little early. I found the Den Theatre and walked all the way to Division Station where I saw the Polonia Triangle, Chopin Theatre, and the Occult Book Store.

I then walked all the way back to Reckless Records and bought a Grey Gardens DVD starring Drew Barrymore and Jessica Lange. Note: this is not the original documentary. I also bought a Bauhaus CD Go Away White. I think that was their last album and the only one I never bought.

I noticed a branch of the Al’s Beef restaurant along North Milwaukee Avenue so that is where I had lunch at 10:45 a.m. I ordered a Polish Chicago style hot dog with fries and a Mountain Dew which I poured myself. 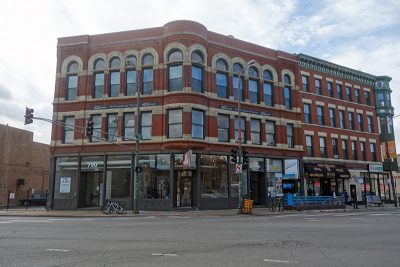 I took the Blue Line in the direction of Forest Park and got off at the Monroe Station. I took even more photos of the Four Seasons mosaic by Marc Chagall because it is very close to my hotel. I dropped off my purchases at the hotel and noted the room had not been cleaned by noon. I always wonder when I should return to my hotel to ensure that the room is cleaned.

There were not many other options for things to do on a Monday. A few museums I planned to visit were open but I had bought tickets online for other days of the week. I decided to visit the Poetry Foundation instead. I wasn’t sure if there was anything to do there but they do have a library open to the public. I took the Red Line subway in the direction of Howards to the Chicago Station. Before going to the poetry library, I photographed the Alliance Française de Chicago which was nearby. At the Poetry Foundation I saw a sign on the door asking visitors to wipe their feet because there was street construction going on in the area.  I signed in and took two brochures. I saw a small exhibit of political buttons. In the library I found the book The Living Fire: New and Selected Poems 1972 – 2010 by Edward Hirsch and read his poem “Isis Unveiled”. I returned the book to the shelf but you are not supposed to do that. I like to think that this was a significant symbolic act. One of the full length plays I have written is about a computer programmer who has forgotten all about poetry until an ex-girlfriend shows up to goad him into reading the work of Edna St. Vincent Millay. My play is a shameless claim to a frustrated literary destiny. But reading Edward Hirsch’s books have given me new hope since he seems to share my understanding of the poet as being an inspired visionary trying to capture the ineffable and the profound in eloquent language. I ordered a copy of The Living Fire on Amazon while I was in Chicago and it was delivered just before I wrote this blog post. “Isis Unveiled” is an interesting poem since it reveals an interest in the occult. As an explorer of the depths of the soul, the poet is an occultist. Edward Hirsch seems to have been following in the footsteps of William Butler Yeats when he wrote this poem. 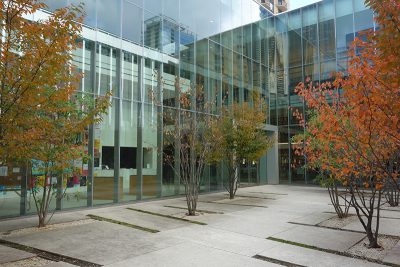 At around 12:50 p.m. I found Portillo’s Hot Dogs on West Ontario Street again and ordered a strawberry shake. They did not have sundaes. From there I walked to the Chicago River and took photos of the bridges, skyscrapers, and architecture. I even walked along the Riverwalk and came across a giant deer sculpture. I then thought I would go to another book store and try to buy a copy of Poetry magazine. But first I came across the James R. Thompson Center which I entered because it has a fantastic interior. I went  looking for Books-A-Million but the store had closed permanently some time after I had added it to my notes. I did came across the Berghoff restaurant and Russian Tea Time. 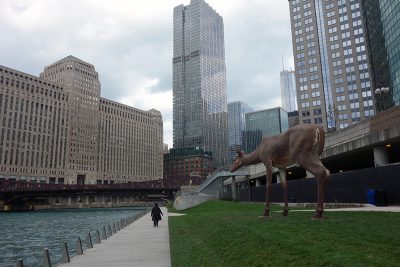 Next I went to the Chicago Cultural Center where I saw many exhibits on architecture. This was way more extensive than I expected. There were at least three floors of exhibits which included photos, models, and installations. I walked back to the hotel room and then went back out for supper. I went to the Rivival Food Hall. The Rivival Food Hall is a dining marketplace on the ground floor of The National building. It  offers a selection of stalls featuring many of Chicago’s favorite neighborhood restaurants in a casual dining setting. It was also very close to my hotel so it made for an excellent place to grab a bite to eat without a lot of hassle.  I choose the Danke restaurant. I ordered a grilled cheese but she thought I said goat cheese. I also got a can of local root beer. There is also an independent book store in the Rivival Food Hall but it was a little hard to find. At Curbside Books & Records I bought a copy of Poetry magazine for October 2017. I used to subscribe to this magazine from 1986 to 1988 but eventually I lost interest in poetry. I still like to read biographies of poets as tales of literary success but I often don’t read their poetry itself. I should probably resume my efforts to write and publish some poetry. It is a sorry writer who cannot accomplish even that given today’s vast publishing options. I’m sure there are thousands of online literary magazines publishing poetry which nobody ever reads.