I decided to visit Chicago for my vacation this year because it is the third largest city in the United States. Chicago is also a very important city in the country’s theater community with hundreds of storefront theaters and production companies. One of my goals on this trip was to learn more about Chicago theater.

I was able to get a direct flight from Harrisburg International Airport to O’Hare International Airport. I only spent about an hour and a half in the air so I only got a cookie and a small cup of orange juice during the flight. I was practically the last person to board the plane because I was held up checking in my bag. When we arrived at O’Hare International Airport I did not immediately go to baggage claim. First I took a few photos of the 72-foot-long Brachiosaurus skeleton in Concourse B. I also took a photo of Barbara’s Bookstore at the airport. I took a taxi into the city but we were held up by an accident so it took longer than it should. The taxi’s credit card machine was not working so I had to pay with cash.

I stayed at the Hampton Inn Majestic Chicago Theatre District hotel on West Monroe Street. This hotel is right next to a theater which keeps changing its name. It was the PrivateBank Theatre, then the Bank of America Theatre, and finally CIBC Theatre when I was in Chicago. The musical Hamilton was playing at this theater and I often saw excited theatergoers lined up outside waiting to get in. But I have good taste so I chose two serious plays to see while I was in Chicago. I was able to check into my room right away and even got to eat a complimentary breakfast after leaving my luggage in my room. However the dining area was very small and crowded. The selection of breakfast items was not very good but it did change a little every day. 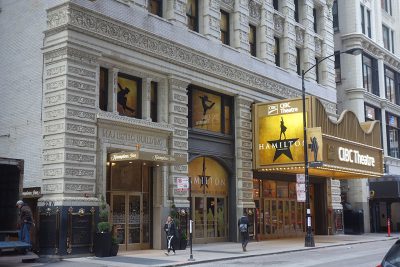 The first thing I did when I finally ventured out was to wander around the theater district and take photos of the downtown theaters; the Oriental Theatre, The PrivateBank Theatre, Cadillac Palace Theatre, Chicago Theatre, and the Goodman Theatre. Most of these theaters run Broadway style shows and major musicals. I would have seen a play at the Goodman Theatre but they weren’t doing anything interesting at the time. Eventually I walked to the Chicago River and began taking photos of the skyscrapers that line the river. The architecture is really impressive along the stretch of the Chicago River which runs to Lake Michigan. They were drawing up the bridges to let some sailboats through so I got to see that. 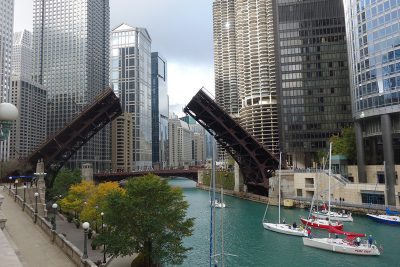 At 10:53 a.m I visited the American Writers Museum. This museum only recently opened in May 2017. It cost me $12.00 for admission. For a museum devoted to writers, most of the exhibits tried too hard to be interactive, but there were a few books on display. I saw the famous 120-foot scroll on which Jack Kerouac wrote out “On the Road”. I bought a book, The Best American Poetry 2016 by guest editor Edward Hirsch. Just before I left on this trip I had been reading his book How to Read a Poem: And Fall in Love with Poetry. It is the best book I have ever read on why one should read poetry. I’ve become intrigued by Edward Hirsch because he seems very interested in the visionary nature of the poet, the poet as the profoundly inspired soul. I also picked up an Eugene O’Neill bookmark. My receipt has the time 11:33 a.m. so I only spent a half hour at this small museum. 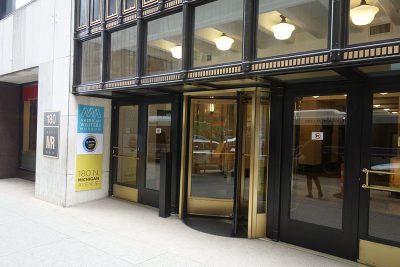 After that I walked to the Millennium Park and saw the Cloud Gate, the Jay Pritzker Pavilion, the Harris Theater, the Lurie Garden, the Chicago Stock Exchange Arch, and the statue Abraham Lincoln: The Head of State. I also walked far enough down Grant Park to find the Buckingham Fountain. The fountain was not filled with water. From there I walked west to the Harold Washington Library Center and then north on State Street. My camera battery died then so I was unable to take any more photos until I returned to my hotel. 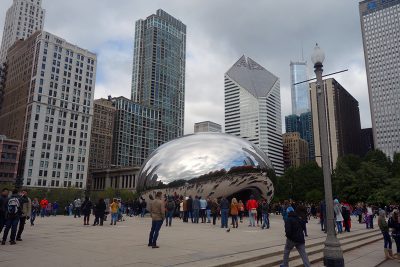 At around 1:00 p.m. went to Pizano’s for lunch. I ordered a coke and individual pizza with cheese and sausage. This turned out to be a deep dish pizza and took 35 minutes to prepare. I followed the server’s suggestion to order garlic bread as an appetizer. The garlic bread was enough for an entire meal so I only ate three. I didn’t particularly care for the deep dish pizza which was too much like a meat pie. Now that is what they call a pizza pie!

I went to a Reckless Records store across the street and bought a CD of Depeche Mode Remixes, Remixes 81-04. Depeche Mode is one of my favorite bands and I like to listen to remixes of their songs. They were playing Mother Russia by Sisters of Mercy in the store which was kind of cool. According to my receipt I made this purchase at 2:05 p.m. At 2:14 p.m. I went to Walgreen’s and bought an umbrella and a portable battery for recharging my smart phone on the go. As it turned out, I did not need either of these items although I should have taken my umbrella with me on my last errand.

I returned to my hotel to relieve myself of these purchases and went back out to take photos of public art. By 3:25 p.m. I had walked all the way to Barnes & Noble at DePaul Center on Jackson Blvd. and bought Everyman Library Pocket Poets edition of Dickinson: Poems. I was not given a bag for this purchase but fortunately it was a small book. Apparently Chicago has passed a law for a bag tax so you don’t get a bag unless you ask for one. It is really annoying. I put a plastic bag in my coat pocket to ensure that I always had a bag on me. The Emily Dickinson book was a good pick because she was mentioned later on in my trip during a night at the theater.

I walked up Michigan Avenue past the Art Institute of Chicago and found the Crown Fountain which I had overlooked earlier. I also checked out the Cloud Gate again. I walked past the Chicago Cultural Center and took a few photos of that. After leaving the book at the hotel I went right back out and took photos of the Chicago Theater lit up in the evening. Then I walked along the Chicago River taking photos of the skyscrapers as they began to light up for the evening. I walked all the way up North Michigan Avenue, aka the Magnificent Mile  and then west to find the Poetry Foundation. I even came across Portillo’s Hot Dogs and McDonald’s on West Ontario Street and then the Blue Chicago night club. Finally I took a lot of nighttime photos of the skyscrapers along the Chicago River.

This was a lot to accomplish on my first day in the city. I didn’t actually have anything planned for this day because I thought the flight and getting checked into the hotel would take all day. I walked 5.4 miles this day according to my pedometer.