I wasn’t sure I had enough activities planned for the second day of my weekend trip to Gettysburg, but I managed to make a full day of it. I did leave Gettysburg a little earlier than necessary. I had a complimentary breakfast at the hotel around 7:00 a.m. My first goal was the Lincoln Train Museum but it did not open until 9:00 a.m. Nevertheless I left my hotel room at 8:00 a.m. and walked down Baltimore Pike to Cemetery Hill and took photos of the monuments there. Then I crossed the street to the Evergreen Cemetery and took photos of the Jennie Wade Grave again. After that I walked back up Baltimore Street and went up Steinwehr Avenue as far as the Battle Theatre, aka General Pickett’s Buffet. Beyond that were the open fields of Pickett’s Charge. I did see one monument there.

The Lincoln Train Museum appeared to open early but I waited until just before 9:00 a.m. to enter. You are immediately in the gift shop when you enter the museum. I bought a ticket for the museum but was given a brass token to insert in the turnstile. I walked down a corridor led by video of Abraham Lincoln running on a series of LCD screens. Then I watched a short film about the Lincoln Funereal Train as a model train ran around a track. The train seemed to always make a complete loop before stopping at the next stop. After that I entered a railroad passenger car for a simulated train journey narrated by a video of an actor portraying Abraham Lincoln. Surprisingly there was some motion special effects using hydraulic jacks and the scenery outside the windows was video of the passing countryside. When that was over I was left to explore the rest of the exhibits. I ran the toy trains by pressing a button although that only worked for one button and one toy train. I had to exit through the gift shop. They had some nice merchandise but I wasn’t tempted to buy anything because I was almost done with Gettysburg. 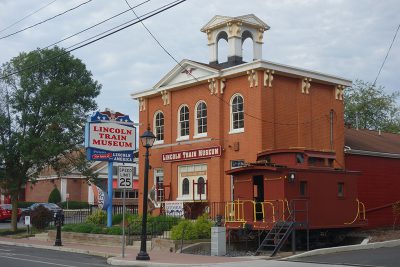 I walked back to my hotel and checked out. I then drove my car to the Soldier’s National Cemetery which provides free parking if you don’t mind walking.

Next I went to the Gettysburg Diorama. I had not researched this establishment and did not plan to visit it, but I didn’t have much else left to do. I bought a ticket for the diorama in the gift shop but they did not direct me to anything. So I wound up going down a long corridor downstairs only to find another gift shop. The corridor did have display cases of rifles and other Civil War artifacts but it did not strike me as being what my ticket was for. It turns out the diorama is located through a door towards the back of the gift shop. There is a light show and narration of the battle, so while the show is going on the door is roped off. It took me awhile to notice the digital clock showing how many minutes were left to the next presentation. I had to wander around the gift shop several times examining all the merchandise before I finally got to see the diorama. The diorama itself was pretty cool and showed the entire battlefield and the town of Gettysburg. It was like a toy train layout without the train. There were lots of toy soldiers of course. I knew the landmarks of the battlefield pretty well by then so I could follow the narration and see where I had been. The light show covered all three days of the battle and including night scenes of campfires and cannon muzzle flashes. There were also some Civil War artifacts on exhibit, some Civil War paintings, and smaller dioramas behind glass. I exited back through the gift shop without buying anything. I think I was also given a ticket for the Gettysburg Heritage Center but I did not want to see that again. 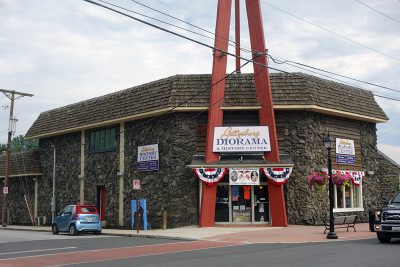 My final goal was the David Wills House. This is located on Lincoln Square so I had to walk all the way to the downtown area. The David Wills House has seven galleries with mostly just panels with information. I really don’t like these kinds of info panels. The Gettysburg Lincoln Railroad Station was also nothing but display panels. But I did see the original bed where Abraham Lincoln slept on the night before he gave his Gettysburg Address. But overall this attraction was very slight and a little dull. On the way back down Baltimore Street I did stop in at the Sweets Candy store on the intersection of Baltimore Street and Middle Street. I bought a chocolate bar, Jack Daniel’s Tennessee Honey – Swiss Chocolate Liquor. I could not resist buying some candy which contains whiskey. 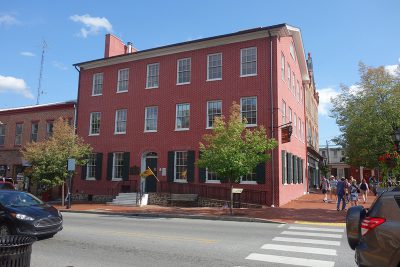 I left Gettysburg around 12:35 p.m. I could have spent a little more time in town but I had run out of things to do and it was Sunday so things were pretty quiet. There were also a few stops I wanted to make on the long drive home. For example, I stopped in at the Cupboard Maker Books on Route 15 near Harrisburg. I bought two science fiction books; The Hydrogen Sonata by Iain M. Banks and Orsinian Tales by Ursula K. Le Guin. I also stopped at Sheetz near Duncannon to fill up on gas and to use their restroom.

Once I reached Selinsgrove I had the bright idea to stop in at the Susquehanna Valley Mall instead of going to the Lycoming Mall which might have closed by the time I got there. I went to the f.y.e store in the mall and bought two DVDs; Her 2013 and Colossal 2016. Her is an interesting film about a man’s relationship with his artificial intelligence operating system. When I finally got around to watching this film I found it unbearably sappy. The AI develops feelings with no explanation as to how this was possible. Then it got really weird with chat sex and a surrogate body. Finally the AI leaves him when a technological singularity occurs. It was a classic example of the tendency to anthropomorphize artificial intelligence, total wish fulfillment, humanizing the technology for the sake of the dramatic story. Anyway, my real reason for stopping in Selinsgrove was Texas Roadhouse. My older brother is a big fan of this chain restaurant and he gave me a Texas Roadhouse gift card for my birthday. At Texas Roadhouse I ordered the Half Slab Fall-Off-The-Bone Ribs with two sides; mashed potatoes with gravy and apple sauce. It was really good. I now have a gift card balance of $12.31. 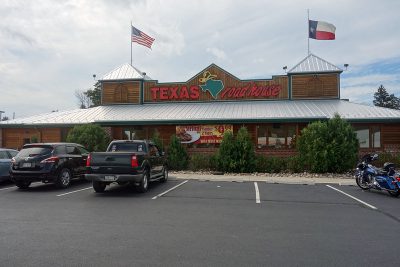 I am now satisfied that I have seen almost everything there is to see in Gettysburg. I probably won’t be going back to Gettysburg until it has faded from my memory enough for another visit to bring back fond memories. I should probably visit Lancaster next since it has been years since I’ve been there. I only spent one day exploring Lancaster.