NYC Trip To See The Play That Goes Wrong

Yesterday I made a trip to New York City to see the Broadway comedy “The Play That Goes Wrong” at the Lyceum Theatre. My first goal on this trip was to visit the Society of Illustrators’ Museum of American Illustration or the Museum of Comic and Cartoon Art (MoCCA) which I did not have time to visit on my previous trip. But while I was in midtown I took photos of the Lyceum Theatre on West 45th Street, the BookOff book store also on West 45th Street, and the Lambs Club restaurant simply because I recently added it to my custom travel guide. 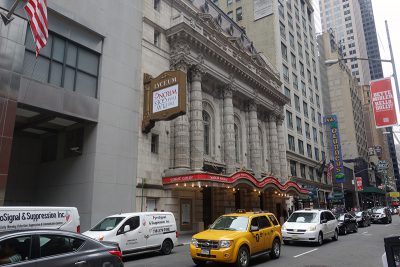 I walked to Bryant Park and entered the 42nd Street-Bryant Park Station to take an uptown F train to the Lexington Avenue – 63rd Street Station. The exit at the Lexington Avenue – 63rd Street Station was so close to the Society of Illustrators entrance that I didn’t even have to look for it and I went there immediately since they seemed to be open. I arrived only ten minutes after they opened. They were showing an exhibit of illustrations of imaginative literature from the Korshak Collection. This included a lot of fantasy illustrations and science fiction magazine cover art. I saw many genuinely fantastic and visionary images which made me glad that I decided to check out this small museum. Unfortunately most books published today are not illustrated but this exhibit reminded me that many old books were lavishly illustrated with incredible pen and ink drawings. It is a shame that this practice went out of style in book publishing. I saw a Frank Frazetta painting for an Edgar Rice Burroughs John Carter of Mars book cover which reminded me of the Frazetta Art Museum. Upstairs I saw an exhibition of original Spider-Man comic book artwork which was probably inspired by the latest Spider-Man film. Even the rest room had some art work including a poster for a Eugene O’Neill play. On the third floor there was a dining room with more Spider-Man comic book artwork. I only spent a half hour at this museum because it was fairly small but I thought it was inspiring and worthwhile. I did not buy anything in the museum bookstore because I didn’t want to carry around a heavy book for the rest of the day. While I was in this area of the Upper East Side I also took photos of the Barbizon Hotel where Sylvia Plath stayed on her trip to New York City and the Park Avenue Armory which is now a non-profit cultural institution. 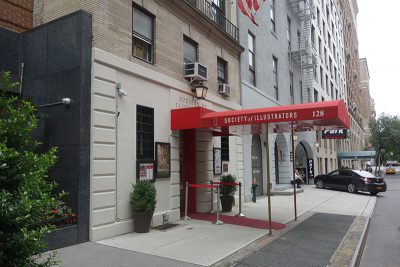 I think I took a F train for the return trip downtown. I also think this counted as a transfer since swiping my Metrocard did not indicate a fare reduction. I got out at the 42nd Street-Bryant Park Station and walked to West 45 Street. Fifth Avenue was blocked off for a huge street fair. I went to the BookOff book store which I added to my custom travel guide in 2013 but had neglected to visit until now. This book store is owned by a Japanese used-media market. They sell lots of Japanese books and anime DVDs. Their selection of used English books wasn’t very good but I did find a copy of Coastal Disturbances: Four Plays by Tina Howe which was on my wish list. I think Tina Howe is now teaching playwriting at Hunter College in New York City. Some of the announcements in the BookOff book store are made in Japanese.

The street fair on Fifth Avenue provided me with a convenient way to get a bite to eat before the play began at 2:00 p.m. I got a can of coke and a Turkish sausage which was like a hot dog in Russian salad (chopped vegetables in mayonnaise). I found a nearby public seating area with tables where I could eat my meal.

At 1:30 p.m. I got in the line at the Lyceum Theatre to see The Play That Goes Wrong. It only cost me $30.00 to see this Broadway play because I bought a seat for the balcony. This proved to be a bit of a mistake since the view of the stage wasn’t good and I couldn’t hear everything too well. The first thing that went wrong was finding my seat, B 108. It took me two tries to find the right seat because they didn’t all have numbers. Getting up to the balcony required climbing a seemingly endless flight of winding stairs. For some reason, nobody was seated in the front row of the balcony, the A seats.

Strangely, what caught my eye was a large Neo-Baroque piece of bronze statuary over the proscenium. This was a statue of three figures, maybe the Gods of Theater. The figures seemed to be based on classical Greek statues. The central figure was definitely Athena Parthenos with her distinctive helmet, spear, and a winged statue of Victory in her right hand. The figure to her left was holding a lyre. This stature loomed large right in front of me but it was buried in the shadows like the forgotten gods of the arts.

The play was a murder mystery in which everything that could go wrong did. The corpse periodically came to life when his hand was stepped on or his body was sat on. Parts of the set fell off the wall and had to be held up by the actors. I think they overdid it a little since something was constantly going wrong. But it was cute when one of the actors would clap with the audience when something went wrong, mistaking this for applause for a good performance. A scene was repeated three times and at one point two actresses were trying to perform the same part at the same time, fighting each other on stage for the spotlight. It was non stop mayhem and definitely one the funniest plays I’ve ever seen. Some of the action actually took place in one of the side balconies which was set up as the theater sound booth. I mistook this as an actual work area of the Lyceum Theatre and was wondering about the Duran Duran posters. Duran Duran was the favorite band of the sound technician for the pretend mystery play. The actor playing this part came up to the balcony and entertained us during intermission with some inspired improvisation. He claimed we could avoid seeing the awful second act by going to another Broadway theater to see the second act of some other show. There were many jokes about this show not being Hamilton. 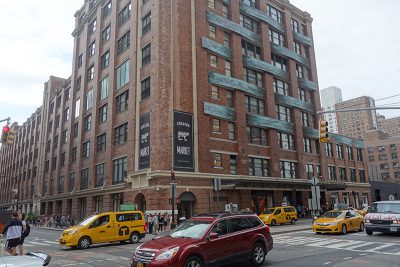 After the show my next goal was to visit the Chelsea Market. Although I’ve seen the Chelsea Market on previous visits and photographed the exterior, for some reason it never occurred to me to actually go inside. But there is a book store in the Chelsea Market and various places to eat. To get there I walked to 42nd Street and entered the subway entrance across from the Port Authority Bus Terminal. I took a downtown C train to the 14th Street Station. I took several photos of the subway entrances on 8th Avenue and West 14th Street because this is an useful stop if you are visiting the High Line or Whitney Museum of American Art. I’ve definitely been there before but did not have any good photos to use in my custom travel guide. I found the Chelsea Market extremely crowded. Eventually I located Posman Books way in the back. This small book store was also extremely crowded. They had a very small selection of plays and poetry. I could not find any books on my shopping list but I finally found the bookshelf for science fiction where I found the book The Player of Games by Iain M. Banks, one of his famous Culture novels. I had diner at Friedman’s Lunch where I ordered a grilled cheese sandwich and a lemonade. The grilled cheese sandwich was one of the best such sandwiches I’ve ever had. I found it on an online menu; Grilled Cheese Sandwich Lunch Bacon, aged Gruyere, white cheddar and caramelized onions on grilled ciabatta. Ciabatta is a form of Italian white bread with large holes. It is crunchier than soft white bread. This was a fancy grilled cheese sandwich!

I had no other plans beyond Chelsea Market so I wandered up Eighth Avenue and located the Atlantic Theater Company and Joyce Theater to take photos of their exteriors. Then I walked all the way uptown along 8th Avenue just to see what was on this one street. I passed Madison Square Garden and eventually found an Art Deco building on 8th Avenue and West 38th Street which I photographed extensively because it is of some architectural interest according to a web site of obscure NYC attractions.

This trip to New York City was more inspiring than my last trip. I needed some inspiration after a disappointing rejection of my AI play which I was so sure would have been accepted. I was considering taking a new track to literary fame, maybe concentrating on the sonnet. But this just brings me back to an essential problem. Nothing I could create would really satisfy me. Getting a sonnet published would strike me as a minor accomplishment, yet how much time would  it take to achieve that? On every trip to New York City I hope to discover something that will change my life but nothing ever does. But maybe reading the books I bought or finding out more about the artists who created the illustrations I saw will lead to something.