Last evening I attended the Gaspipe One-Act Play Festival at the Greenspace Center in Lewisburg. This play festival was offered by the RiverStage Community Theatre. Lewisburg is south of Williamsport on Route 15. It takes around 40 minutes to drive down there. Although this places Lewisburg beyond the Williamsport area, Central Pennsylvania is so sparsely populated that Lewisburg is considered to be a close neighbor so there was heavy involvement with Williamsport’s theater community. In other words, this is the only one-act play festival in the region so I wanted to check it out. 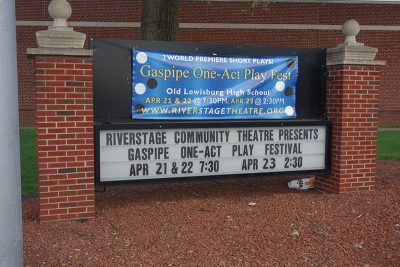 The Greenspace Center is the Old Lewisburg High School which has been re-purposed as a community center. It is located right at the intersection of Route 15 and Market Street so it is easy to find, as you have to pass it to get to the center of the town. 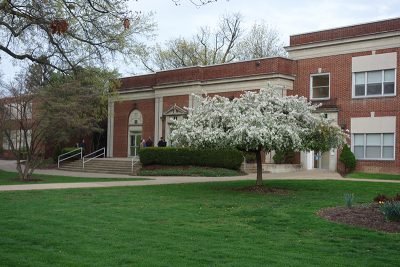 According to the presenters, they only received 20 plays for this festival, a shockingly low number of submissions. From this 20 they selected 7 plays which means you have an almost 50/50 chance of getting your play done if you submit one. I think I will keep that a secret because that is damn good odds! Now ordinarily you would expect to see some really terrible plays given the limited pool of material from which to work with. But surprisingly all seven plays were well written, featured clever ideas, and were well executed in performance.

I will briefly mention what stood out in each play. The (Un)Solvable Crime by Jacob Tanner was a comedy with a dummy corpse that gets manhandled by several amateur detectives. This short play was hysterical. Eurekas by Eoin Carney was another comedy about Greek inventors. The concept was clever. Enter Daisy Buchanan by Patti Cassidy was about Zelda Fitzgerald. This play made clever use of a mirror without any glass and an actress in an elaborate flapper costume. Part of the success of these plays may have been due to the great care in the presentation. The Improvisation Game by Jove Graham was based on a very clever idea of a woman waiting at a bus stop being roped into scene work with a few actors. The helping hands scene was hilarious. Virescent by Rosalind Elise Parenzan featured an actress posing like a statue. They used street performance techniques to make her look just like a statue. I recognized the actor playing the sculptor from The Boatwright. Jesus Feeds The 4,999 by Kay Phillips was hilarious but also a little sacrilegious so I’m surprised they allowed it. Deception, written and directed by Ben Hartman, was a fine example of a farce.

I will definitely submit one of my one act plays to the next Gaspipe One-Act Play Festival. The odds are greatly in my favor and they obviously put a lot of effort into giving each play a well-thought out performance even with their limited resources. There were almost 25 actors performing in these 7 plays which is a lot of people to be involved. I have two new one act plays which have been sent out. Wits In Dialogue was submitted to the Pittsburgh New Works Festival. And Stolen Academic Valor was submitted to Shawnee Playhouse. If either of those plays are rejected I could submit it for consideration by the Gaspipe One-Act Play Festival. Or I could write the play about the shaman entering the life of the office worker, a new play I’ve been thinking about. I’m trying to write more full length plays but writing an one act play is an excellent way to get one started.

I almost forgot to mention that David Mamet is giving an online class on playwriting and I was able to sign up for this class. I think he will have a lot of students and won’t give anyone any individual attention, but this is still a great opportunity. David Mamet is probably the greatest living American playwright. The very first Broadway play I saw was Race at the Ethel Barrymore Theatre.

Before going home I stopped in at Burger King to reward myself for making the effort to attend this event. I probably should have tried one of the restaurants in downtown Lewisburg but it was pretty late at might.