Yesterday I made my first bus trip for 2017 to New York City. My goal was to explore more neighborhoods in Brooklyn. Although I only intended to explore Brooklyn Heights, I had time to wander around Dumbo too. Exploring new territory has deep psychological meaning because it is an exploration of the unknown to discover new resources. This is precisely what my trip accomplished. Your brain rewards you when you travel, expand your horizons, and conquer the unknown. In other words, there is a reason travel is so pleasurable.

My plan was to take the C train to Brooklyn’s High Street station in Brooklyn Heights. I was still able to take the C train from the Times Square station but the C train was rerouted to the F train line for weekend maintenance. So I had to get off the C Train at the York Station. The conductor’s announcements suggested I could transfer to a train for the High Street station but she did not say which train. Eventually I got on an A train and got off at the Jay Street – MetroTech station. That seemed to be as close as I was going to get to Brooklyn Heights. The point is that I need to improve my knowledge of the NYC subway system so I can more effectively handle unexpected service changes.

The MetroTech Center is a large complex of office buildings and skyscrapers in Downtown Brooklyn. I spent a lot of time just figuring out the layout of this urban academic-industrial research park. The subway exit I took brought me out at the Myrtle Promenade where I immediately saw the New York University Tandon School of Engineering and its Balanced Cylinders sculpture. I probably should have spent more time in the MetroTech Center but I was eager to get to the Brooklyn Heights Promenade so I headed west. I knew how to head west because I knew the layout of the MetroTech Center. Along the way I came across the Henry Ward Beecher Monument. I took several photos of this monument and even experimented with my camera’s digital zoom after noticing how some photos I found of the monument used a long-focus lens to make the Manhattan Bridge appear much closer in the background than it should be. But I don’t think digital zoom alone can produce this effect.

Next I walked down Columbus Park to see the Brooklyn Borough Hall. I photographed the Borough Hall Station entrances, the fountain, and the Christopher Columbus Statue in front of the Kings County Supreme Court. There was a farmer’s market taking place in Columbus Park.

After that I walked west on Pierrepont Street and passed the Brooklyn Historical Society and the Arthur Miller Residence at 102 Pierrepont Street. Arthur Miller is not one of my favorite playwrights because I tend to associate him with high school English class, but I was interested in the literary associations of the Brooklyn Heights neighborhood. 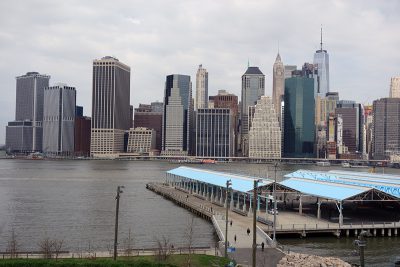 My next goal was to find the Willow Place Chapel which is the home of the Heights Players, a community theater company. I was unable to find any decent photos of this chapel online so I took a few myself. After that I walked to Hicks Street and found the Heights Cafe where I had lunch. I ordered their omelette special which contained caramelized onions, grilled artichokes, and Gruyere cheese. I noticed a few tourists at the next table speaking French. Brooklyn is very popular with the French.

After lunch, my next objective was to find the Truman Capote Residence on Willow Street. This looked much different than it does in the photos I’ve seen. The new owner had its facade covered in brick. I continued to walk around Brooklyn Heights and eventually walked along Henry Street where I located Henry’s End Restaurant, Noodle Pudding, and the Gristedes supermarket.

Since it was now past Noon, I was able to visit the Brooklyn Historical Society which does not open until then. This museum has three floors of exhibits but it is a relatively small museum without much of interest. The Othmer Library wasn’t open but I did look through the glass doors to see the stacks of books. Of the four current exhibits; Until Everyone Has It Made: Jackie Robinson’s Legacy, Truman Capote’s Brooklyn: The Lost Photographs of David Attie, Brooklyn Abolitionists/In Pursuit of Freedom, and The Emancipation Proclamation, I only found the David Attie photos interesting. But this did prompt me to buy the book Brooklyn: A Personal Memoir by Truman Capote with the lost photographs of David Attie in the gift shop. This was a pretty expensive little book, $29.95, but I decided to buy it because it made the perfect souvenir for my trip and I was taking lots of photos of the very same things, only fifty years later.

I didn’t spend much time at the Brooklyn Historical Society. After that I went to the New York Transit Museum which took me pass the Brooklyn Borough Hall again. The New York Transit Museum is located in an abandoned subway station so the entrance is actually a subway entrance. I paid $10.00 for admission. The current exhibits included; Bringing Back the City: Mass Transit Responds to Crisis, Next Stop: Second Avenue Subway, and Deconstruction of the Third Avenue El: Photographs by Sid Kaplan. It was interesting to see some of the equipment corroded by Hurricane Sandy. But what I really enjoyed was the fleet of restored train cars. I walked through quite a few of these old subway cars and each one was like a trip back in time. 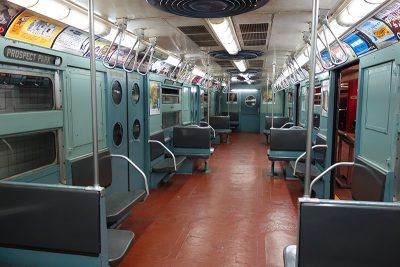 Anyway, after buying those books I had hit all my targets in Brooklyn Heights so I had time to wander around the Dumbo area north of Downtown Brooklyn. I found the pedestrian access entrance to the Brooklyn Bridge which gave me the idea to walk across the Brooklyn Bridge to return to Manhattan. But first I found the Dumbo Heights office complex. This is a very interesting hub of technology companies and startups. I saw where Etsy and WeWork are located in this office complex.

Although I did some updates to my old Dumbo notes, I didn’t actually intend to explore this area so I was poorly prepared. But I did notice considerable changes in the neighborhood which has rapidly gentrified. I’m going to describe what I saw in detail because I need to do some more research on Dumbo.

First I came across Pedro’s Bar and Restaurant on Jay Street. Then I located Berl’s Poetry Shop on Front Street but it appeared to be permanently closed, a victim of book store fate. I also located powerHouse Books which had moved to Adams Street. I was unable to find any photos of its new location so I made sure to take a few photos of its exterior. When I came to the intersection of Front Street and Washington Street I found the streets crowded with people taking photos because this is where you get the iconic view of the Manhattan Bridge. I walked down Washington Street to the Brooklyn Bridge Park and saw Jane’s Carousel and the performing arts venue St. Ann’s Warehouse. This theater moved to the historic Tobacco Warehouse in Brooklyn Bridge Park.  I was particularly interested in looking around its open-air triangle garden. The garden was being used by professional photographers doing photo shoots of models. I saw one man with some sort of lighted box around his head. 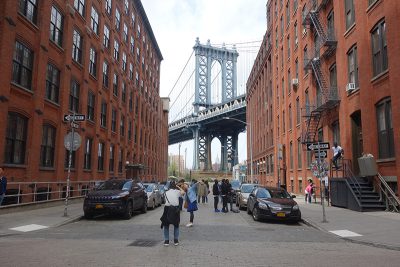 I saw the Brooklyn Ice Cream Factory and at first I did not see a line for ice cream but then I saw its long line so I wasn’t tempted to get any ice cream. Also in this area I saw a Shake Shack, the River Cafe, and Barge Music, a converted coffee barge moored at Fulton Ferry Landing on the East River near the Brooklyn Bridge. I noticed some locks of love on a fence at the landing so I even took a photo of that. On Old Fulton Street I found Juliana’s Pizza and Grimaldi’s Pizzeria but there were long lines for both so I was not tempted to get in line. At this point I was getting pretty tired so I decided to walk across the Brooklyn Bridge to get back to Manhattan. The Brooklyn Bridge was extremely crowded with tourists so you couldn’t even keep out of the bike lane. The last time I walked across the Brooklyn Bridge was on a Sunday morning in 2010 when it was not so crowded. 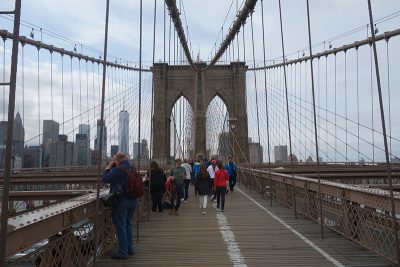 I arrived at City Hall in downtown Manhattan at around 4:00 p.m. and my next goal was to go to the Drama Book Shop before it closed at 6:00 p.m. I took a 4 train from the Brooklyn Bridge – City Hall station to Grand Central where I transferred to the 7 train shuttle to Times Square. This demonstrates how well I’m getting the hang of the subway system. That was a better option than walking all the way west from Grand Central to Times Square. But I need to add all the 7 train stations to my notes. The Times Square exit on West 40th Street brought me very close to the Drama Book Shop so I had no trouble getting there before it closed at 6:00 p.m. I consulted the shopping list on my smartphone and found two books on my list; Sexual Perversity In Chicago and The Duck Variations by David Mamet and Sight Unseen and Other Plays by Donald Margulies.

I didn’t really have any plans for what to do in Manhattan so I walked all the way to West 52nd Street to find Merilu Pizza Al Metro, a small pizzeria that was recommended to me by Reddit users. The restaurant did not have very many tables but I was able to get a seat at the counter. I ordered a slice of white pizza and two cans of soda because I was dehydrated. I’m not sure if I have ever had white pizza before, but it was pretty good and the entire meal only cost me $6.00. This restaurant could serve as my new go to spot for a quick bite but it is a little far from where I would usually be. 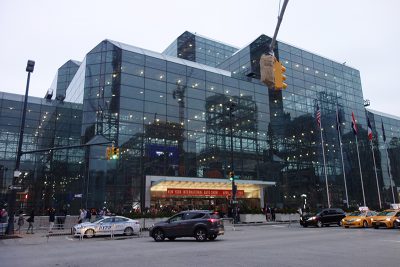 This was my fourth extensive visit to Brooklyn and I’m not sure if I need to explore any more of the borough. There are a few more neighborhoods I could wander around in but I’ve seen plenty already. I think I may stick to Manhattan on my next trip to New York City.