On Sunday my goal was to visit the Getty Center, one of the major art museums in Los Angeles. Getting to the Getty Center was a challenge since it is located far to the west in Brentwood, Los Angeles along the 405 Interstate highway. So I took the Metro Red Line to the 7th Street Metro Center. There I transferred to the upper platform to take the Expo Line. Both the Blue Line and the Expo Line seem to use the same platform so you have to be careful which train you get on. I rode the Expo Line all the way to Expo/Sepulveda Station. Unfortunately, the Metro Rapid Line 734 does not run on weekends so I had to take the Metro Local Line 234. I had to wait in the drizzle for almost an half hour before the bus would leave, but the driver left a few of us passengers on early. It was a very light drizzle so I didn’t really get wet. At the Sepulveda bus stop outside the Getty Center I just followed the other tourists. We took the Getty Tram up the hill.

The Getty Center had many pavilions; the North Pavilion, the East Pavilion, the South Pavilion and the West Pavilion. These were actually buildings and not true pavilions. Each building had several floors so it was difficult to make sure I saw everything but I probably did. My favorite painting was Mischief and Repose – John William Godward 1895. I thought this might be a Pre-Raphaelite painting but according to the Wikipedia article on John William Godward, he was a Neo-Classicist. I bought the book The J. Paul Getty Museum Handbook Of The Collection which features photos of many of the artworks I saw that day. It is always my intention to learn more about the art I see at museums but I must confess that this rarely occurs. I’m pretty familiar with modern art but I have not done much to expand my knowledge. 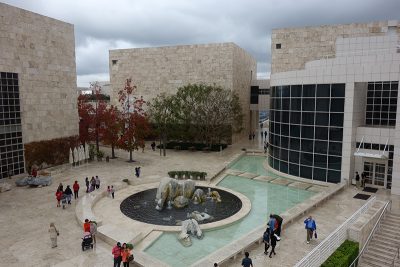 I had lunch at the “Coffee Cart”; a ham sandwich, a parfait, and bottled ice tea for $19.02 at 12:45 p.m. It was raining a bit but the museum provided umbrellas. I found an outdoor table and chair that had been dried off so I could eat my lunch without remaining standing up.

Some of the special exhibits at the Getty Center were; London Calling: Bacon, Freud, Kossoff, Andrews, Auerbach, and Kitaj, Richard Learoyd: In The Studio, Photography in France, 1847-1860, and Greek and Roman Sculpture From The Santa Barbara Museum of Art. 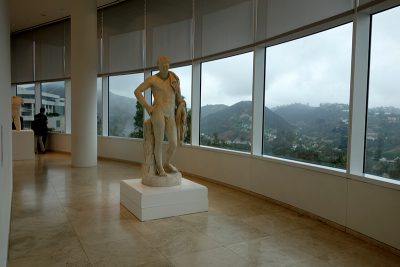 Greek and Roman Sculpture From The Santa Barbara Museum of Art

That evening I began my efforts to have dinner at the local restaurants. That evening I ate at Pitfire Pizza on Lankershim Boulevard. I ordered a Pepperoni Pizza and a lemonade. Their personal pizzas were small enough for me to eat an entire pie. 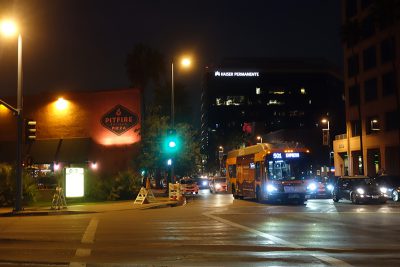 This entry was posted in General, Travel and tagged Pitfire Pizza, The Getty Center. Bookmark the permalink.