For Saturday my goal was to visit the Griffith Observatory. This had to occur on a weekend because the LADOT Observatory Shuttle only runs on the weekends. I took the Metro Red Line to the Vermont / Sunset Station. There I waited for the LADOT Observatory Shuttle. I sent a text message to 41411 to get the arrival time. I’m glad I got data working on my smartphone because it came in handy. When the bus arrived its sign read “Out of Service”. Two other tourists asked me if that was the bus to Griffith Observatory. Eventually the bus changed its sign and we all got on. I used my TAP card and activated a 7 Day Pass for LADOT, not to be confused with the Metro, but this was the only time I used a DASH bus. 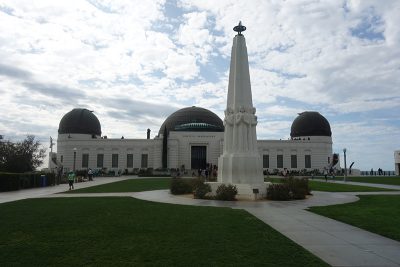 When we got to the Griffith Observatory I walked around the terraces taking photos of the Hollywood sign and downtown Los Angeles which was way off in the distance. Inside I looked at some of the exhibits but made no real attempt to see everything. But I did see the Foucault Pendulum. Downstairs I saw the Gunther Depths of Space Exhibits and used the restroom which was less crowded. After that I went to the Roof Terrace where I saw the 12-inch Zeiss telescope which was not open to the public yet. I spent about an hour at the Griffith Observatory. The LADOT Observatory Shuttle took me back to the Vermont / Sunset Station and didn’t really make any other stops. I saw two British women on the shuttle. I took the Red Line to the Hollywood and Highland Station. I saw a woman with a protest sign featuring religious exhortations. There seemed to be quite a lot of street preachers in Los Angeles, especially around the Red Line North Hollywood Station.

I went to the Hollywood Museum and saw lots of Max Factor makeup, movie star photos, some costumes, and the Dungeon of Doom Exhibit which was like a haunted house. I did see costumes for one movie I have not seen, the Van Helsing film starring Hugh Jackman. I plan to watch several movies based on what I encountered on this trip. I exited the museum through Mel’s Diner which is attached to the Hollywood Museum. 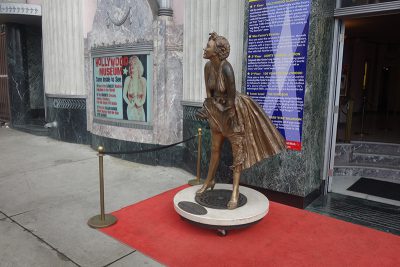 I then walked along Hollywood Boulevard until I reached Pig ‘n Whistle where I decided to have lunch. I had the Pig ‘n Whistle Cobb Salad which was pretty good and glass of coke. I didn’t do a lot of research on restaurants but Pig ‘n Whistle was on my list.

While waiting for my food I reviewed my custom travel guide and noticed that the Psychiatry: An Industry of Death Museum was only two blocks south. So after lunch I walked there. Along the way I saw the Crossroads of the World and two churches; First Baptist Church which had a lot of homeless people camped out on its porch, and the Blessed Sacrament Church. The Psychiatry: An Industry of Death Museum had a guard hovering around the entrance, probably because they get a lot of Scientology protests. When I signed the guestbook I put down “shaman” as my profession as a joke. First I had to watch a short film. There was a greeter and I thought I was going to be indoctrinated but after the film I was free to wander the exhibits on my own. There were many short films to watch but I skipped most of them because they ran on too long. I noticed that they took a dim view of Carl Jung and William James. William James wrote The Varieties of Religious Experience, a classic on comparative religion and mysticism so I’m not sure why they wanted to vilify him. They had added Robin Williams to their exhibit on celebrities who died due to psychiatric medications, a controversial proposition. This museum is run by the Citizens Commission on Human Rights (CCHR), an anti-psychiatry organization. I agree with most of their message but they do give the anti-psychiatry movement a bad name. You can’t challenge psychiatry online without being accused of being a Scientologist. 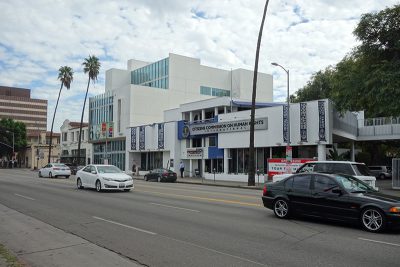 Psychiatry: An Industry of Death Museum

While walking back towards Hollywood Boulevard I came across a theater that was not on my list; The Arena Stage at Theater of Arts. www.toa.edu. This appears to be another acting school. After returning to Hollywood Boulevard I walked to Hollywood and Vine where I took the Metro Local Bus 210 to go south to Santa Monica Boulevard so I could take photos of the Hollywood Theater Row theaters which serve as venues for the Hollywood Fringe Festival. Hollywood Theater Row and the NoHo Arts District are the two centers of fringe theater in Los Angeles, what would be considered Off-Off-Broadway in New York City. The theaters on Hollywood Theater Row are not very well known and I could find few photos of the exteriors online, so I was on a mission to take photos of these theaters even though I was not going to see any shows at the theaters. That might seem a little lame, but the thing about theater is that you have to physically go to the theater so you have to know where it is located and what the place looks like. It bugs me that web sites for small theaters don’t put any decent photos of the exterior online. Rattlestick Playwrights Theater in Greenwich Village is a notoriously hard to find theater with just a red door to indicate its location. When you do find it, you still are not sure you are at the right place.

I walked all the way back to the Hollywood Boulevard from Santa Monica Boulevard because I saw some establishments on the bus ride I wanted to photograph; the Pickford Center for Motion Picture Study and the Ricardo Montalban Theatre which were not in my notes.

When I got back to North Hollywood I walked around the neighborhood a bit and went as far north as Oxnard Street but I didn’t see very many establishments of any interest.

That evening I saw The Play About the Baby by Edward Albee at The Road Theatre Company at 8:00 p.m. This was one of the more professional theaters I saw in North Hollywood. This play had a lot of nudity. I frequently saw a breast and the younger actors raced nude across the stage twice. But the play itself was really stupid and made little sense. Even the play title was stupid. Maybe it would have resonated with me more if I had ever had children. This was the third play I saw that week, which is a lot for one trip. I did not see any plays on the second week of my trip. 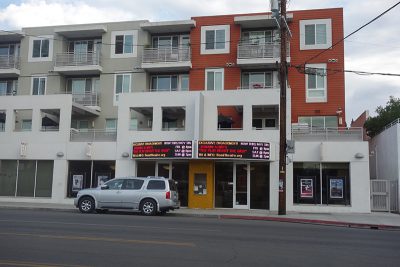 Before going back to hotel I stopped in at the Ralphs grocery store and bought TimTam cookies, a Ralph shopping bag, and a copy of Los Angeles magazine.