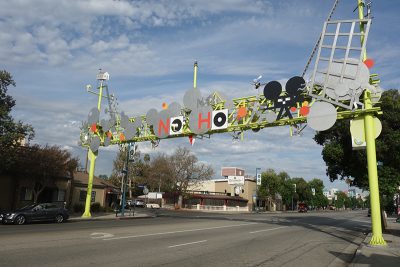 When I got back to the corner of Lankershim Boulevard and Magnolia Boulevard I stopped in at a Starbucks and bought an iced coffee because I was very thirsty. I had worn my light sweater because it was bit chilly in the morning but it quickly got hot and I did not use my sweater for the rest of the trip.

I took the Metro Red Line to the Hollywood Highland Station. That was my first trip on the subway. I used the TAP card which I got through the mail before my trip. On Hollywood Boulevard I saw the El Capitan Theatre, the Dolby Theatre where the Academy Awards is held, the Roosevelt Hotel, the Grauman’s Chinese Theatre, and Madame Tussauds. 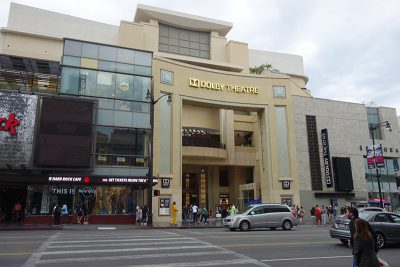 Walking east on Hollywood Boulevard I located the Stella Adler Academy of Acting, a small acting school and theater that most tourists probably don’t notice, the Museum of Broken Relationships, the Grauman’s Egyptian Theatre, the Musso and Frank Grill restaurant, and the Hollywood Pacific Theatre (which looked abandoned). I even came across the Dolores Del Rio Mural which I wasn’t looking to find. 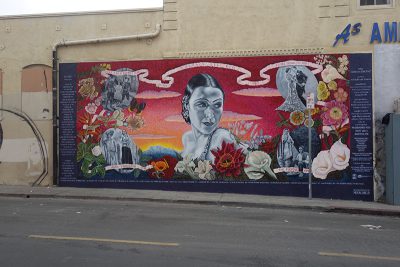 Eventually I walked back to the Hollywood and Highland Center and took the escalator up to the courtyard where I found some more steps to climb to take photos of the Hollywood sign. This was my first good look at the famous Hollywood sign. I found a secluded area of the observation floor where I could take great photos of the Hollywood First National Bank, a distinctive Art Deco tower which isn’t currently being used for much, but it is a famous landmark. It was a bit cloudy and overcast that day so my photos were not not great but I had plenty of opportunity to take better photos later on during my trip.

I then entered the Hollywood Highland Station and took the Red Line for one more stop to the Hollywood / Vine Station. Later on I figured out that it was preferable to just walk along Hollywood Boulevard to Vine Street since there are plenty of things to see along the way. At the Hollywood / Vine Station I saw the movie projectors that are used to decorate the station. Naturally I saw the Pantages Theatre across the street after exiting the metro station and I saw the Capital Records Tower and the Redbury Hotel where I had considered staying. Walking further east on Hollywood Boulevard I located the Fonda Theatre, one of the few music clubs I saw since I did make it out to the Sunset Strip.

From there I walked south to Sunset Boulevard where I saw the Hollywood Palladium, the Cinerama Dome, and Amoeba Music. I wasn’t planning on visiting Amoeba Music but since I happened to have found it I decided to do some shopping. I was carrying a small shoulder bag but they waved me through since it was too small to use for stealing. I bought three CDs at Amoeba Music; Covenant’s Europa, Bjork’s The Music from Drawing Restraint 9, and Die Form’s In Human. 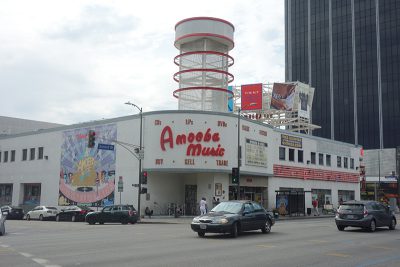 After buying the CDs I returned to the Hollywood / Vine Station and took the Red Line back to the North Hollywood Station. I walked to Magnolia Boulevard where I had lunch at El Pollo Loco, a Mexican chicken fast food chain. The ordering process was very complicated and annoying since they could barely understand me. I had to select two sides so I picked mashed potatoes with gravy and macaroni and cheese. I ordered the three piece combo so then I had to specify two breasts and one wing which proved to be very tiny. Then they asked me what kind of tortilla I wanted because any Mexican meal must include a tortilla even if there is no need for one. After eating I went to the Ralphs grocery store nearby and bought a 8 pack of Gatorade which I had to carry without a bag. I found lots of murals on the Chandler Bikeway after walking north on Cahuenga Boulevard to get back to my hotel.

After returning to the hotel I went out again and eventually went to the The Iliad Bookshop where I bought three books; Other Desert Cities by Jon Robin Baitz, Lithium For Medea by Kate Braverman, and The Designated Mourner by Wallace Shawn. All of these books were on my Amazon wish list. I’m mostly reading plays now and a lot of the book stores in Los Angeles are well stocked with plays because there are so many actors in the city.

Finally I had fish and chips at Tom’s Restaurant. It was three pieces of very hot, deep fried fish and a lot of fries with just a little cup of ketchup. At least they refilled my coke.

This was a long day that gave me my first look at Hollywood Boulevard. I also explored the North Hollywood neighborhood and made use of the local resources. And I did some shopping for CDs and books I was searching for. All in all it was a very productive day.