I began this year’s major vacation in Los Angeles on October 22, 2016. This was the day after my birthday and I almost had to cancel my trip because there was some flash flooding in Lycoming County on my birthday. Fortunately the travel gods smiled upon me. Not only did I avoid any flooding but my entire trip went perfectly.

The first day of my vacation was spent flying to Los Angeles. It took approximately an hour and a half to fly to Charlotte NC from Harrisburg PA and then four hours to fly from Charlotte NC to Los Angeles. I arrived at LAX around 4:25 p.m. Pacific Time and then it took an hour for the taxi to take me to my hotel in North Hollywood. I should have tried to book a flight to the Burbank Bob Hope Airport because that is much closer to North Hollywood. I would have saved a lot of money on the taxi. The taxi from LAX to North Hollywood cost me $97.58. Fortunately, I saved money by not using taxis or Uber during my trip except for the trips between the hotel and the airport since I had luggage.

I did not have time to do much during my first evening in Los Angeles because it quickly began to get dark. But I did manage to stroll down Lankershim Boulevard to see many North Hollywood establishments like the Federal Bar, El Portal Theatre, Vicious Dogs, the Raven Playhouse, the Academy of Television Arts and Sciences, and Pitfire Pizza.

I also walked east on West Magnolia Boulevard and located the NoHo Arts Center, the Sherry Theater, Walgreens, Ralphs (grocery store), the Road Theatre Company, and the Actors Forum Theatre. One of the reasons I chose to stay in North Hollywood is because there are many small theaters located in the NoHo Arts District. The area appears to have gentrified after the Metro Red Line North Hollywood Station was built. There are many office buildings and condominiums in North Hollywood but the surrounding neighborhoods still retain some Latino presence. 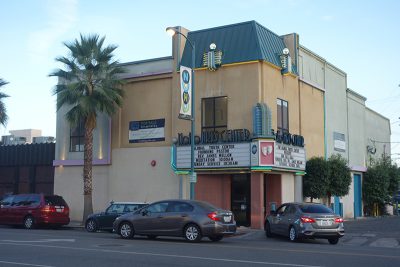 From West Magnolia Boulevard I walked north on Cahuenga Boulevard and found the Iliad Bookshop but it was close to its closing time so I did not go in. I had dinner at Tom’s Family Restaurant on the corner of Burbank Boulevard and Cahuenga Boulevard. This became my favorite place to eat but I did not walk that far very often. I ordered a cheeseburger and a milk shake. The cheeseburger was very large and really good. The milk shake was a little too thick. Tom’s Family Restaurant was a good, old-fashioned diner with leather booths. 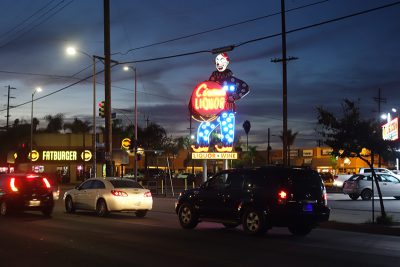 After eating I walked west along Burbank Boulevard back to my hotel, Holiday Inn Express North Hollywood. Along the way I passed the Lonny Chapman Group Repertory Theatre and the Circus Liquor neon sign which is a local landmark. The neighborhood around my hotel was not very glamorous. There wasn’t much along Burbank Boulevard except for garages, auto part stores, and various other establishments devoted to auto maintenance.