Yesterday I went to New York City to see my favorite play “Long Day’s Journey Into Night” by Eugene O’Neill. This was my first bus trip to New York City with my new camera, a SONY CyberShot DSC-RX100, which takes much better photos than my old Fujifilm FinePix JX400.

As usual I took a Susquehanna Trailways bus to New York City and on this trip I sat right next to the escort with a good view out the driver’s window. The bus is now dropping passengers off on West 49th Street and 8th Avenue because the Times Square Church no longer allows them to drop off passengers there. This puts you near the Eugene O’Neill Theater which was appropriate for this trip since I was seeing one of his plays, although not at that theater.

The play did not begin until 1:00 p.m. and we reached New York City by 10:00 a.m. so I spent a few hours in Times Square getting some high quality photos with my high quality digital camera. One of the establishments I made sure to photograph was the Times Square Arts Center which is a shabby arts center that rents black box theaters for play festivals. One of those play festivals recently posted a call for submissions on Reddit. All of the play festivals in New York City require the playwright to produce his own show in exchange for the exposure, but most theater professionals seem to regard this as a poor opportunity and a bit exploitative. In any event, I wanted to document where the festival was held.

I walked down to West 37th Street to visit Magazine Cafe. This store should not have been open until 1:00 p.m. on Saturday, according to my notes, but they were open so I went in and bought a copy of the French literary magazine, Le Magazine Littéraire. New York City is one of the few cities in the United States were you can find books and magazines in foreign languages so I always try to buy a few on a trip. This supports my future travel plans. 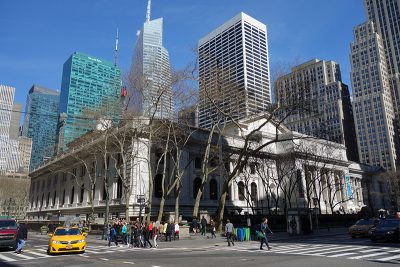 Next I went to my favorite book store, the Drama Book Shop, which only sells plays and books on the theater or acting. I go there so often that my Acting Edition Club discount card has seven stamps. This time I bought The Pillowman by Martin McDonagh, the play I saw in San Francisco, Detroit by Lisa D’Amour, and The Night Alive and Other Plays by Conor McPherson.

I brought my pedometer on this trip and it recorded that I walked 19,805 steps which is approximately 10 miles! I did not use the subway on this trip. I walked everywhere since I was keeping to the midtown area. From the Drama Book Shop I walked a short distance to West 42nd Street and made sure to photograph the exterior of the theater where I was going to see the play, the American Airlines Theater. This is located on the flashiest part of 42nd Street so I took plenty of photos of other establishments in the vicinity. 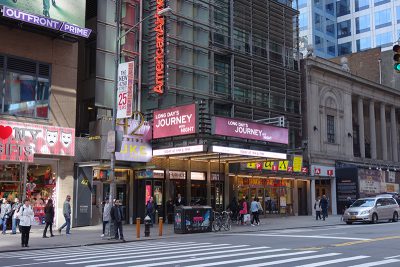 It was then close to 11:30 a.m. so I walked further up town to West 45th Street and 9th Avenue to find my new favorite restaurant, Obao. This restaurant opens at 11:30 a.m. so I was the second customer to show up. I ordered the same thing I ordered last time; the Crispy Pork Belly, the Spare Rib on Sugarcane Skewer, and Chai Tea. This meal only costs around $25.00 which is half of what I usually pay for a meal in New York City, $50.00 for something that isn’t all that special. I’m getting tired of feeling cheated so I’m feeling less adventurous concerning restaurants.

Lunch was over in less than half an hour so I had plenty of time to walk back to West 42nd Street and the American Airlines Theater. This was the major goal of my trip so I did not want to be late and miss the show. Once inside the theater I took the elevator to the fifth floor to use the restroom. The play ran for three and a half hours so I wanted to be sure I could last that long without a restroom break. When I got up there I found a lecture on the play taking place in a ballroom so I stood around and listened to that before the show began. My seat was in the rear mezzanine so I had to watch the play from above, like a god. Since the play featured several movie stars I would have preferred a front row seat where I could get a good look at them, but this was the best seat I could get. It wasn’t so bad. I had a good view of the chandelier, various spotlights, the balconies, and a god-like view of the stage so I was very aware of the theater surroundings.

It was a real thrill to see Long Day’s Journey Into Night in New York City. This is my favorite play by my favorite playwright although I might rank Hamlet a bit higher. Although the Roundabout Theatre Company and the American Airlines Theater is technically Off-Broadway, this is as close to Broadway as this play is likely to get. You could not ask for a better cast. The highly respected Irish actor Gabriel Byrne played James Tyrone and was perfect for the part. The Hollywood film star Jessica Lange played Mary Tyrone. I remember her most from the 1977 film King Kong although she probably doesn’t want to be remembered for that. But what is larger than life than King Kong? Mary Tyrone does not equal King Kong in stature. And Michael Shannon played James Tyrone, Jr. He also played General Zod in the superhero film Man of Steel.

Unfortunately, the most remarkable thing about this play was the astonishing tone deafness of the audience. Long Day’s Journey Into Night is a searing tragedy about four characters in torment. But this audience was laughing throughout the entire play! They were so out of touch with the intended mood of the play that you could not help noticing it, and it became the most remarkable thing about the whole experience. Now there is some comedy in the play and a little witty dialogue so I did not find it remarkable when the audience chuckled at the maid Cathleen and the business with the bottle. But the audience continued to laugh uproariously, giggle, chuckle, and titter every chance they could get.  Towards the end of the play I found myself just waiting to see what lines would get a laugh next.

My first clue that something was amiss was when Nietzsche got a laugh. Every mention of Nietzsche set the audience to laughing. This really puzzled me. What’s so funny about Nietzsche? Am I missing something here? Then the audience began laughing at lines you aren’t supposed to find that funny. For example, when Edmund asks his father, “Did Doc Hardy tell you I was going to die?” the audience howled in laughter, presumably because it sounds like a reason for Tyrone to give him a whole ten dollars. Sometimes I could see the audience’s point in finding something funny, like the dim, tiny little light that Tyrone turns on after relenting on the electric bill. But at other times my jaw dropped at astonishment at what the audience choose to laugh at. For example, when James tells Edmund, “Hell, you’re more than my brother. I made you! You’re my Frankenstein!” the audience laughed at the mention of Frankenstein. My reaction was, seriously? What the hell is wrong with you people? You are going to laugh at that? This is one of the biggest moments in the play and it is not intended to get a laugh!

This audience seemed to be just waiting to find the next big laugh and it had an evil genius in finding laughs within the play. For example, Mary Tyrone excuses her husband’s behavior by mentioning his ignorance, “Please don’t think I blame your father, Edmund. He didn’t know any better. He never went to school after he was ten. His people were the most ignorant kind of poverty-stricken Irish.” This got a big laugh from the audience which obviously thought this was meant to be some kind of insult. Two more examples of inappropriate laughter were when Tyrone accidentally reminds Edmund of his consumption and Edmund accidentally reminds Tyrone of Mary’s addition to morphine. Both slip ups got big laughs from the audience.

How can one explain this tone deaf audience? Maybe they were all tourists. Maybe they knew nothing about Eugene O’Neill or this play and were just expecting a Broadway play. In that case, they were obligingly willing to chuckle at every display of wit and just showed poor judgment in finding the humor in the play. Still, these people must have a very poor sense of tragedy. They have no tragic sensibility!

There was one 15 minute intermission which was not enough time to use the restroom. In the lobby, I bought a critical edition of the play with a foreword by Jessica Lange. Apparently she has played the role of Mary Tyrone previously in London. I saw this play in London at the Apollo Theater in 2012. Laurie Metcalf played Mary Tyrone in that production. It was equally thrilling to see my favorite play during my only trip to London. I would also like to note that the stage set was awesome and featured a shining body of water visible through the house windows which managed to suggest the lake. They also used fog to make some of the scenes especially eerie. The dining room also filled with fog. That may have been unintentional but it looked very creepy and gave the play a haunting quality. At the end of the play, during Mary Tyrone’s final scene, the rest of the cast was frozen around the table in a tragic tableau. I should mention that the performance was flawless and the actors were obviously not playing the scenes for laughs. I think the audience was entirely to blame for refusing to take the play seriously.

When the play ended it was almost 5:00 p.m. so I did not have time to visit the Paley Center for Media which closed at 6:00 p.m. Since I was psyched by the play I spent the rest of my time taking photos of the various Broadway theaters. My new camera meant I would get some of my best photos ever. I especially wanted photos of the Helen Hayes Theatre which was showing The Humans by Stephen Karam and the New Dramatists, both on West 44th Street. Eventually I walked to West 52nd Street to locate the Paley Center for Media which I may visit on a future trip. On the Avenue of the Americas (Sixth Avenue), I found a Barilla Restaurant where I ordered a Rustica pizza and a small can of Sprite. From there I returned to Times Square and made my way to West 49th Street and 8th Avenue to wait for the bus home. 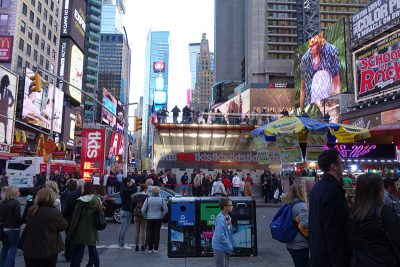 This trip really served to refresh my enthusiasm for the theater and playwriting. I’ve been reading some theater textbooks lately but that only serves to bore me. I’ve been thinking about how I can keep my interest at a very high level. My idea is that I have to start thinking of the theater as sacred to invest it with greater significance. Right now my major goal should be to complete some worthwhile full length plays. Once that is done I can put my mind to the problem of getting them produced in a major theater. There is really no point in complaining about your prospects until you have something to promote.

My next trip to New York City will be on May 28 when I will see Daphne’s Dive by Quiara Alegrí­a Hudes at the Signature Theatre.