First we had a tour of the Moravian Pottery and Tile Works which was an interesting look at pre-industrial manufacturing of tiles. There were some tiles available for sale in the gift shop but I didn’t think they made for an attractive knick knack. I’m not really that interested in tiles or pottery.

We had to wait an hour in the bus before our Fonthill Castle tour. Since we were a large group, only thirteen people could go a tour but several groups were being lead through the castle simultaneously. We just had to stay out of each other’s way. Fonthill Castle is an amazing mansion. It is an unique mansion made out of poured-in-place concrete. Going through the mansion was like walking through a weird, spooky funhouse filled with old prints and artifacts. It was also a little like an old hobbit house. 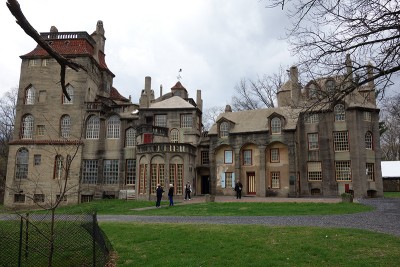 After the Fonthill Castle tour we went to Peddler’s Village. I’ve been there once before on a rare shopping trip which included Rice’s Market. Unfortunately, the Canterbury Tales Forever book store I remembered was gone. I immediately had lunch at Hart’s Taven where I ordered a coke and a kielbasa sandwich with French fries. That meal only cost me $12.16 and I left $12.25 for a 9 cent tip. I didn’t tip more because I was cheated out of change when I ordered breakfast at Burger King in the Hickory Run Service Plaza. They didn’t even give me the sausage in my sausage croissant! That was enough to piss me off so I decided to pay it forward. I’m getting a little tired of being cheated at every turn lately so now I’m looking for ways to pass along the screwing.

Although the book store was gone, I did manage to find a book to buy at My Favorite Shoppe which was selling a few expensive first editions. I bought Dan Wakefield’s New York In The 50s. This book interested me because I’m currently reading a history book on Greenwich Village which probably covers some of the same material. I also own Dan Wakefield’s novel Selling Out which I still have to read. That novel is about a writer who goes to Los Angeles to write for television.

We spent several hours at Peddler’s Village which was way too long for me because I didn’t want to do a lot of shopping in gift stores. I did look around many gift stores which I treated as pop art galleries. That reminds me, I did buy a small print of a painting of the Bucks County Playhouse. It only cost $3.50 and it is a rare example of artwork that uses the theater as its subject matter. There actually is a Bucks County Playhouse and I should add it to my travel guide. 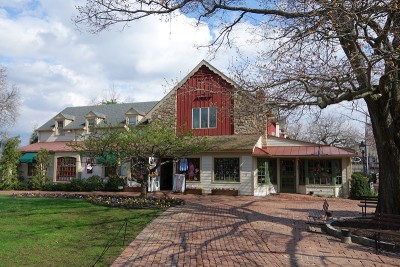