I spent Halloween in New York City. This was a typical trip to New York City since I didn’t do anything related to Halloween. As usual, I used Susquehanna Trailways to make this trip since that is still the most economical option. It had been over a year since my last trip to NYC so there were a few changes, mostly more skyscrapers.

The first thing I did on the trip was walk down to 42nd Street and then I walked east. This took me pass some sights I’ve missed on previous trips since I don’t usually go too far east of midtown. I got some great photos of the Grand Central Terminal, the MetLife Building, and the Chrysler Building. Then I came across some new landmarks for me like the Daily News Building, Tudor City, and finally the United Nations. From the United Nations I walked north to find Dag Hammarskjold Plaza and the Japan Society building. This walk served to improve my knowledge of Manhattan’s geography since it illustrates how 42nd Street theaters, Bryant Park, the Grand Central Terminal, the Chrysler Building, and the United Nations are all among the same street. 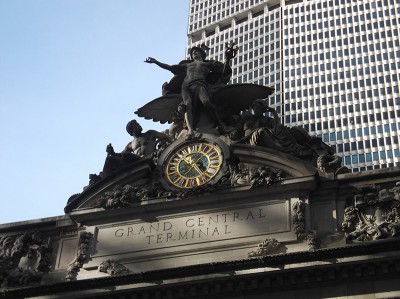 After that I walked north to 51st Street and then west to St. Patrick’s Cathedral. I was looking for the Netherlands Club of New York but I got distracted by St. Patrick’s Cathedral and the Atlas stature. I think I took some of my best photos of the Atlas stature including an extreme close-up. While I was in the area, I also photographed Radio City Music Hall, Rockefeller Center including the gold stature of Prometheus in the sunken plaza (which was converted into an ice skating rink already), the Top of the Rock observation deck entrance, and the Time Life plaza which I’ve recently seen in the film, The Secret Life of Walter Mitty (2013) starring Ben Stiller. At this point I used my extensive research on New York City to good effect. I needed a bathroom and I knew that one of the best places to find a restroom is on the lower concourse of the Rockefeller Center. They have quite a few shops down there. It is like a shopping mall. The men’s restroom was very crowded since this is not a big secret.

Although I had a matinee show to see at 2:00 p.m. it was only noon so I decided to use the subway to head downtown and locate a few Off-Broadway theaters in NoHo, North of Houston. This turned out to be a mistake since I got hopelessly lost downtown. But first I should mention that I took the 1 Broadway – Seventh Avenue Local at 50th Street. This station is located in a sunken plaza. There was a lot of construction in the sunken plaza as the Mars 2112 restaurant is long gone. This is right across from the Winter Garden theater which is now showing School Of Rock and not Rocky. The 1 Broadway did not go all the way downtown due to some construction. I had to transfer to a 2 Seventh Avenue Express train and got off at Houston Street.

It was at Houston Street that I got lost and wandered into Greenwich Village. So now I will try to figure out where I went wrong. Let’s see, I walked towards Greenwich Street. That was the wrong direction! Then I found the Cherry Lane Theater to the north. I found Bleecker Street which was encouraging because some of my targets were on that street, but again I went in the wrong direction. I walked north on Bleecker Street until I came across Abingdon Square Park. This was interesting because I’ve read a play by Maria Irene Fornes entitled Abingdon Square, so I did want to visit this park. After that I walked even further north to find Chelsea Market. At this point I was panicking so I found the nearest subway on 8th Avenue and took an E train back uptown to 42nd Street (Times Square). Unfortunately my custom travel guide was not handy in this situation since the Google Maps I embedded in my topic pages did not show enough of the streets in the neighborhood to orient myself. What I will have to do is add some larger maps and some topics on the major cross streets like the Bowery and Houston Street. Then I’ll also need some notes on how to find the nearest subway station.

The play I saw was Travels with My Aunt at the Clurman, one of the six theaters of Theater Row. I wasn’t particularly interested in this show but I was curious about Theater Row which I’ve walked pass on many other trips. I discovered that these six theaters do not have individual entrances onto the street. Instead you have to enter the lobby with the ticket window and wait there for the shows to start. Then you are let in. I had to go downstairs to reach the Clurman theater. So these six theaters are not actually in a row. That is an illusion created by the neon signs outside! This show was put on by the Keen Company, one of the eleven resident theaters of Theater Row.

Travels with My Aunt was a comedy based on a novel by Graham Greene. The show featured four actors all dressed in identical costumes. They took turns playing the hero and all the other characters. It was slightly confusing. I thought it was an annoying example of actor virtuosity. Without costume changes or clearly defined roles, the illusion of the story was totally lost. Having four identically dressed actors randomly assuming one role was particularly annoying. At least the role of Aunt Augusta was consistently played by one actor in high camp, but he was wearing a suit and would sometimes become the dull Henry. I love travel and the story was about travel so I could appreciate that aspect of the play. I almost fell asleep during the performance but that is because I had to get up at 4:00 a.m. to catch the 5:30 a.m. bus to New York City. Once you enter a darkened theater you just want to sleep if you got up that early. This has been a problem on previous trips. 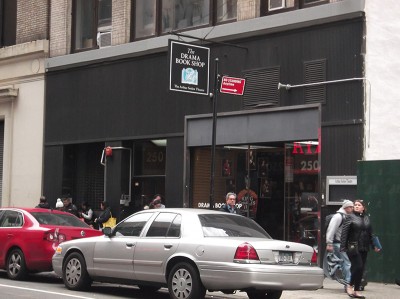 After the show I rushed to the Drama Book Shop to do some shopping. I had a long shopping list of plays to find. Unfortunately I only found three things on my list; Pocatello by Samuel D. Hunter, The Humans by Stephen Karam, and I Hate Hamlet by Paul Rudnick. Samuel D. Hunter is a great playwright. His play, The Whale, is one of the great contemporary tragedies. I Hate Hamlet interested me because one of the characters is the ghost of John Barrymore. The Barrymore awards in the Philadelphia theater community were named in honor of John Barrymore. I should buy a biography of John Barrymore. I keep a list of all the plays I’ve seen and apparently I’ve seen I Hate Hamlet but I don’t remember a thing about it. Stephen Karam grew up in Scranton PA and has become a successful playwright in New York City. He must be the most successful playwright to have come from Scranton since Jason Miller. The Humans is actually playing at the Harold and Miriam Steinberg Center for Theatre and I could have seen it on this trip since there was a Saturday afternoon matinee. Unfortunately, I neglected to check the Roundabout Theatre Company web site when searching for a play to see. However, I did walk pass the Harold and Miriam Steinberg Center for Theatre and took several photos of the theater windows advertising this play. 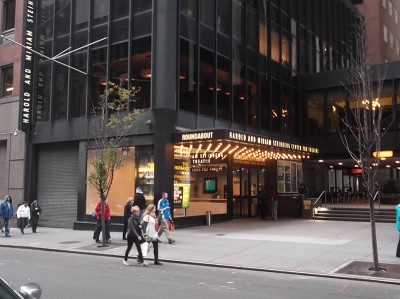 When I left the Drama Book Shop my next goal was to have some dinner. I wanted to try some Brazilian cuisine so I walked to  West 46th Street which is known as Little Brazil Street since there are a few Brazilian restaurants along this street. If you are into international travel, you will love the international restaurant scene in New York City which at least allows you to sample the cuisine of any country you are interested in, except the Netherlands, since there is no genuine Dutch restaurant in NYC. I selected Ipanema Restaurant for dinner but they had moved so it was a little hard to find. Fortunately they did not move far but the exterior was different. I ordered the Bitoque, aged angus steak in garlic and wine sauce topped with fried egg with fried potatoes. I saw a photo of this dish online and it looked delicious. It was delicious but more expensive than the online menu listed price. I also had a half glass of red wine but they did not let me pick the wine. Ipanema Restaurant is a nice restaurant with many well-dressed waiters who seemed to always be on the prowl to pounce at the first sign of an empty plate or used utensil. The service was almost too attentive, like having five bored waiters serving you.

After dinner I did my usual routine of wandering around Times Square and the theater district until it was time to get on the bus home. I thought about the play I’m writing. This play will be one of the most important plays I intend to write. It has a great concept and only I can write this play. I don’t have a good title for it yet, but it is essentially the shaman play since it will be about how I think shamanism relates to the psyche, the theater, and creativity. It is a fantastic concept and should be very interesting as long as I write it well. It is really hard to predict how it will be received though. Maybe I should be careful what I wish for, since this play might do better than I expect! It is important to remember that the American theater is not a monolithic institution. There are hundreds of theaters which are under individual artistic direction. So it is a mistake to be too pessimistic.

I have a few more details to record. First, I forgot to mention that I went to Kinokuniya Bookstore across from Bryant Park and bought a Blu-Ray DVD, The Ballad Of Narayama. The Susquehanna Trailways bus left us off at 49th Street and 8th Avenue near the Eugene O’Neill Theatre which is still showing The Book of Mormon.