Sunday was my last day in Philadelphia for this trip. On previous trips, I high tailed it out of Philadelphia early Sunday morning to beat the traffic on the Schuylkill Expressway but I was determined to get the maximum number of hours in the city on this trip. This was a very expensive trip and I wanted to get my money’s worth.

The first thing I did was check out of the hotel at 8:00 a.m. I took my luggage to my car in the underground garage but I did not leave. I repeated my routine from the previous morning and walked along Race Street to Chinatown. I spent considerable more time exploring Chinatown which was practically deserted. I photographed as many establishments as I could given the early morning lighting. I can’t get a good photo with the sun shining right into the lens. After awhile I walked to Walnut Street and found the Forrest Theater and the Walnut Street Theater which I photographed extensively. Then I walked to Washington Square to photograph the Tomb of the Unknown Revolutionary War Soldier. None of this was necessary since I’ve taken photos of these sights on previous trips but I had to kill time until the Reading Terminal Market opened at 9:00 a.m.

At Reading Terminal Market I decided to have breakfast at Pearl’s Oyster Bar instead of at the Down Home Diner. Pearl’s Oyster Bar was crowded but I managed to get a seat at the long counter. I ordered the Creme Brule French Toast, although it may have been named a little different, which featured vanilla custard brioche, berry compote, creme anglaise, Pennsylvania maple syrup, berries, and fresh whipped cream. It was really delicious! All of their breakfast menu items looked scrumptious with large portions. Fortunately I was very hungry and was able to eat all of my french toast. 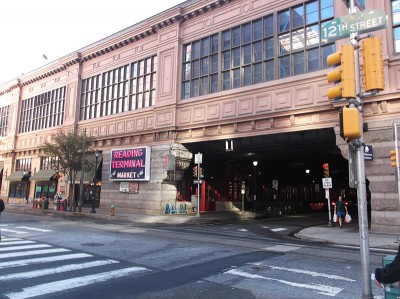 After breakfast I walked along the Avenue of the Arts yet again and made my way to the Rosenbach Museum And Library which was to be my last museum to see in Philadelphia. Unfortunately they did not open until noon so I had to go to Rittenhouse Square to sit around on park benches for an hour. I did take many photos of the park in bright sunshine. Eventually I was able to return to Rosenbach Museum And Library which had a few tourists already waiting to get. 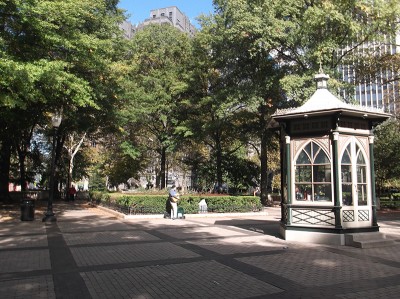 Rosenbach Museum And Library proved to be a worthwhile conclusion to my cultural trip. The Rosenbach brothers were collectors and dealers of rare books so their museum was a treasure trove of rare books. First I went on a tour of the town house which is filled with antiques, bookcases, and objects of art. I saw the the manuscript and typescript for Under Milk Wood by Dylan Thomas. I also saw a drawing by William Blake, The Number of the Beast is 666. This was the biggest thrill for me since I am intrigued by this visionary artist and poet. I’ve read several biographies of William Blake and he is frequently referenced in the books I read on psychedelics and altered states of consciousness. The Rosenbach Museum And Library also has a recreation of Marianne Moore’s living room just as she lived in it, but unfortunately that was closed for renovations. 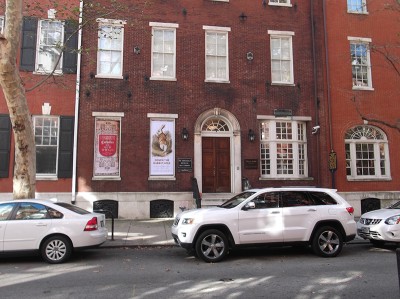 Before I left I saw the Down the Rabbit Hole special exhibit, Celebrating 150 Years of Alice in Wonderland, which included a pop-up display of the original manuscript.

I walked back to my hotel and managed to make my way out of the underground parking garage. I navigated the Schuylkill Expressway without incident but it was very crowded and slow going. On Interstate 80 in the Poconos it actually began snowing. It was like a blizzard even though the sun was still shining. That was quite unexpected!

My trip to Philadelphia was a great success! It was quite the cultural experience. I bought a lot of books which will take me years to read. I haven’t even read books I bought on previous trips to Philadelphia. Was it really necessary to travel that far for a great cultural experience? Williamsport has three theaters, which is a lot for a city this size, but the quality of their productions leaves a lot to be desired. The Community Arts Center never books anything with even the slightest cultural value. The Community Theatre League has been filling their season with comedies and musicals. The Lycoming College Theatre Department is doing Cabaret in November so I suppose that will be worthwhile. I just wish this region saw Philadelphia as a cultural resource so there would be more bus trips to the big city. Driving down there myself is a big hassle.

My next exciting adventure will be a trip to New York City on Halloween. I have not decided on what to do there, but it will probably be more theater.