The goals for my second day in Philadelphia were the Barnes Foundation museum, the Eastern State Penitentiary, and the Wilma Theater. But first I had to have breakfast. I was starving since I did not eat diner the previous night. I walked along Race Street to the Reading Terminal Market. Before I reached the market, I passed the Hahnemann University Hospital which had a huge mural and the Church of Scientology. I had breakfast at the Down Home Diner in the Reading Terminal Market. I ordered the Country Scram, barnyard fresh eggs scrambled with salt-cured ham, onions and mushrooms. I did not think it was very good. Maybe that is why I was the only person having breakfast there. I also had a cup of coffee because I was suffering from caffeine withdrawal.

I had a ticket for the Barnes Foundation museum which I bought online but it was for 10:30 a.m. so I had to find something to do until then. I decided to walk around Center City and attempt to locate a few more theaters which are not located on Broad Street. First I looked for the Interact Theatre Company which I read about often in The Philadelphia Connection: Conversations with Playwrights because this theater encourages new work. I did walk pass the Joseph Fox Bookshop and that was the only book store I resisted during my trip because I did not want to carry a package into the Barnes Foundation museum. Eventually I had to cut short my search for theaters in order to make it to the Barnes Foundation on time. The Barnes Foundation museum is now located on the Benjamin Franklin Parkway with the rest of the museums. There was a huge controversy about moving the Barnes Collection. It was against the wishes of Albert C. Barnes. There is a book about the controversy which I own but I have not read it yet. The Barnes Collection is a great museum of modern art with works by Renoir, Cézanne, Matisse, Manet, Degas, Seurat, Prendergrast, Titian and Picasso. I even saw a few paintings by the metaphysical painter Giorgio de Chirico, one of my favorite artists. If you love modern art, you definitely need to visit the Barnes Foundation museum.  I wish I had seen the collection in its original home but it slipped my mind since the museum was then located on the outskirts of the city.

I used a museum map to make sure I went into every room of the museum. The organization of the art work was curious, since there were Japanese art placed next to modern art placed next to African artwork. After I was sure I saw everything I made my way to the Lower Level to use the restroom and visit the museum store. I bought a massive book, Masterworks of the Barnes, for $45.00 because they did not have a smaller guide book to the museum. But I did see a lot of great paintings that I would want to know more about. I did not use an audio guide during my visit. 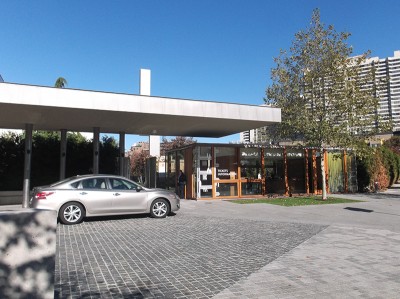 I had to return to my hotel with that book since it was too heavy to carry around. In fact, I took all the books I had bought and put them in my car in the garage. I could buy as many books as I liked since they did not have to fit in my luggage! It did take me quite a while to locate my car since I was not sure which level I parked in.

Before proceeding to the Eastern State Penitentiary, I went to the see some public art which was located very close to my hotel. I found the sculpture, Freedom by Zenos Frudakis, outside the Philadelphia Performing Arts: A String Theory Charter School, whatever that is. I then walked a very long way to the Eastern State Penitentiary. I could have used my car, but I really didn’t want to navigate the streets of Philadelphia any more than I had to. Also, I’ve watched many episodes of Parking Wars so I know what hell is in store for you if the Philadelphia Parking Authority tickets your car.

The Eastern State Penitentiary is a very creepy, old prison, which exists in a state of partial ruin. It is popular during the Halloween season for haunted tours. A prison is not my idea of a fun tourist attraction but this place was genuinely spooky and gothic. I had to use an audio device for the tour since it was part of the deal, but it was a self-guided tour. Actor Steve Buscemi narrated the audio tour. I walked through many cell blocks and saw many cells filled with debris. I saw Al Capone’s cell which had some furniture and creature comforts. This attraction didn’t really fit the cultural focus of my trip but it was very interesting. 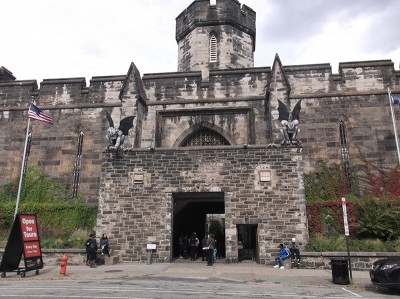 Across the street from the Eastern State Penitentiary I found the Bookhaven book store where I went on a mad buying binge. I bought five books:

All of those books are plays except for the Henry James novel. Drama is my favorite form of literature.

I walked all the way back to my hotel which was an extremely long way to walk. I had to remove my socks and massage my feet after all that walking. I took an aspirin to keep going. When I was ready to go back out, my immediate goal was to resume the search for some more theaters. But first I had lunch at Cafe Cret on the Benjamin Franklin Parkway. I ordered a Cuban sandwich (toasted), a Yogurt Parfait, and a medium café au lait. This proved to be a big meal but I was very hungry so I ate it all. I went back to Sansom Street and managed to find the Liberti Church where Azuka Theatre should have been but I found no sign of any theater posters around the church. I walked to Rittenhouse Square and took a few photos in the park before finding the Plays and Players Theatre, a major goal since 1812 Productions uses that theater and it was one of the original Little Theaters in America. Philadelphia playwright George Kelly based his slapstick comedy The Torch Bearers on this theater.

I then went back to Rittenhouse Square and entered the Barnes and Nobles book store there. I bought three more theater books:

Disgraced was the play I saw the previous evening. Race was the first play I saw on Broadway. And How I Did It: Establishing A Playwriting Career is obviously of great interest to me since I am writing plays. This entire trip was a reward for finally resuming my writing. I finally finished the play I began for the online playwriting course I took with the instructor Brooke Berman, although I only made it an one act play, and I wrote a 10 minute version of my shaman play for submission to the Humana Festival of New American Plays. Eventually that play must be longer because I think it will be my most significant work.

From Rittenhouse Square I walked north to Logan Square and then back to my hotel. For two hours I copied photos from my camera to my laptop and went online to check my email and update a few social media web sites with my news. This evening was the much anticipated highlight of my trip, the performance of Antigone at the Wilma Theater.

I was eager to see the Wilma Theater since it has a reputation for avant-garde performances. The lobby had a wall of black and white photos of past shows. I’ve always liked theater photos which usually seem highly suggestive. The Wilma Theater’s photos were particularly intriguing. During this trip I got the great idea of creating some fake theater posters for my plays. I could use my graphic design knowledge to create a typical poster of a fantasy show. Unfortunately any performance of one of my plays may have to remain a fantasy. I snagged as many theater brochures as I could to add to my research of Philadelphia theater.

Antigone by Sophocles was directed by a Greek director, Theodoros Terzopoulos. I thought it was the greatest performance I have ever seen in the theater! Of course, it was the only avant-garde performance I’ve ever seen. The show seemed very profound and mysterious to me. It was very symbolic so I was able to give everything a grander interpretation than a more conventional staging would indicate. The actors used very precise body movements so their performance resembled modern dance. Maybe a fan of modern dance would have found it more hackneyed, but it seemed very strange to me. The only thing I could compare it to is Steven Berkoff’s Oscar Wilde’s Salome which I’ve seen on DVD. Some of the slow motion action was similar. The Greek Chorus kept up a physically demanding exhalation, like a prolonged gasp of horror. And the leader of the Greek Chorus stood stock still under a hanging knife, chanting furiously. It was all very surreal.

The actor playing Creon was sitting right in front of me before the play began. I was sitting in row B so I was often very close to the actors. Part of row A was used as Antigone’s tomb. Creon was played by a Greek actor, Antonis Miriagos, and he was very intense. He was the most expressive actor in the cast. However, all of his lines were in Greek and you had to read subtitles projected above the stage to understand him. The lines in English were spoken to make every syllable distinct so it sounded very harsh and overly punctuated.

This play was virtually a ritual. The Philly.com review claims Antigone invokes a theatrical netherworld which is an excellent description. It was like a glimpse into a eerie netherworld where the tragedy was being mourned for eternity. I think you have to be familiar with the story to appreciate this play because the highly stylized performance does not allow you to get the story from the action. There was an onstage narrator to provide some of the background information.

Wilma Theater’s Antigone made quite an impression upon me. It was really dreamlike and offered the profound mystery I seek in the theater. I’m tempted to steal from it for my shaman play which needs a good attempt at performing a ritual. The desperate chanting by a mysterious and tragic figure was great. It is always thrilling when something supernatural is brought onto the stage, like a ghost, to haunt the audience.

So my second day in Philadelphia was an outstanding cultural experience. I saw all the great artwork of the Barnes Collection and the great artistry of the Wilma Theater.