Day three of my Collette tour of San Francisco was dominated by a ride on the Napa Valley Wine Train. But first I had breakfast at Bin 55, one of the restaurants in San Francisco Marriott Marquis. I almost got charged for breakfast which would have been over $38.00! This was one of the meals that should have been included with my tour. I made sure to straighten that out after the price gouging I suffered the day before.

We drove over the Bay Bridge on the way to Napa Valley. I saw the old span of the bridge which was being demolished. We stopped briefly on Treasure Island to take some photos of the San Francisco skyline across the bay, but the morning was a bit foggy. The bus driver also slowed down at the spot where you can look down at the Bay Bridge so I got some good photos there. I had to shoot through the bus window but you can’t see any evidence of that in my photos. It was very grey and dismal but I can fix that a little using Photoshop. 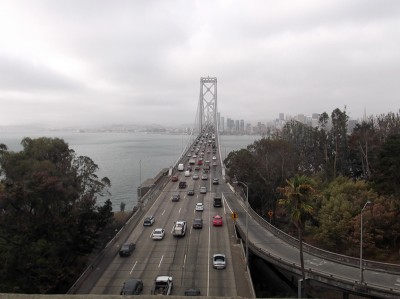 The landscape of Northern California is very interesting to me because the vegetation is quite different from the East Coast. The hills in California are mostly tan with dead grasses but there are also some dull green trees. There are many palm trees and eucalyptus trees which are very exotic to me. I think we also went through Sonoma Valley with vast vineyards. It is hard to describe the scenery since I don’t know the names for California plants and geography. But I saw California coastal prairies which are grasslands. I saw what looked like a dusty ranch from the Old West, vast farmlands with nothing but dry brush visible. I find vast prairie lands a little frightening since it seems like you are a very long way from the slightest sign of human habitation. I can just imagine the endless trek you would face if you were abandoned out there. 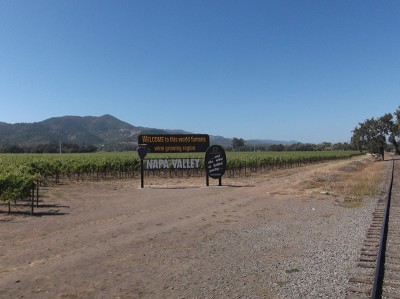 The Napa Valley Wine Train was a long and relaxing ride. Our tour group was the last to board the train. The train passed the back yards of trailer homes on the way out of Napa. These were distinctively California trailer homes which looked like the 1950s style of mobile home with attachments that obscure their origins. Then we began to pass many vineyards. I could even see bunches of grapes on some vines. Some vineyards had fancy houses, rustic cottages, or elaborate ranch houses but it was basically lonely stretches of vast farmlands. We got to taste some wine, only a half a glass of a red or white wine, and enjoyed appetizers. For lunch I had the soup du jour which was lobster bisque, mustard rubbed pork tenderloin, and crème brûlée for desert. The food was gourmet quality just like on the Tioga Central Railroad of Wellsboro. This reminds me that I’ve been reading some of the travel books by Paul Theroux. He is famous for writing about train travel. I’m currently reading The Great Railway Bazaar so this train ride was a small taste of what he describes.

I finally had an evening free to do something on my own in the city. I took a BART train to the Mission District. This was the first chance I got to use my Clipper card which finally registered the added value I put on my card. Once I reached the Mission District I walked along 24th Street to the Modern Times Bookstore where I bought two books; The Dramatists Guild Resource Directory for 2012 and Torch Song Trilogy by Harvey Fierstein. I was particularly keen on finding theater books because I’ve recently completed an one act play which I started while attending the Primary Stages online playwriting class. I’m through writing ten minute plays. I think I will only write more substantial works like one act plays. I plan to write the definitive shaman play next. 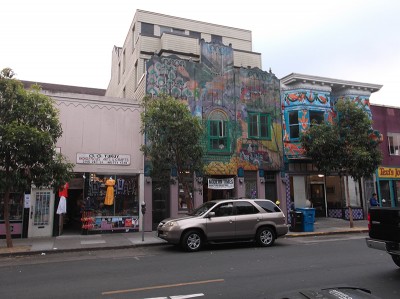 There are three more major cities in the United States I want to visit; Boston, Chicago, and Los Angeles. I have already begun to gather notes on Chicago and Los Angeles. I think Los Angeles might be my next destination because I’m more excited about seeing Hollywood than anything else. While San Francisco’s technology companies provided the inspiration for my trip to Northern California, playwriting will provide the inspiration for a trip to Los Angeles. Writing plays is closely related to writing other types of scripts for film and television. Personally I think writing a screenplay on spec is a stupid pipe dream, but there is a lot of crossover with the playwright community. Anyway, I already have an association with First Stage in Los Angeles because I paid them to do a reading of one of my short plays.

I wanted to fully explore the Mission District but since I had such limited time on my own I only walked along 24th Street. However, I did see many Latino murals, two other bookstores; Adobe Books and Alley Cat Books, Mixcoatl Arts and Crafts, and Precita Eyes.

Anyway, after that quick trip to the Mission District I went back to my hotel and then walked to North Beach. I really wanted to visit City Lights Bookstore again. I bought two books there; The Playwright At Work and The Chickencoop Chinaman / The Year of the Dragon: Two Plays by Frank Chin, a San Francisco playwright. The performing arts books are located in the basement where it was so hot that I was dripping with sweat while I examined every single theater book they had, trying to decide on the best ones to purchase.

I had diner at a good seafood restaurant, Caffe Sport on Green Street. This is a Sicilian restaurant although most of the waiters seemed to be Latinos. The interior was filled with painted furniture and woodcarvings, an eclectic, kitsch-filled setting according to Google. I had a glass of white wine. There was a house sauce for bread dipping which I mistook for soup so I ate it all without using bread. I think I ordered Cioppinno al’ Antonio, stewed seafood in white garlic sauce. There were shrimp, crab claws and one crab leg, mussels, clams, calamari (squid body rings like rubber bands), and baby octopus which I avoided eating because they are also rubbery and tasteless. This was a great meal and didn’t leave me feeling too full. It was great to be out and about the city late at night. I saw the strip clubs on Broadway which is the center of nightlife in San Francisco. The Transamerica Pyramid was not lit up as much as I expected but the Sentinel Building was floodlit so I tried to take many photos of that. Unfortunately my camera does not take good photos in low lighting or at night. Everything tends to look blurred.

After finally getting some time on my own to wander around the city I was more satisfied with the trip.