Yesterday I made my third trip to Jim Thorpe PA, my favorite small town in Pennsylvania. Jim Thorpe is the prefect realization of everything that is charming in small town Pennsylvania. However, the major goal of this trip was to visit Lehigh Gorge State Park since I never really ventured into the park on my previous trips. Reaching the Glen Onoko Access Area was slightly difficult. You have to cross the 903 bridge over the Lehigh River over to East Jim Thorpe and then find the road that winds along the Lehigh River.

I noticed the progress being made on the new Jim Thorpe Memorial Bridge that is going to link Routes 209 and 903 in Carbon County. This will replace the current bridge which does look pretty old and decrepit. Unfortunately, I don’t think the new bridge will improve the traffic bottleneck that exists from having a bridge on the narrow mountain road into town.

There are several parking lots in the Glen Onoko Access Area but they were almost completely full even though I left early to reach the park at 9:00 a.m. I was particularly eager to see the Turn Hole Tunnel, an abandoned railroad tunnel which now exists as a sort of cave in the cliff above the river. However, I did not know exactly where to park to find the trail to this tunnel and I parked near a railroad bridge at first. I walked across the bridge and found a trail to one of the old canal locks. I explored that trail for a short while and then I went back to my car and drove further along the park road. Eventually I reached the bridge from which you can see the Turn Hole Tunnel and I tried to park at the Glen Onoko Falls Trail trail head but it was full so I had to turn around and park at the nearest parking lot. This turned out to be the right place. There is a very short trail from that parking lot to the tunnel entrance.

The Turn Hole Tunnel was so dark I could barely see the obstacles on the floor of the tunnel. There are a few boulders and buried railroad track ties which you can stumble over. There is a railing to prevent you from falling off the cliff into the river. In the middle of the river you can still see the piers of the old bridge which used to be there. The Turn Hole Tunnel was pretty neat. It was like being in a large cave. 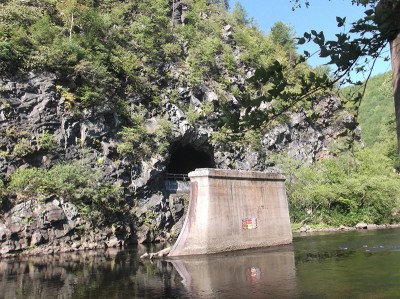 My next goal was to hike the Glen Onoko Falls Trail. I saw the trail head on the other side of the river when I was trying to find a place to park, so I just had to walk over the bridge to get there. The Glen Onoko Falls Trail has a ridiculous number of trail signs to discourage you from hiking the trail. I saw several trail signs that read “Caution, Dangerous Trail” and “If you don’t have appropriate hiking boots, turn back now.” There were even signs warning you that people have been seriously injured or died on this trail. I climbed part of the trail and saw a few waterfalls. The trail was extremely steep in places and I gave up on it because it was exhausting and all the dire warning signs had me spooked. I don’t think I saw the major waterfalls but I saw enough to satisfy me. Back at the trail head I noticed a path to the river bank where you can take photos of the Turn Hole Tunnel. I overhead some other hikers speaking German which is proof that the Lehigh Gorge State Park is so popular it even attracts foreign tourists.

By then it was 10:00 a.m. and I had enough of hiking. I was eager to head into town. I parked in the large parking lot near the train station. It was still $6.00 to park there. I immediately bought a ticket for the 11:00 a.m. excursion train. I paid $18.00 for an open air car, a dollar more than I paid last year. Since it wasn’t quite time for boarding the train, I went to the rest room in the Visitor’s Center in the train station and picked up some brochures and a Jim Thorpe travel guide. I won’t describe the train ride since it was exactly like the first trip I made. I probably won’t bother with the excursion train on future trips to Jim Thorpe since it is very repetitive, although still kind of fun. 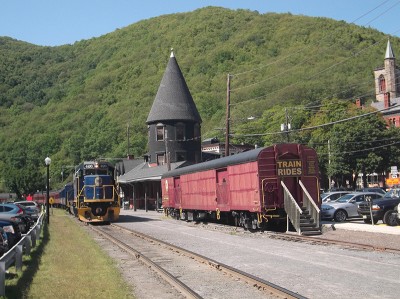 When the train returned to the station I was eager to do a little shopping and have lunch. First I went to Sellers Books where I bought a copy of Raymond Chandler’s Farewell, My Lovely. I don’t usually read mystery or crime novels but I may make Los Angeles my next big trip and Raymond Chandler is one of the writers most closely associated with Los Angeles. I picked a different restaurant for lunch, Tony Stella’s Encore, which is a charming little restaurant in a few rooms of an old house. I felt like I was having lunch in the parlor of a Victorian house. This restaurant also has an absinthe bar and sells absinthe drinks. I ordered the Death at Dusk drink which was extremely potent. This drink was a deep blue fading into purple so it really did look like dusk. It left me feeling so drunk that I had to wait over two hours before I could drive. For lunch I ordered a Classic Bacon, Lettuce and Tomato sandwich. It was excellent and came with some fries. 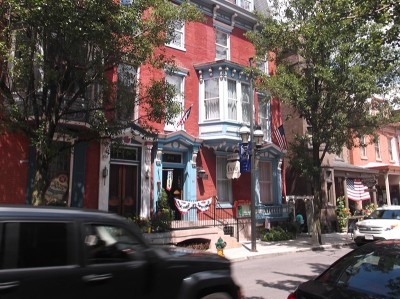 After lunch I was barely functional from the effects of the Death at Dusk drink but I did make it to Soundcheck Records where I bought a blues CD, Let Me Squeeze Your Lemon, the Ultimate Rude Blues Collection, which I thought might prove to be very amusing.

I returned to my car to stash my purchases but I didn’t feel sober enough to drive. I walked back up Broadway and climbed the Hill Road, looking for the Switchback Trail. This proved to be too far to walk to, but along the way I did notice the ruins of a stone mansion hidden in the woods along the road. I climbed a small path and took some photos of the ruins because you rarely come across ruined buildings. It reminded me of the ruins in the Roman Forum which I saw on my trip to Italy. 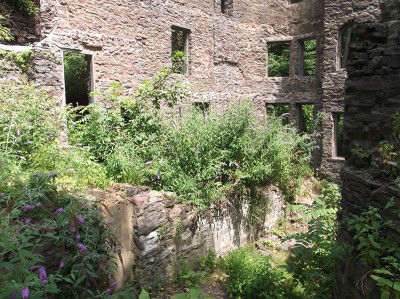 Back on Broadway I explored the Anita Shapolsky Art Foundation, an art gallery of Abstract Expressionist art in a former Presbyterian church. This is a curious establishment to find in a small town in Pennsylvania. It is further evidence of how touristy Jim Thorpe has become with slightly more upscale boutiques than you would expect. On the second floor there were impressive stain glass windows and many larger works of art and sculpture in a deserted nave. Apparently this foundation is associated with the Anita Shapolsky Gallery in New York City which specializes in the New York School of Abstract Expressionism. I take this as evidence of how popular this town has became with artists from New York City.

At some point, I went into a book store run by the friends of the Dimmick Memorial Library. This seems to be a permanent establishment and not a temporary sale because I saw the place on previous trips. I found a travel book On The Shore Of The Mediterranean by Eric Newby which only cost me $1.00. I’ve been reading many travel books lately, even for places I have no intention of visiting. Travel writing tends to focus on adventure travel to exotic places where the traveler risks death to brave the elements. I would prefer to read personal narratives on obscure and mundane destinations but nobody writes about that.

At around 2:00 p.m. I finally felt capable of driving and left Jim Thorpe. But instead of heading directly home I did have one other establishment I wanted to check out. I drove east on Route 209 to Country Junction, the world’s largest general store. This is a huge place full of crap goods. I wandered all over the immense structure and could not find anything I felt even remotely like buying. It was a complete waste of time except for the pet store and the overall atmosphere of country kitsch.

Recently I came across a novel set in Jim Thorpe, Mauch Chunk: A Novel of 1968 by Richard Benyo. I ordered this book on Amazon but it has not arrived yet. I was expecting to see this book for sale somewhere in Jim Thorpe but I did not see it at Sellers Books or Soundcheck Records.

I’m tempted to spend some quality time in Jim Thorpe, maybe book a weekend at one of the many bed and breakfasts, but it is an extremely small town with not a lot to do. On this trip I tried another restaurant, checked out the art gallery, and discovered some ruins but it was otherwise quite repetitive. I suppose I could see a show at the Mauch Chunk Opera House if I stayed overnight.