Yesterday I made an expedition to Bloomsburg, a small city located in the depths of Pennsyltucky. I made this perilous journey into uncharted territory to see what can be found there. I’ve often driven past Bloomsburg on Interstate 80 while on my way to New York City, the Poconos, or Philadelphia.

The most interesting thing about Bloomsburg is the Bloomsburg Theatre Ensemble. I began my research on this city five years ago so this trip is long overdue. I still don’t have much in my notes on Bloomsburg. Bloomsburg is a college town. But I did not venture onto the Bloomsburg University campus on this trip.

The first thing to do when visiting a city is to find a place to park. I drove down a narrow alley at the first parking sign I saw. I parked behind the post office near West End Ale Haus. I found a parking stall with a parking meter and put in two quarters for two hours of parking. This was only a block down from Market Square. Market Square has a Civil War monument and a large fountain which is one of the most distinctive features of the city. 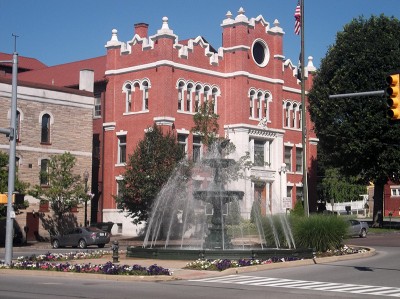 I walked up Main Street all the way up to East Street taking photos of establishments which have not previously been documented on the Internet. Very few photos of Bloomsburg existed prior to my expedition so I was eager to document this virtually unknown corner of the world. I will upload all of my photos online so future explorers will have better information to guide them on their trips.

At 10:00 a.m. I was ready to visit my first establishment, Endless Records. Virtually nothing is known about Endless Records. They don’t even have a web site. The store is quite small and mostly sells vinyl records. However they did have some used DVDs and CDs so I looked through those. I bought Alien from L.A., a 1988 science fiction film which somehow has escaped my attention until now. I also bought a CD, Murder Ballads, a studio album by Nick Cave and the Bad Seeds. It seems appropriate to make these media discoveries while on my expedition to Bloomsburg, the unknown city.

After returning to my car with this purchase I immediately went back up Main Street in time for the opening of The Cloak and Dragon Bookstore at 10:30 a.m. This is another establishment shrouded in mystery. No photos of this book store’s exterior can be found online so I took several photos for my notes. This used book store has a small stock of books but I did find a copy of Iain Banks’ The Player of Games, a science fiction novel I’ve been looking for so I was pleased to acquire it here. 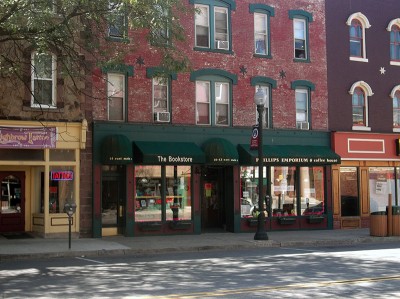 The Cloak and Dragon Bookstore 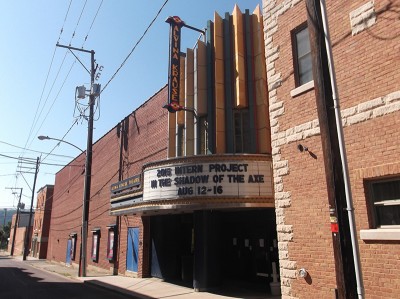 I was going to have lunch at Capitol Restaurant, a restaurant in a converted movie theater, but they did not appear to be open so I ate at the Bloomsburg Diner instead. I ordered a Coke and a sausage egg muffin. I saw several other restaurants which I will need to add to my notes. It was hard to tell which ones were open. I’m glad the weather allowed me to visit Bloomsburg on Saturday instead of Sunday because the town is probably completely dead on Sunday morning.

I did make a few other observations. There was a small farmer’s market taking place near the Civil War monument. I think there were only five or six produce vendors.

Before going home I went to the Columbia Mall. This proved to be a waste of time because that mall was in really bad shape. It was practically empty except for its anchor stores. Well over half of the smaller stores were either shuttered or empty. There were very few restaurants. I did enter a sporting goods store to look for waterproof hiking boots but I could not find a salesperson. I’ve heard that many malls are dying but this is the first one I’ve seen in such a shocking state of decline. Our own Lycoming Mall seems to be doing quite well. It still has a book store and a DVD store so I still like to visit our mall. In fact, I went to the Lycoming Mall before going home.