Today I made a long overdue trip to State College PA. State College is only an hour’s drive from Williamsport but I’ve never been there. This trip was further proof that there are still some fun and interesting things for me to see and do in Pennsylvania.

Approximately half of State College is taken up by the Pennsylvania State University campus. I’m tempted to cite this as a perfect example of an university swallowing up a town but I suspect the town grew up around the university, based on the town name. I might be considered an alumni of Penn State since I graduated from the Williamsport Area Community College which is now the Pennsylvania College of Technology, affiliated with The Pennsylvania State University. State College has been in the national news often due to the Jerry Sandusky scandal. I think it is a great tragedy that Joe Paterno suffered the loss of his legacy after reaching a ripe old age. Just think, he spent all those years bringing glory to Penn State only to have his achievements negated just before he died. The only impact this had on my trip is that I could not take a photo of the Joe Paterno statue because it has been removed.

It just so happens that the Central Pennsylvania Festival of the Arts was taking place on the day I finally got around to visiting State College. At first I was vexed because I wanted to explore the city on a quiet, typical day but this did give me an additional reason to travel to State College. I was particularly enticed by the BookFest but it was devoted to comic books. Because of the arts festival, I parked near the Bryce Jordan Center and took a shuttle bus to the downtown area. The local media warned me that the parking garages downtown might be full for the festival and I did see that this was the case.

After the shuttle bus dropped me off downtown, I walked a few blocks taking photos of establishments but there were a lot of festival booths that got in the way. For example, the Penn State Downtown Theatre Center had a festival booth set up in front of it so I could not get a good photo. Eventually I wandered onto the Pennsylvania State University campus and took some photos of Old Main. I managed to find the Nittany Lion Shrine but there was a crowd of people around it and I had to wait in line to take my photo. This is supposedly the second most photographed site in Pennsylvania after the Liberty Bell. 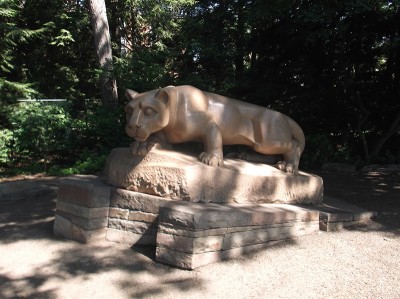 I continued to walk around the campus until I found a few theater buildings and came across the Palmer Museum of Art which is open to the public. The Palmer Museum of Art is probably the finest art museum in Pennsylvania between the major cities Pittsburgh and Philadelphia. But it was a fairly small museum with just two floors of exhibits and not many galleries. The collections included everything from medieval art to modern art, Asian pottery to Peruvian pottery, but there was often only a few pieces to represent an art era. The most noteworthy painting I saw was a Philip Pearlstein nude (he was known for his Modernist Realism nudes). Visiting such a fine art museum gave me the impression that I was on a real trip and not just doing a boring bit of domestic travel. Their special exhibit was Luminous Allure: Studio Glass from the Collection of Audrey and Norbert Gaelen which reminded me of glass art work you can see at the Corning Museum of Glass. 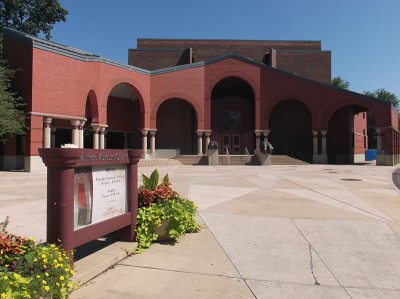 The Palmer Museum of Art

When I left the museum I found the Pavilion Theatre and then the Penn State Berkey Creamery. The creamery is famous for its ice cream. This is where I had lunch. I picked up a boxed sandwich, tuna salad on a croissant, and ordered a Peach Paterno milkshake because I was very hot and thirsty.

The Pennsylvania State University campus was huge and quite impressive. Many of the buildings were massive and architecturally interesting. I have a peculiar fascination with college campuses. I have dreams where I go back to college to earn a redundant degree. The college campus is never the same in my dreams, but often takes a strange form which is surprisingly realistic, like the work of a great architect. Perhaps my visit to the Pennsylvania State University campus will furnish new material for my dreams. I sometimes wake from these dreams with an intense longing for my school days. I don’t think my college experience was particularly fulfilling. I got more intellectual stimulation from the college library than my classrooms.

I eventually found my way back downtown to wander around the art festival booths. There was a surprising number of art festival booths. I walked up several blocks, then over a block, and back down several blocks. I was unable to resist buying a $20 art print of a particularly lovely watercolor of trees. This artist had won a blue ribbon so I wasn’t the only one to be entranced by the beauty of her art. She was Z. L. Feng from Radford, VA.

Actually, before I explored the art festival booths I went to Webster’s Bookstore Cafe, the only used book store in State College. I wasn’t too impressed by this book store since it was located in a basement and had a terrible selection of used books, they all seemed to be extremely used (in the sense of being shabby). After struggling to find any book worth buying I settled for a programming book, CodeNotes for C#. I also entered a Penn State souvenir store were I saw the book Paterno Legacy: Enduring Lessons from the Life and Death of My Father for sale. I’m not a big sports fan so I bought a Nittany Lion stuffed animal instead. The problem with Pennsylvania State University is that it is a football university. They are nuts about football. They do not glorify the intellect or academic achievement the way they glorify football. Beaver Stadium is the most massive building on campus. The stadium is so massive that it is the second largest stadium in the Western Hemisphere and the third largest in the world. 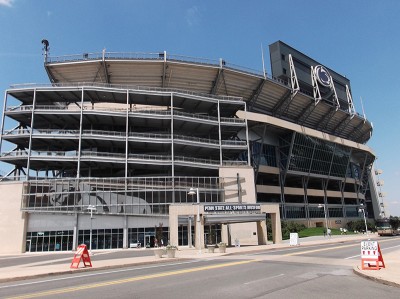 I’m glad I finally visited State College and Penn State. You do hear a lot about this city and university in Williamsport. The Central Pennsylvania Convention and Visitor Bureau even includes a few Williamsport attractions in its travel brochure. In addition, I think some of the Pennsylvania startup community is based in State College so I should familiarize myself with the city for future Information Technology opportunities.