For my last day in San Francisco I had no specific plans. I decided to just visit a few places I had not seen yet. My first goal was to was to find the Hallidie Building which was the first American building to feature glass curtain walls. I saw a NBC truck parked up the street from my hotel with “We Investigate” written on its side. This vehicle was probably there to cover the U.S. Conference of Mayors. I walked to the Powell Street Station and took the MUNI subway to the Montgomery Street Station. From there it was easy to locate the Hallidie Building and I found the Crocker Galleria nearby. I also planned to explore the downtown shopping malls later on in the day after they had opened.

I found a CVS Pharmacy where I bought a small bottle of Bayer Aspirin and a small stick of CVS Sunscreen. I can tell from the receipt that the San Francisco bag fee is 10 cents. I used the self checkout machine. My receipt also gives me the precise time I was there, June 20, 2015 at 8:59 a.m. and the address of the store 581 Market Street.

I returned to my hotel with this purchase and then went out again to seek the Ina Coolbrith Park. I went to the Powell Street Station and bought a single ride ticket to the cable car. This time I made sure to keep the ticket in my other pocket without my point and shoot camera which I was always taking out. I waited over an hour to get on a cable car but I did see the famous San Francisco eccentric Frank Chu while waiting in line. There was also a gathering of police at Hallidie Plaza for some reason. I saw an Asian street preacher screaming at people about the bible. He even screamed at the police who seemed to tolerate him with amusement. After finally getting on the cable car I only managed to get off at Columbus Avenue.

As long as I was in North Beach again I decided to check out a few more things in the neighborhood. I had lunch at Caffe Greco. I had a smoked salmon bagel and a latte. Then I went to Washington Park and found the Bob Kaufman Alley. Bob Kaufman was a Beat poet. I finished reading his Ancient Rain book just before my trip.

I was finally ready to find Ina Coolbrith Park. The park entrance proved to be hard to find. I think I mistook the Vallejo Street Stairway for the park entrance because I did climb a steep set of steps on Vallejo Street. But I eventually found Ina Coolbrith Park. This must be one of the hidden gems of San Francisco since it offered spectacular views of the downtown skyscrapers, yet it was a relatively quiet place with only a few tourists about. The park was beautifully landscaped and gave me several opportunities to get some foliage in the foreground of my photos. Ina Coolbrith was a Bohemian poet who is completely forgotten today. 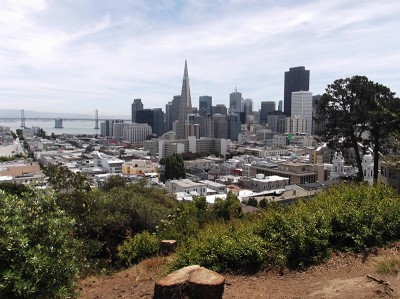 After spending a fair amount of time in the park I returned to Columbus Avenue and took my best photo of the Kenenth Rexroth Alley street sign. The alley itself was of no interest whatsoever. I had lunch at L’Osteria del Forno where I ordered two limonatas and lamb which was served on a skewer. The lamb was full of gristle and it took me a long time to chew it enough to swallow. I rarely eat lamb so I don’t know if this meat is always like this. I could not resist returning to City Lights Bookstore and buying one final book, Kenneth Rexroth’s One Hundred Poems from the Chinese. At least it was a thin book of poetry. I did notice that other travelers had much bigger pieces of checked luggage than mine. I’ve recently bought the biggest piece of luggage I could find at Walmart so I’ll have more room for bringing back books from my trips. 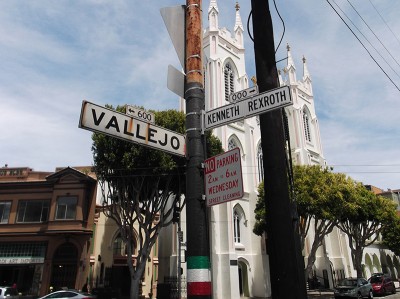 As usual I walked all the way to Market Street and took the MUNI subway from Montgomery Street Station to Powell Street Station. For my final few hours in San Francisco I decided to just walk along Market Street. I came across the San Francisco Chronicle building which I had forgotten about and the nearby Mint building. I entered the Westfield San Francisco Centre and wandered around without buying anything since there were no stores where I could buy books or DVDs. I also revisited Yerba Buena Gardens and took some better photos. I walked all the way up Market Street to the Ferry Building and then explored the Embarcadero Center. I bought a vanilla and strawberry milkshake at Over The Moon, a small ice cream parlor.

When I arrived back at my hotel I encountered an even larger street protest against police brutality. I even saw Frank Chu again at this protest. This protest was taking place at the intersection of Taylor Street and O’Farrell Street so it was hard to avoid. I was worried that it would delay my departure. I checked out of my hotel at 9:00 p.m. even though my flight did not leave SFO until 12:22 a.m. The front desk suggested that I get a taxi at the taxi stand in front of the Hilton Hotel. The only final detail to report is that I ate dinner at the Yankee Pier SFO where I ordered a lemonade and fish and chips.

I will be going back to San Francisco in September. This trip is with Collette Tour and will only use San Francisco as a hub for excursions around Northern California. The only reason I booked this tour is because it would give me a chance to see more of California. On my own, I would not venture far from my destination city.

One Response to Last Day In San Francisco